So we finally made it! Myanmar was definitely top of my list before starting the tour and it’s a country I’ve been looking forward to seeing for quite some time.

It’s the first time we’ve been forced to take a flight, as the land borders are supposedly extremely difficult to negotiate and in some cases it’s not even possible to travel further once you go over the border, so you have to take a short inland flight. We’d roughly looked at what sort of dates we’d like to fly on and thanks to the fact that our schedule is very flexible we were able to find cheap flight with Air Asia originating from Bangkok’s smaller Don Muang airport. It used to be the main airport up until 2005 and now serves the Asian version of Ryanair, Air Asia.

We’d had a light brekkie in the hotel before leaving for the airport but once we got to the terminal I began to feel really unwell, headaches and strong cramps in my stomach. The flight itself was short and sweet, but upon arrival I was in need of the toilet and thankfully there were ones located before the massive immigration queue. We changed some Euro that I had into the local currency and got a taxi to the center of the city. Once the doors to the airport opened i was engulfed in the draft of heat. It was around 2 pm and 37 degrees. The taxi ride took almost 45 min and the first thing you could see in the surrounding areas was a sit that we would soon become used to; non-stop construction sites. I kind of had the surreal feeling like id just entered a country not long from the ending of a war. The buildings looked extremely run down and the was scaffolding and diggers and builders everywhere.

We’d been warned that accommodation here is more expensive than in the other south east Asian countries and that what you actually get is of a poorer standard. Our hotel was $26 a night, very basic, but good for a clean and comfortable stay. I was feeling worse and worse and was only interested in a bed and a bathroom. Needless to say I spent the rest of the day in the room and was too weak to go outside. Thankfully Steffi was able to get some things for us and a good night’s rest was just what the doctor ordered. 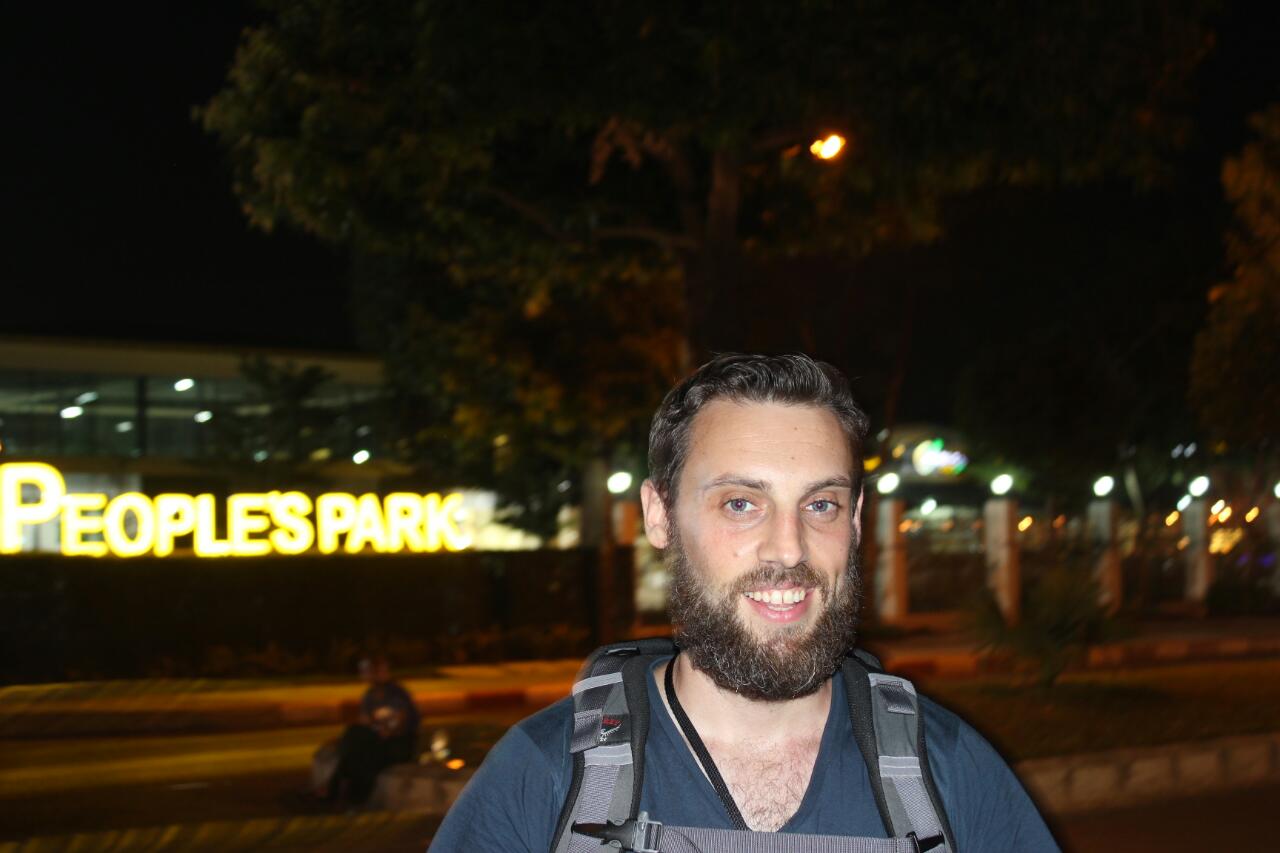 What a great park

We ventured outside on day two in Yangon and specifically tried to get out and about as early as possible to try and avoid the heat. Yangon is very easy to navigate as the streets are built in straight lines. 3 big streets run east/west and then loads of smaller streets run north/south. Those smaller streets are lined with food stalls and vendors of every kind imaginable. It’s really difficult to actually walk on the streets due to the ongoing construction so you are often forced to walk with the traffic, of which there is an unbelievable amount. We just wandered for about 2 hours and then returned towards the hotel stopping off many times to get as much water as possible into our systems. Back at the hotel around midday we just laid back and rested up. “Mad dogs and English men go out in the midday sun”, so goes the saying at least so we weren’t too pushed about missing out on the sweltering heat for a few hours. We’d already booked a tour of the city at 4 pm so used the time to either siesta or plan out the next steps of our trip.

The tour itself was really nice. A Danish girl living in Yangon was the main guide and a local young guy from Myanmar was like the assistant guide, giving us more cultural insights and describing things such as the national dress here in the country (a kind of long skirt worn by all men and also by women – it actually looks really cool), or why women have yellow paste on their faces (both as a beauty product and as a sort of suncream.) The Danish girl, Sandy told of lots of interesting pieces of information about the history of the buildings, hotels and places in the city and the group was a really nice mix of people from all over the world. I even met a girl from Taiwan, something important for the next stage of my tour!  We finished the tour back where we started at around 18:15 and Sandy gave us a few good tips for places to eat as we’d worked up quite an appetite. 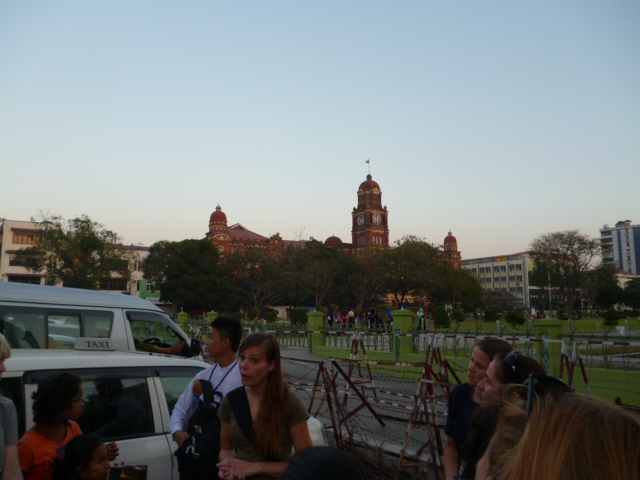 Our tour start and finish point and our Danish guide 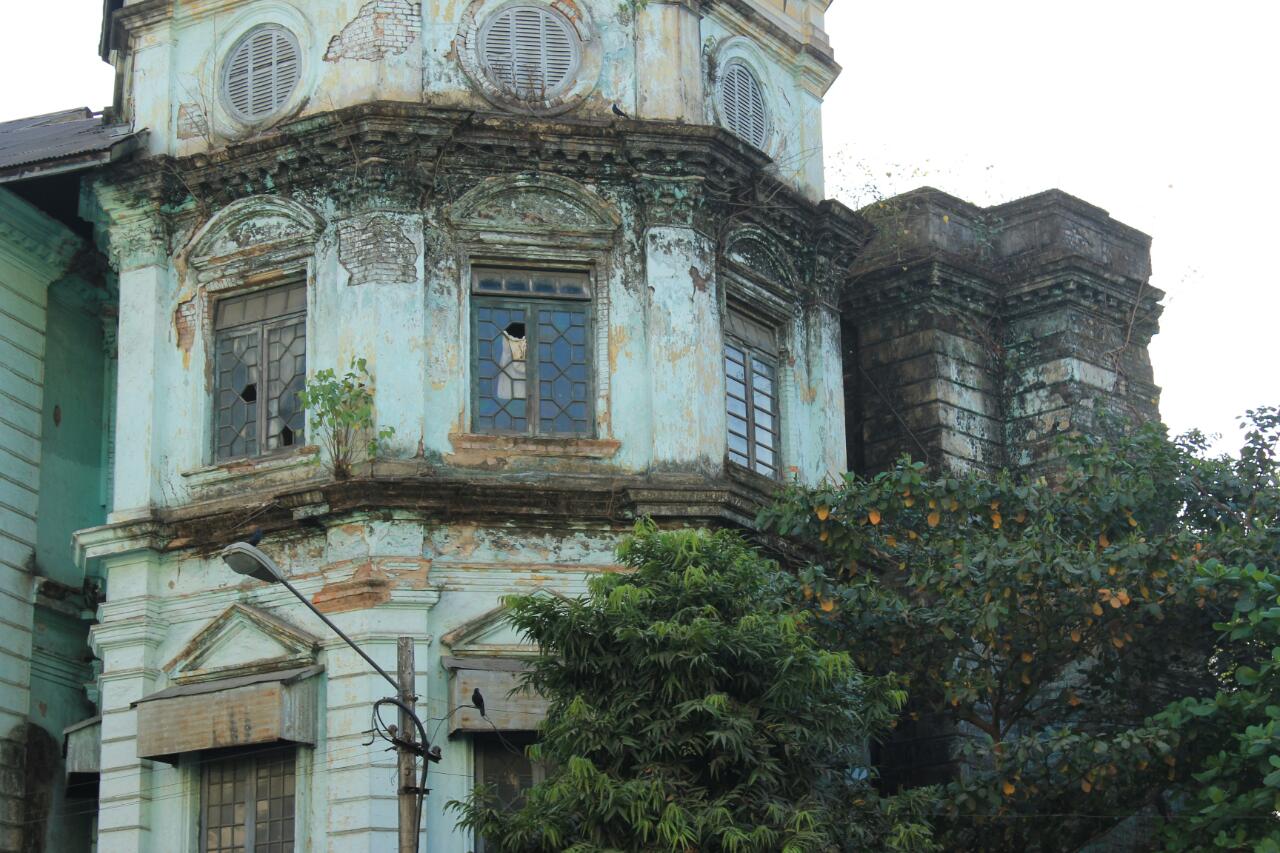 Some amazing architecture in the city 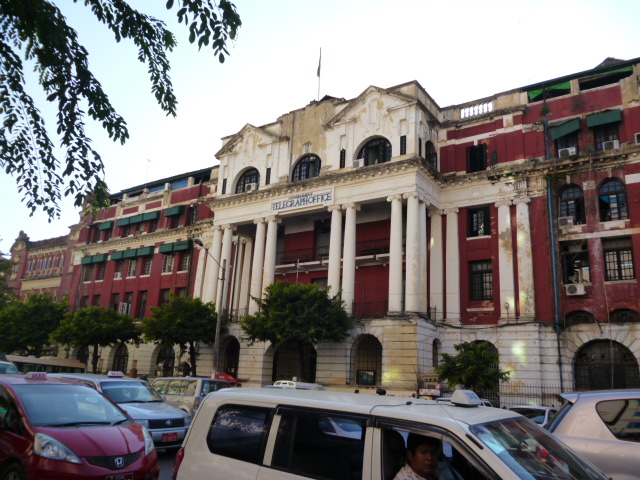 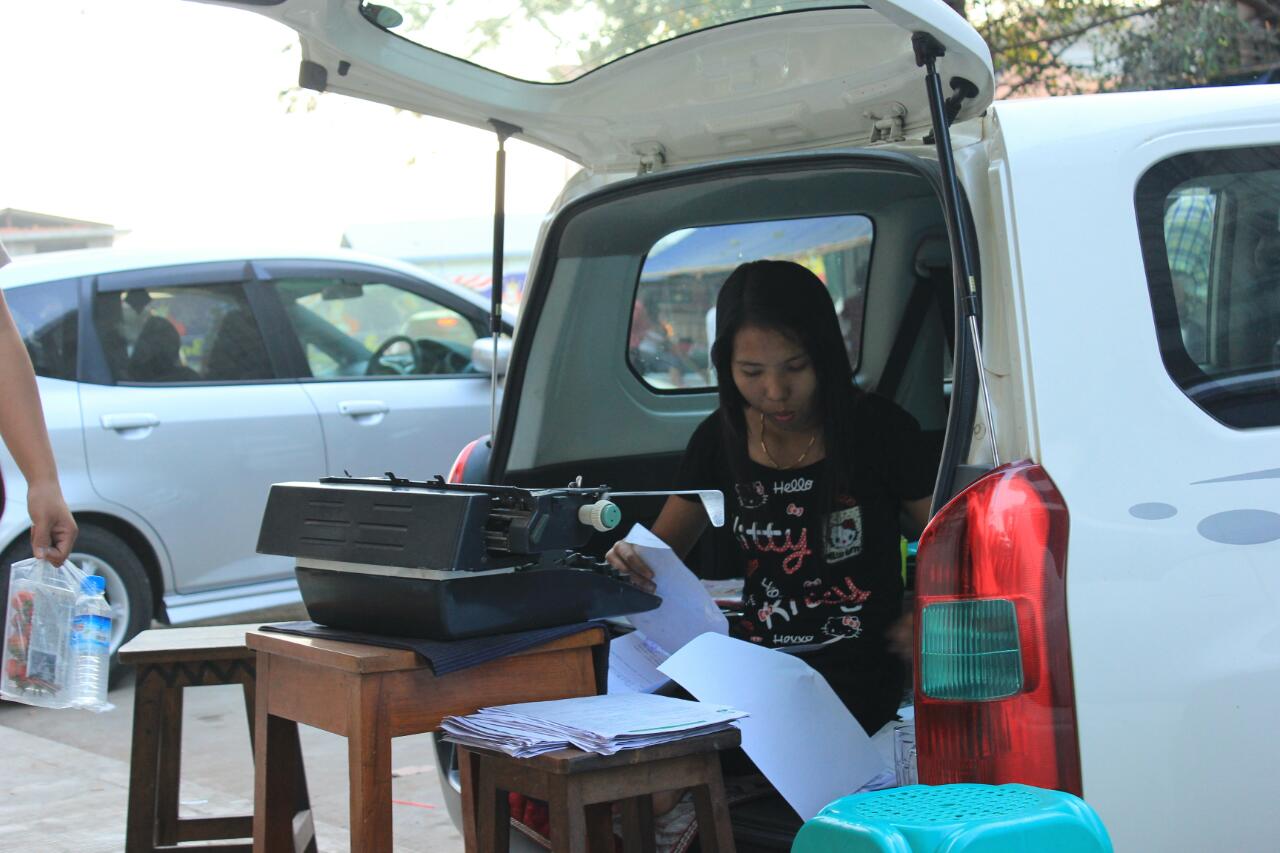 These women use old school typewriters to make legal documents. If you need a legal document you can come to these street lawyers

We hoped into a taxi and made a beeline straight for the most famous sight in Yangon, the massive Pagoda/temple on the hill. It was about 3 km away and so taxi wad the best option. At €2 it was also a bargin! The Pagoda is built on a small hill and lit up at night is really a sight. It’s so completely overrun with tourists, both foreigners and locals but it’s well worth the visit, check out the photos. After the Pagoda we made or way to one of the restaurants recommended by Sandy. With help for a super friendly local man we navigated the best way to walk there. “The house of memories” is a superb restaurant set in an amazing colonial house and serves a mix of local and western food. A bit pricier than we would be used to but a nice treat and a great end to a wonderful day. 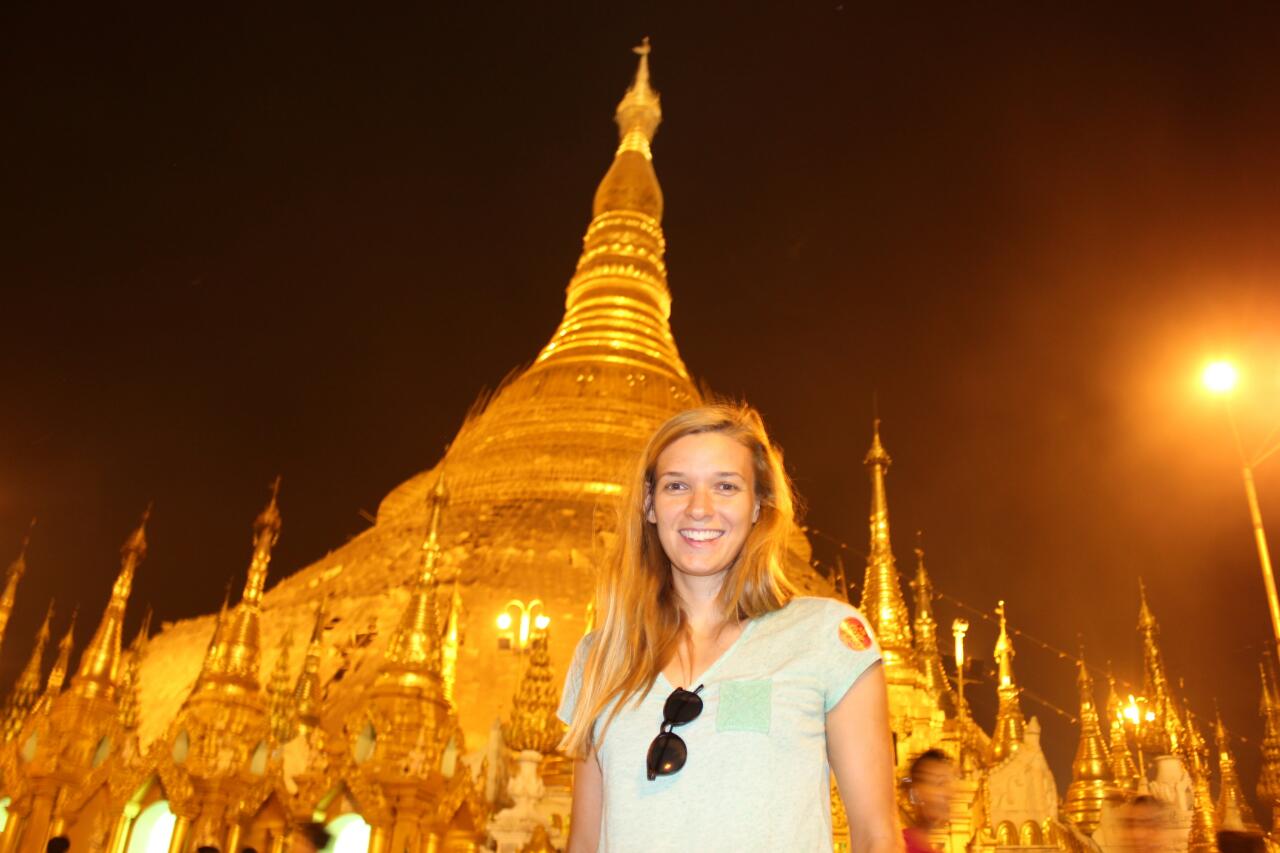 Some cool views at the Pagoda

Day 3 was nice day for just taking it easy. We got up late, went for a stroll then came back to the hotel to wait until the late afternoon to take the night bus to Bagan. We met the American/Burmese/English owner of the hotel and he was so incredibly helpful. He comes over once every few months to check up on things in the hotel. He told us some stories about how the city and country have changed in the last few years and it was really interesting to get his insight into the situation here. To see what he has seen it must be incredible to have watched the city change over the last 11 years that he has been coming to Yangon. He couldn’t do enough for us even coming down to the street to get us a taxi and he haggled the driver down from 10 dollars to just 7! We shared the cab with our new Korean friends so it worked out dirt cheap.

Next stop…..Bagan and all those temples!