So after my little European adventure I find myself back in Australia,  but this time on the east coast. I was a bit nervous about going back to Australia and this time being completely on my own, but I figured it’d be better than a winter in Berlin! I’d arranged to stay with my friend Georg, who I knew from our rugby club in Berlin and he even offered to pick me up from the airport – what a legend!

When I touched down it was a strange feeling to be back in Oz, to put in my Australian sim card, to scan in my visa and just some little things like that. Georg was waiting for me outside the terminal and it really felt so great to be met at the airport and to see a friendly face. When we got to his house he fired up the barbie straight away and got cooking like a true Australian! A few beers and burgers and then it was off to bed for me! I can’t emphasise enough how much of an amazing host Georg was, he even put together a racing bike for me so we could go on a tour round the city. It was really like a home away from home. 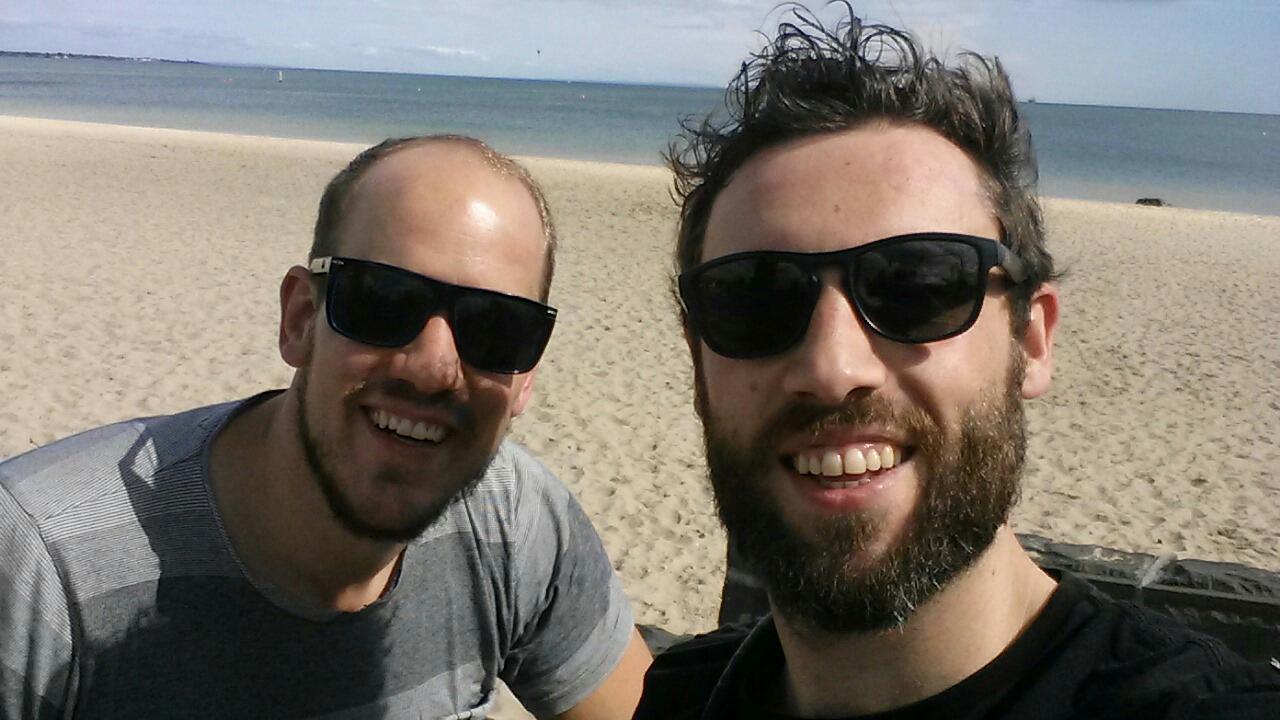 Myself and the "G-train" at the beach at St Kilda!

During the day everyone in the house would go off to work so I had loads of time to chill, watch TV, explore the city or go shopping. Georg and myself even managed to watch a bit of soccer in the stadium. We saw Melbourne City defeat the team from Wellington 3-0. In the evenings the guys would come back from their daily grinds at work and we’d have a chat and catch up on each others days or go out in the area for a beer or two. I managed to get out and about a fair bit and I really found Melbourne to be a lovely city. I visited some museums and did some tourist stuff, but a highlight was definitely the 40 km cycle round the city on a special bike path. It was a super ride full of great views and a real breeze on the racing bike. I even managed to visit St Kilda, which is basically a little seaside town in Melbourne.

Another big day for me was the day of the Melbourne cup, which as coincidence would have it fell on my birthday. That meant that everyone in Melbourne had a day off work and the town was definitely buzzing! We went to watch the race in a local pub in Brunswick, the suburb of Melbourne where I was staying and had a few beers and then a few more……and more etc! It turned out to be a great day and we even topped it off with a nice pint of Guinness in a lovely little bar called “the snug”. A grand day out indeed

Being in Australia isn’t like being in Asia, but I have to admit I’m beginning to understand the appeal of the country. There definitely is loads to see and do and you can enjoy a great standard of living here. If I was to compare Melbourne and Perth I’d definitely go for Melbourne. There is much more happening and the city seems more European, partly because of the mixed weather! The only massive downer is the time difference to Europe and the obvious distance from home. The time difference to Ireland is 11 hours and that takes a bit of getting used to!

Next up: Sydney and a reunion with an old mate from Uni!

2 thoughts on “Welcome back to Australia: hello Melbourne!”