We’d been told that Laos PDR didn’t mean Peoples Democratic Republic, but rather please don’t rush and Vang Vieng is really the place to experience that! Once only famous for tubing and excessive amounts of drugs, the city has had to adapt a little since tubing has been more or less shut down. Before 2012 you could come here, go wild and do almost anything, but since the government cut down on the tubing industry it’s not the same city. Now there are only 3 bars on the river where you stop of during tubing and they serve only beer and maybe some snacks. Along the river you can see the remnants of the past. Disused zip lines, old shacks that once we’re bars and even swings along the banks of the river.

We still wanted to try out tubing so we set off after breakfast and took our tuk tuk to the starting point. We were greeted with free shots at the starting point, a bar which for the day was celebrating Australia day. After a beer it was time to take on the river. I had already checked the river out in front of our bungalows and there was a surprising strong current in the small river. Tubing basically involves sitting in a large inflated tyre tube and gently floating down the river. That’s what we were looking forward to but after only a few mind you were already at the next bar and the next and the last. Then comes the marathon tubing session. From the last bar to the end of the tubing part of the river it takes over 90 min. The river only speeds up as it approaches a corner and otherwise it’s an extremely slow ride downstream. Sometimes you even have to do some serious paddling to move at all! Most of the time you’ll have some smart ass kayak people splashing you as they pass and that gets old very fast. The onslaught of primarily Korean tourists never lets up and the splashing never gets funny. If you see those kayaks coming your way, the best bet is to strike first or even try to tip them off their kayak. Get you equaliser in first 😉

Apart from tubing another favourite pastime of mine is eating baguettes. After developing a taste for them in LPB I’ve gotten really addicted to them, especially tuna filled baguettes. For 10000 Kip, roughly €1 they are hard to beat. The best way to eat a baguette is in one of the restaurants here whilst watching their 24/7 Friends marathon. Great cure for any homesickness. You can basically fill them with anything and to quench your thirst was it all down with a freshly made fruit shake. Yummy.

Otherwise our program here has been very low key. After arriving from LPB we stayed for one night in a fairly crappy “hotel” and met some Dutch guys, Marc and Bart with whom we’d done the monster bus journey from Sapa. They were fresh from tubing and had definitely enjoyed a few beers on the way. It was nice to see some friendly faces again and to catch up on their adventure. The guys gave us the great tip to check out the bungalows on the other side of the river and that was such a great piece of advice. The bungalows are very much like camping, but you have a toilet and shower and a big bed with mosquito net. It’s very basic but very cheap and really perfectly located. Close enough to the center to walk, but far enough away that you don’t hear any of the noise from the parties.

All in all quite a nice place to enjoy some cheap food, accommodation and great weather (30 degrees every day). One of my favourite places on my travels so far.

Even the cows enjoy relaxation here

Clean up crew, they love mosquitoes 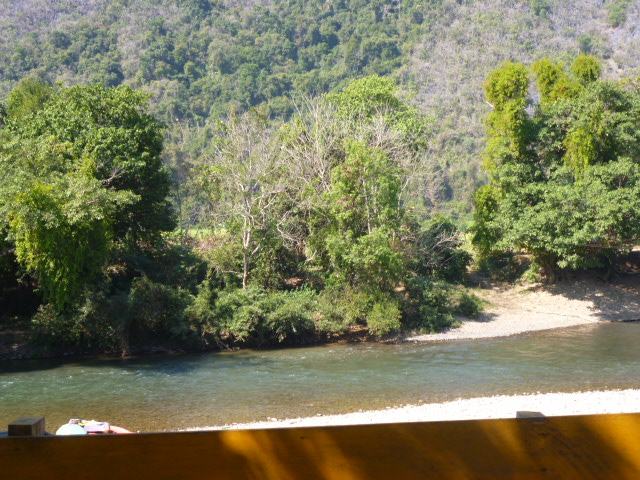 This was the starting point in the river, looked calm enough 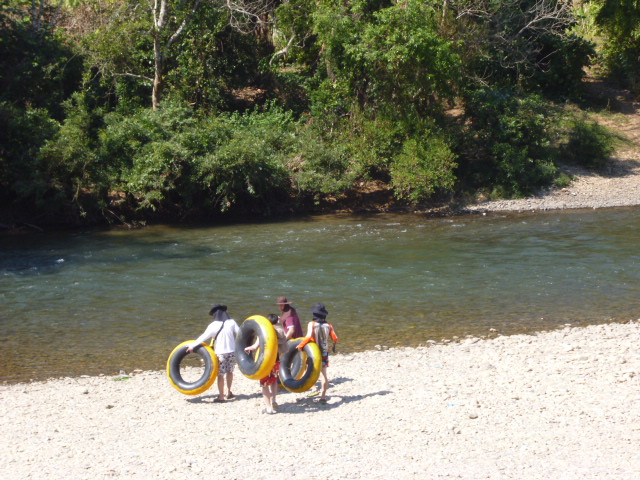 The Koreans were first on the water 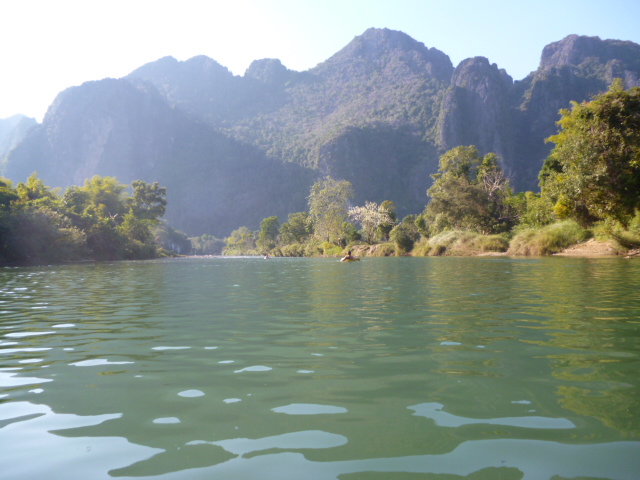 What an amazing view from the river. In the distance a few fellow tubing enthusiasts