A rather horrible 22 hr bus ride from Inle Lake brought our crazy crew to the next stop on out agenda: Mawlamyine – an old colonial town with amazing architecture and rich history. The name is pronounced nothing like it’s written and we heard varying pronunciations from the locals – something along the likes of mol-a-mean was probably close enough from us. 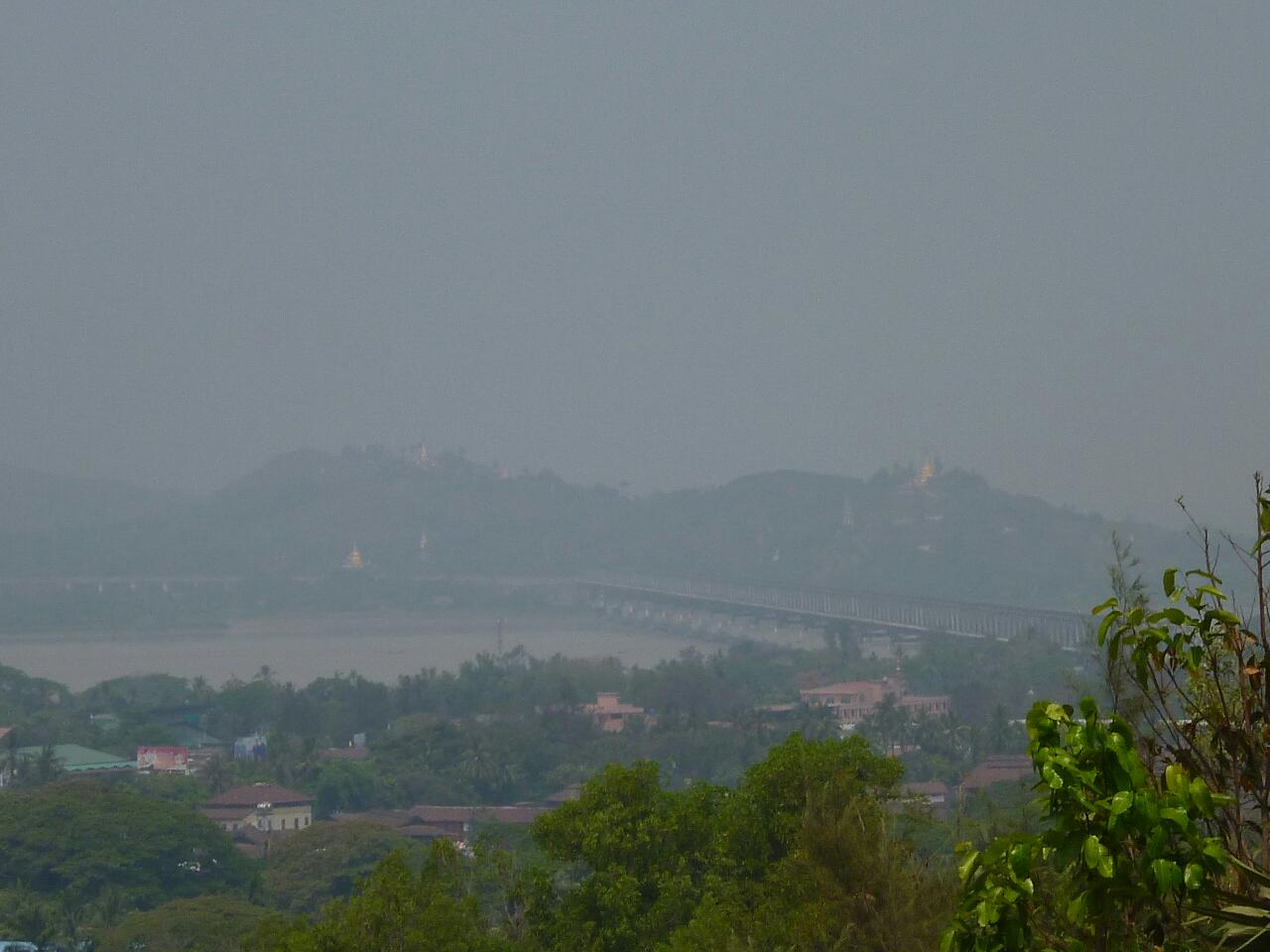 The bridge at a distance. Pretty amazing piece of engineering

I noticed straight away how humid the town was and the change in climate was really difficult to deal with after getting off the not so great bus ride. We’d decided to get the worst part of the travelling behind us in one go and our change from the night bus to the local bus in Yangon at 6 am was rough. We ended up in a seriously cramped mini bus where we 3 were the only westerners on board. That wasn’t so bad, but one thing that I’ll never get used to is the sound of practically everyone on the bus vomiting for 7 hours. On the night bus it was bad, but nothing compared to the never ending sound coming at you from all angles. It was kind of like an episode of family guy where Peter and Co all puke on each other. We had mothers with small children on their laps. First mom would puke, then the son, then both together, then the lady in front would get the baton passed on to her and she’d do her level best to do her country proud in the puking Olympics.

What I couldn’t quite fathom is why the people puked and then after our 30 min stop about halfway puked even more….oh wait, might it have anything to do with the fact that the people on the bus continued to eat??!! So I’ll have my break, get out and about and stretch the old legs, then I’ll have a big feed, get back on the bus and nibble on some peanuts. Basically they were puking and eating all at once, a rather nifty trick indeed. Waste disposal was tossing the bag out the window – good luck to any traffic coming the opposite direction. After 7 hours we were reversing into the parking spot at the bus station and one person still had to have one last hurl.

So we rolled into town around 3 pm and checked into one prison cell/prison disguised as a hotel (mosquitoes ruled the place and Marks room was converted from an old toilet….gooong…ah there’s Mark). Took a stroll along the spectacular promenade and as we had our British representative with us, had a spot of tea, or in this case tea/coffee and Swiss roll. We were quite soon afterwards regretting the Swiss roll decision as we stumbled upon what looked like a locals game of beach soccer. Both myself and Mark we eager to get stuck in and the lads were happy to have us. Let me tell you it’s difficult work running around in the sweltering heat and we didn’t last very long. We had a short water break and then kicked it about some more. The lads said we would divide the teams into Myanmar vs Vietnam, Vietnam going topless, shirts vs skins. We kind of thought it was some sort of slur on Vietnam but later found out that half the lads were actually from Vietnam and were only here working on the ships dredging the river. We only found out this info later when we by chance stumbled on the lads at the night market, where they insisted on paying for all our food and beer. It turned out to be one hell of a session and I can’t remember the rest……

Let’s just say the next day was a tough one. Mark was up for wandering around and exploring the city and climbing to the top of the hill to get a nice view of the city and surrounding area. It was cooking hot and I was sweating buckets. In the evening time we were once again drawn to the night market. It’s hard to beat it for quality and price. BBQ all the way or fried noodles galore! 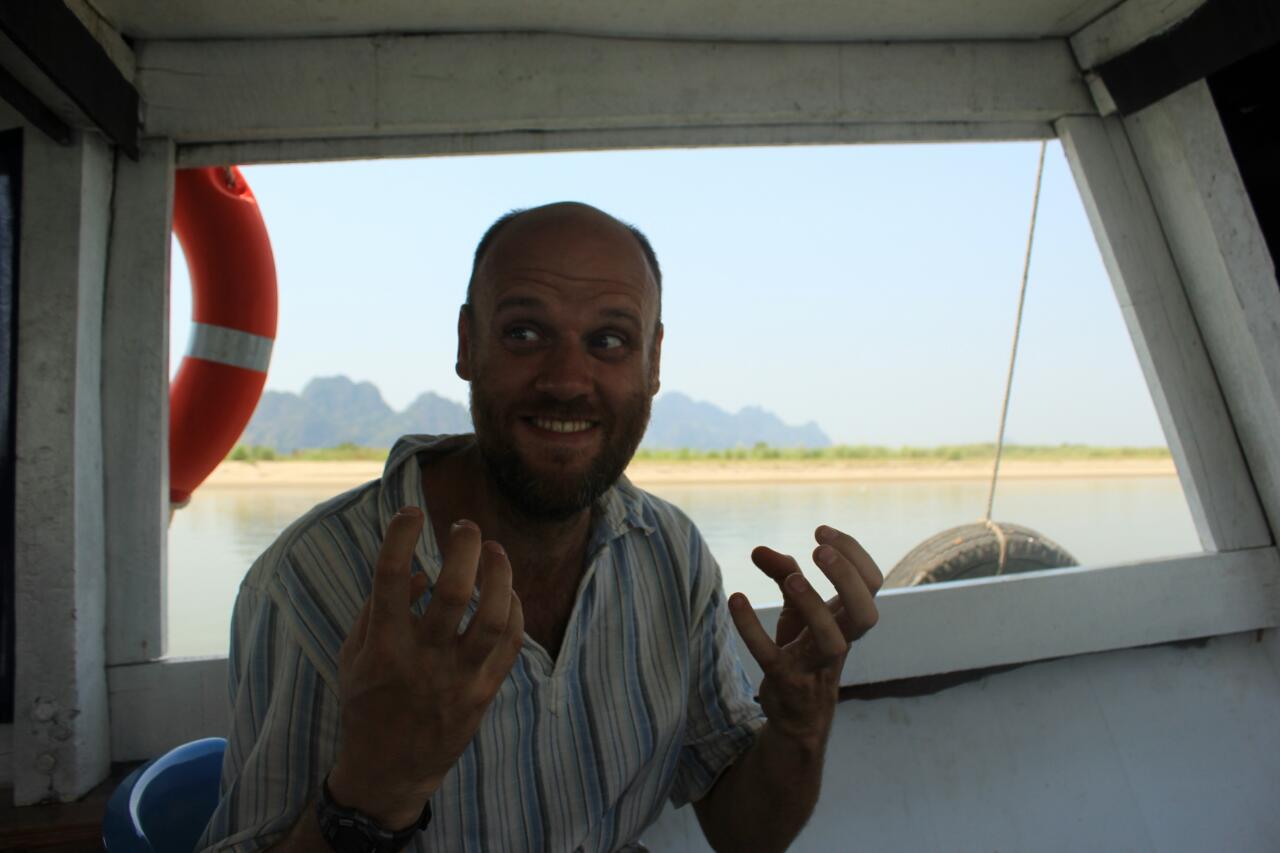 Mark the legend doing his impression of a lion 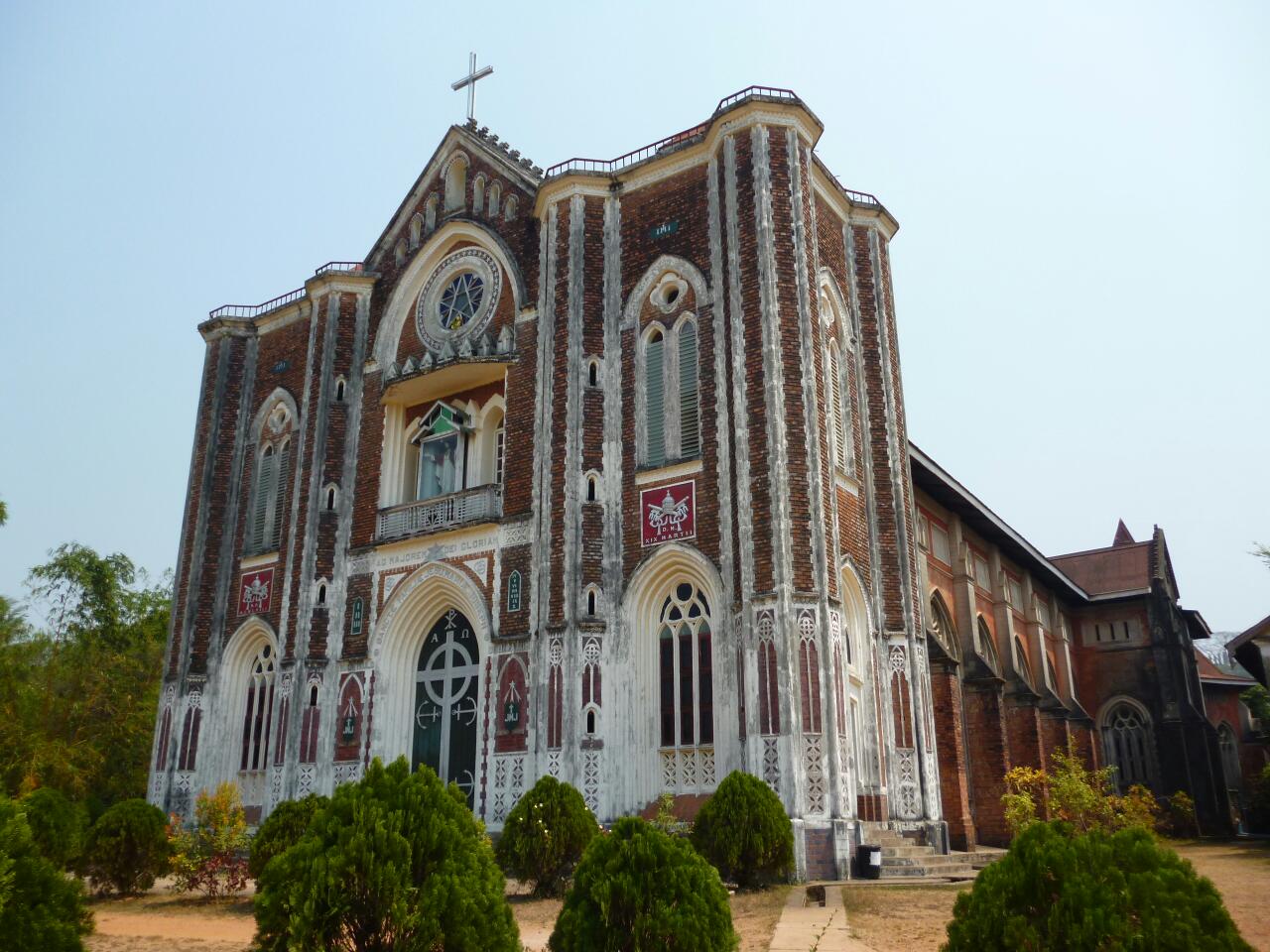 A cathedral built by the colonists

The view of Mawlamyine from above

We’d had a quick chat with Mark about what would come next and he’d heard from a friend about an amazing tour you could do in Hpa-An (the “H” is silent). You can go by bus or by boat and we were dead set on the boat idea. 4 hours cruising up the river and taking in the amazing views of the limestone outcrops and friendly people waving from the riverbank. We arrived at the pier and did the usual accommodation dance, going from place to place trying to get the best deal and eventually found a super family run business offering clean and comfortable rooms for $20. When we got settled we ate some of the most intensely spicy food ever and spent the evening sweating it out! We planned out the next day and sorted out the tour Mark had heard about. We paid a tiny bit extra and got ourselves a taxi with air conditioning, which was a masterstroke. 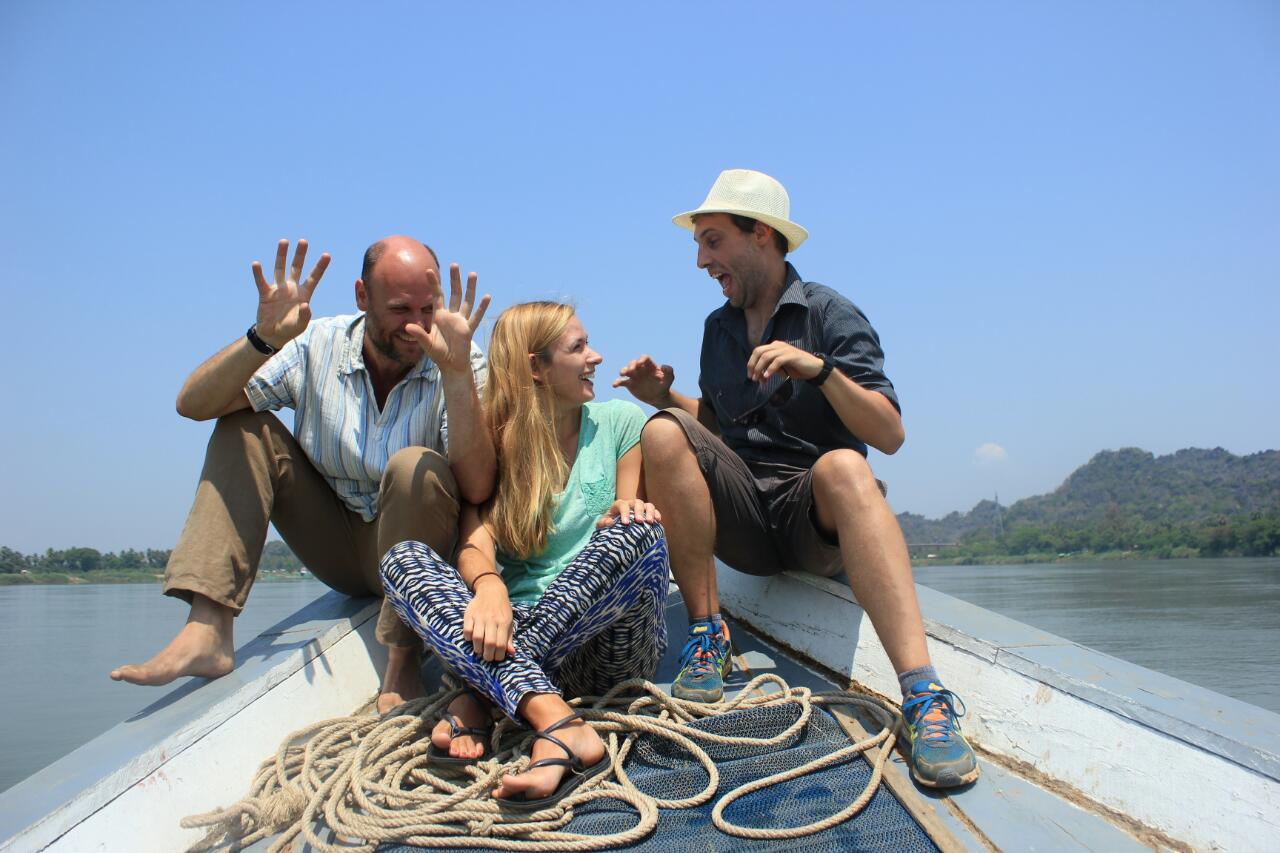 Our slow cruise to Hpa-An

Some of the amazing sights on out day out around Hpa-An: 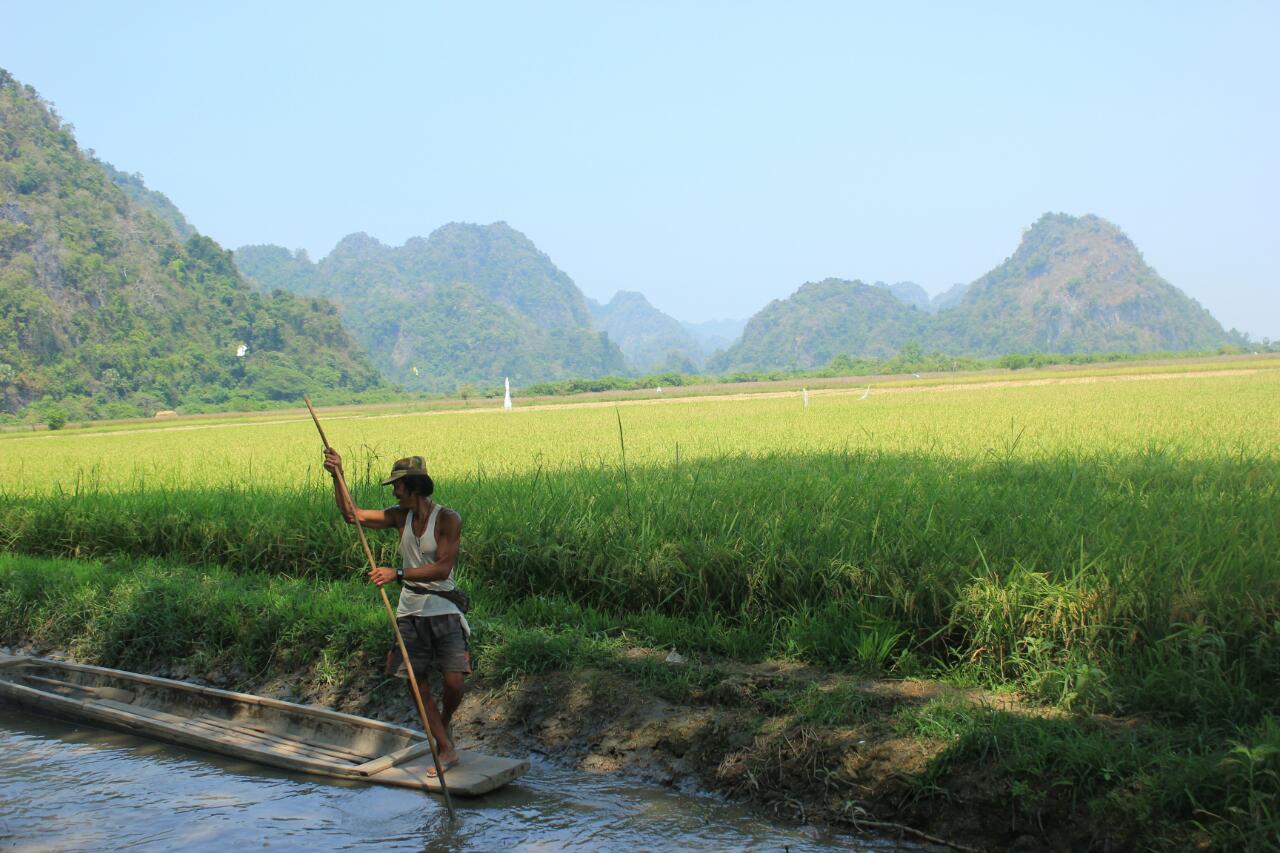 Our boat ride through the rice fields 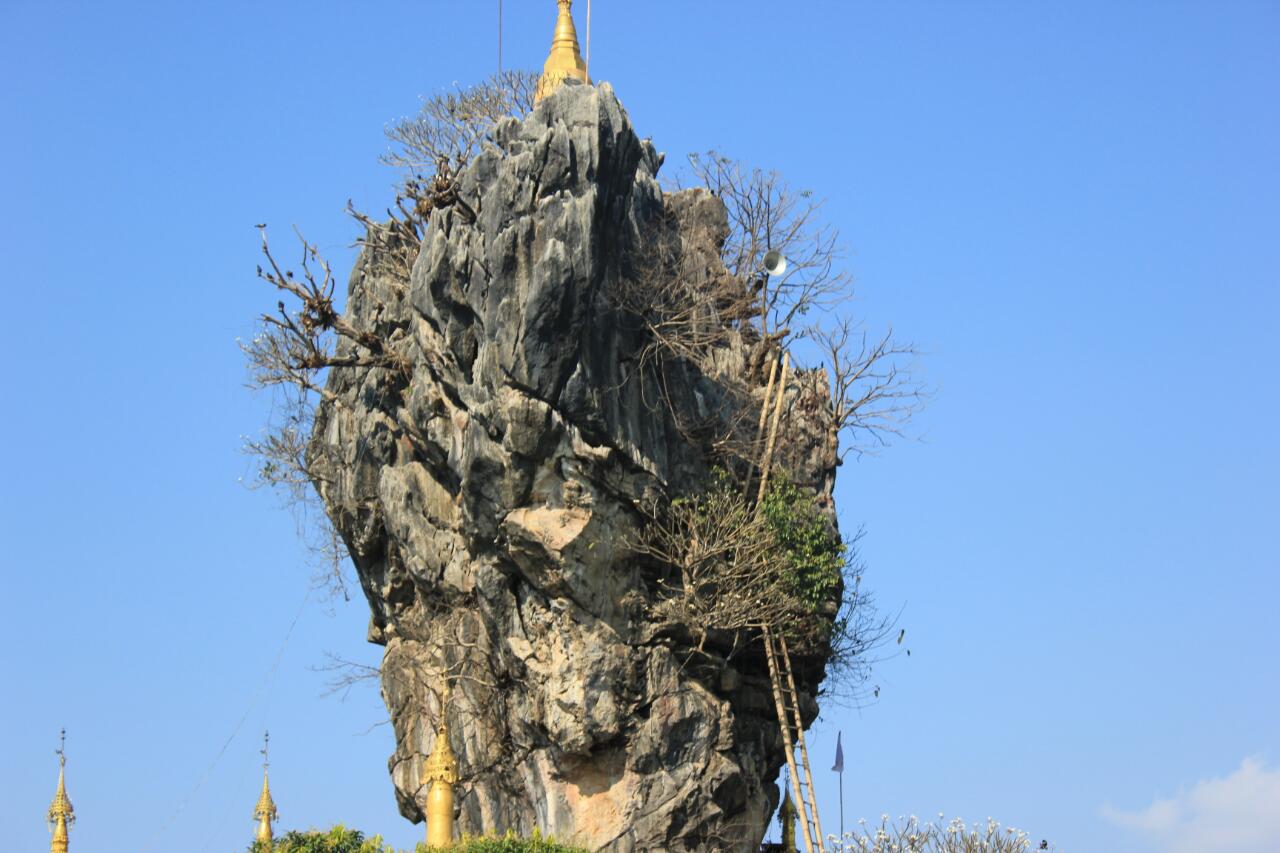 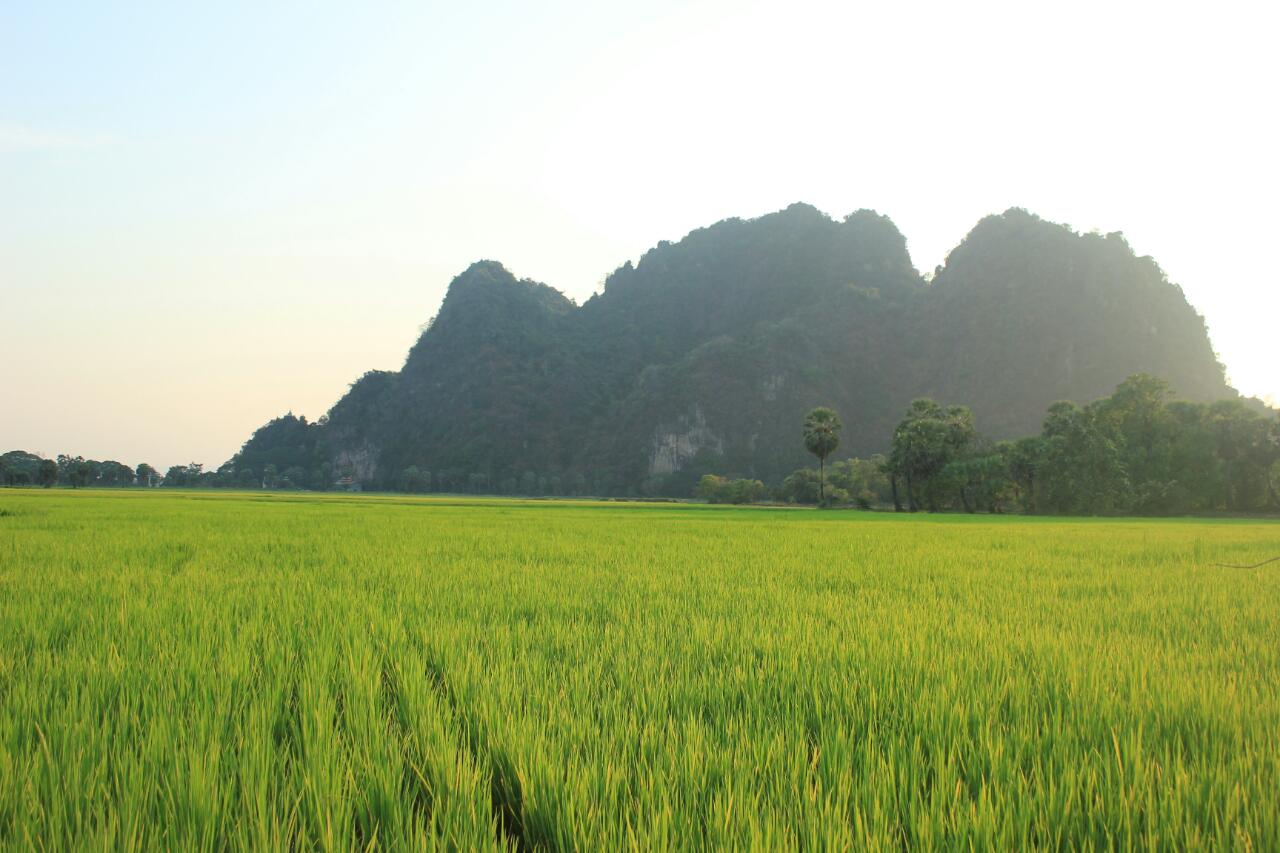 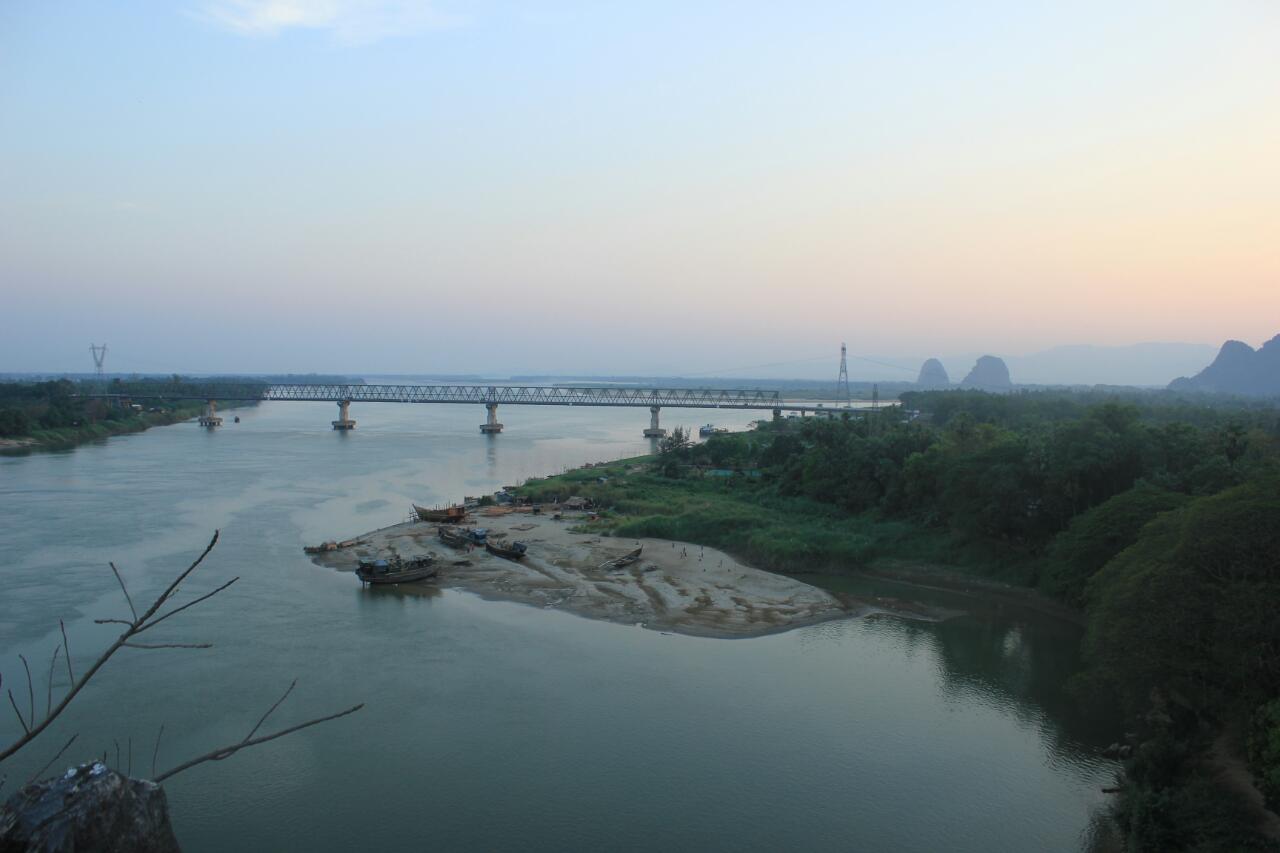 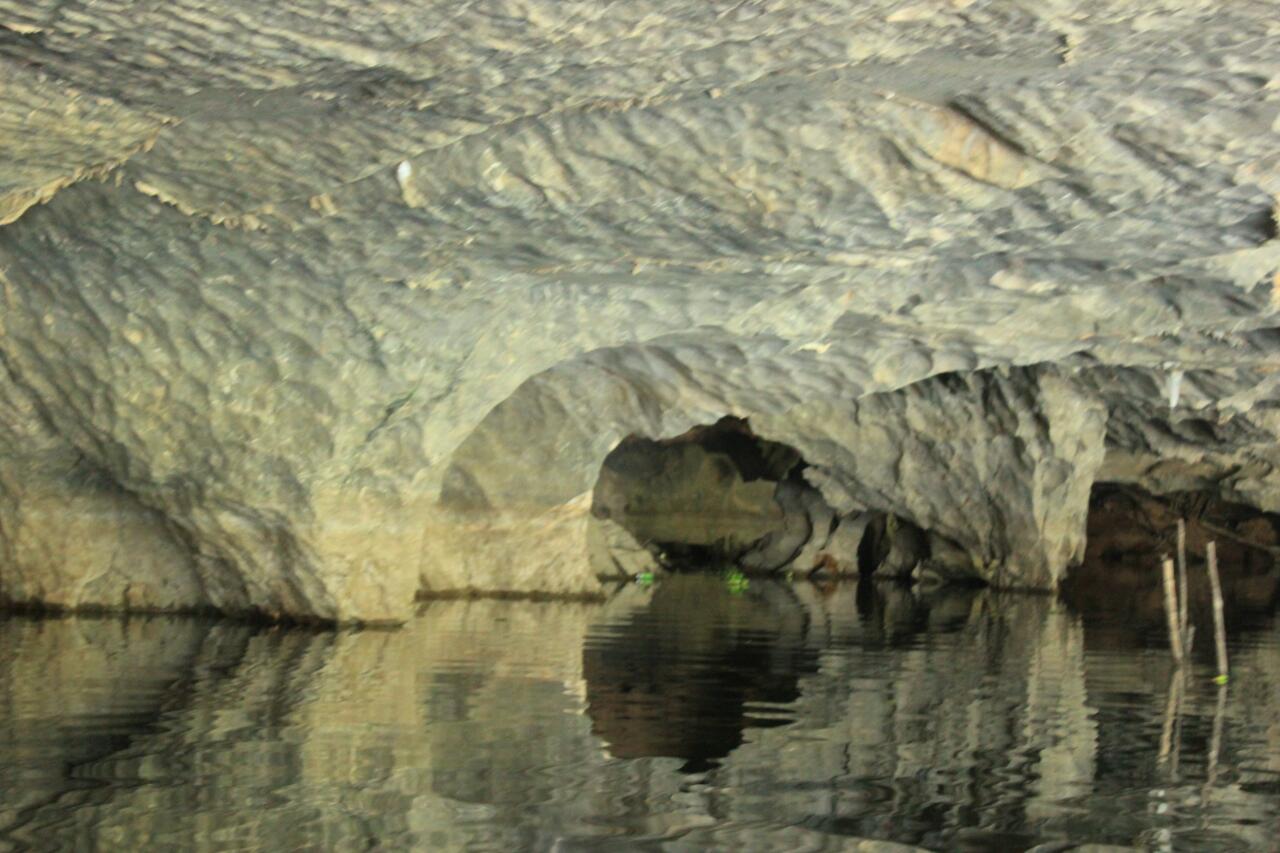 We travelled through these caves in a tiny wooden boat 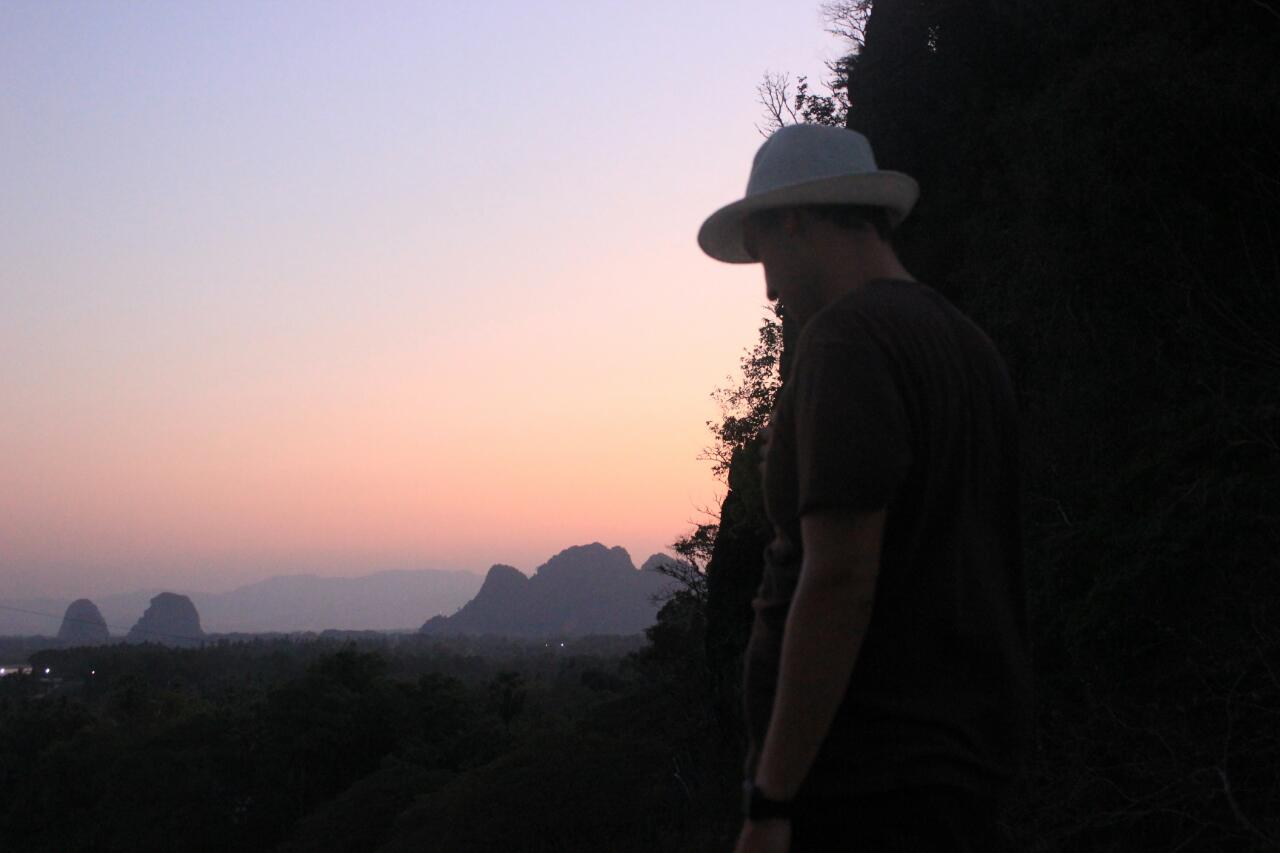 Waiting for the bats to leave the "batcave" 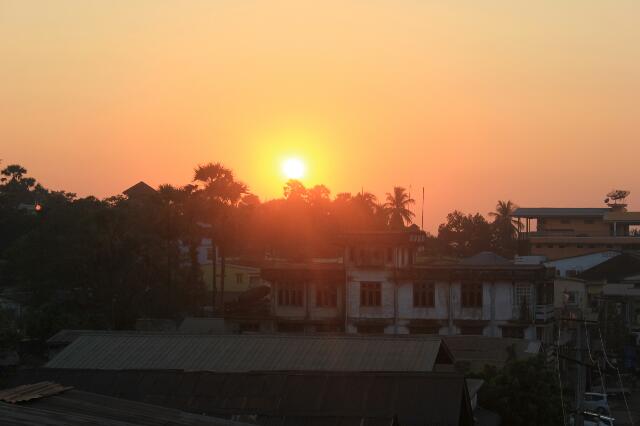 The tour day got off to an early start and it was inthe end a super long day from 9 am to 7 pm. We visited some amazing caves in the limestone mountains, saw about a million bats sleeping upside down and making and unbelievable noise (and stink), saw some beautiful temples in the strangest of places and some stunning rice fields. A real highlight of the day was seeing about 7 million bats coming out to hunt at dusk. That was just legendary to take in. By the time we got back to the hotel we were properly worn out and ready for a good sleep. We decided to spend the next day in the town doing absolutely nothing and then took the bus back to Yangon the following morning just in time to watch the rugby in the evening. Wales defended stoutly and kept Ireland out in the end. We had to say our goodbyes to Mark, who was heading straight to the airport to go meet his girlfriend in Nepal. It was the end of a beautiful adventure with Gongman and both myself and Steffi had really enjoyed his company. Maybe we’ll bump into him somewhere in Europe again.

After the rugby on Saturday night I was fairly tired on Sunday so we just strolled around the city for a bit and took it handy. Monday was the beginning of my massive 4 airport trip to Taiwan!! 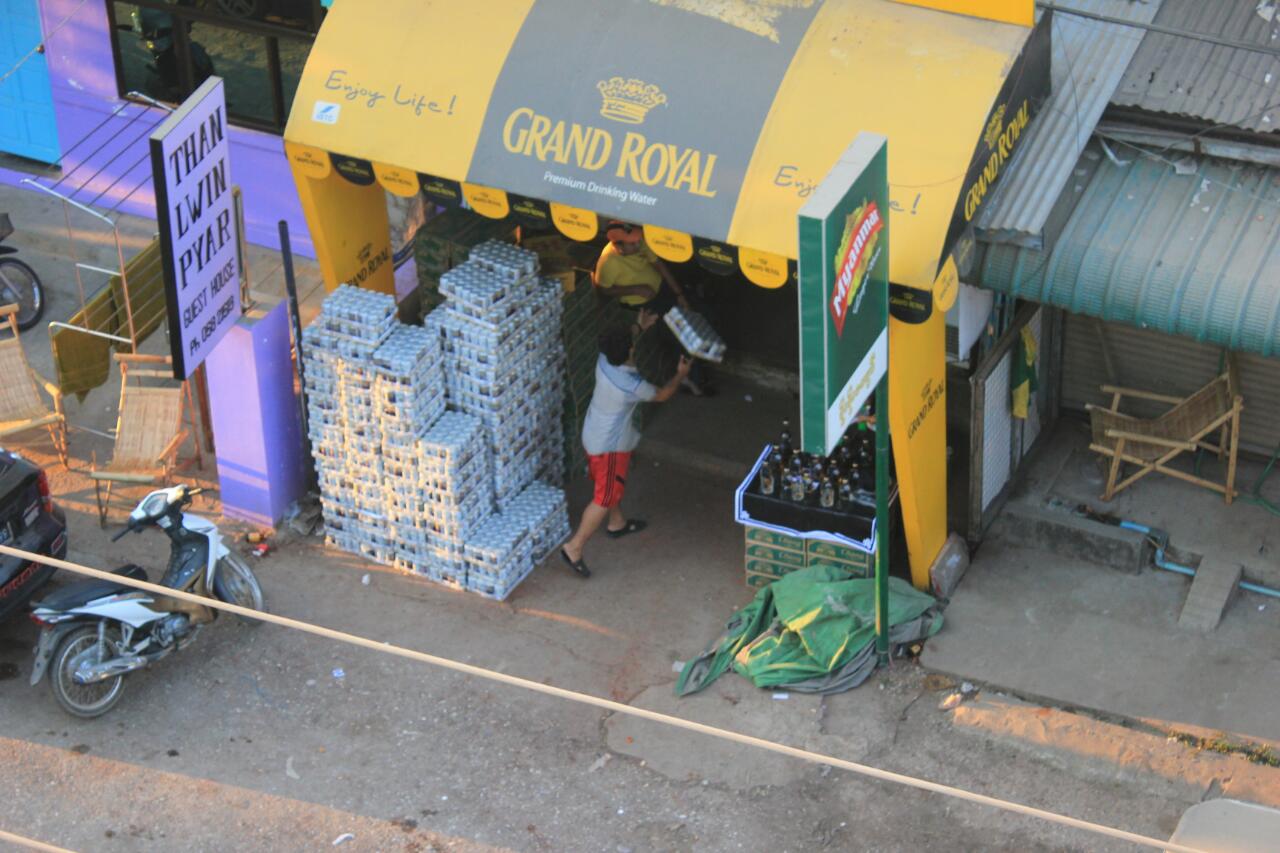