It may seem a bit silly to hear but there are cold places in Vietnam. Sapa is one of these places. If you’ve ever seem pictures of terraced rice fields then it’s quite possible that the pictures were taken in the Sapa area. The views are extraordinary and well worth the trip. When we arrived at 6 am from Hanoi my first thoughts were not of the views but rather how unbelievably cold it was. After sleeping rather cozily in the bus for a few hours the drop in temperature was a real shock especially as I do not have any winter clothes in my rucksack at all.

We had so scramble in the darkness an the just above freezing temperatures for a jacket and then keep our eyes open for a taxi. We were basically attacked by hoards of H’mong women looking to take us trekking and to visit their village. I personally wasn’t in the mood for being accosted so I politely told to jog on! A short taxi ride later brought us to our home for the night. The inside of the hostel was basically as cold as the outside and our room wasn’t going  to be ready for a few more hours. We parked ourselves in the bar/restaurant area and tried to get the fire going. A hot tea and a yummy breakfast later the situation didn’t look as bad. We had by this stage looked out the window and briefly saw some amazing views but the fog had both lifted and returned in the space of maybe two hours. Once in the room we basically bunkered ourselves under the blankets and cracked on the heated blanket, which is the only heating in the room.

We really hardly left the room as it was the only was of staying halfway warm at all. The only time we spent outside was to grab some food and to book a trekking tour for the next day. That is really why the most people come to this area. Of course the H’mong people are also an attraction too and the women are hard to miss on the streets with their special dresses and clothing. What was kind of annoying was the fact that the women would follow when you walk in the streets and say “shopping” or “where you from”. Of all the persistent sales people I’ve seen in Vietnam, these women were number one. One little girl even followed Steffi for quite a but and just kept mumbling words at her and showing her bracelets. Quite strange indeed.

As we’d had mixed feelings about our involvement in overly touristy activities we decided to pay a little more money and go on a trekking trip with a H’mong woman. We started out at 9.30 am and went the exact opposite way to the path that most tourists go on. We’d done our best to wrap up warm and had invested in gloves, hats and a jacket for Steffi. All of this setting us back the bank-breaking sum of circa €15. Our guide, Giang (I hope this is how you spell her name) was really motivated and excited to go with us and she really wanted to tell us loads about her beliefs and traditions, even to the point where it became a tad annoying because although her English was very good sometimes her pronunciation made it difficult to follow her. A lot of what she said kind of reminded me of Native American beliefs etc. She spoke about the shaman and sacrifices and also about medicinal healing techniques.

Our trail took us up a very steep mountain, which was quite tough going. We were both glad that we had rented Wellington boots as it was super mucky and extremely slippy. Along the way some people passed us on their way to market. They were travelling with heavy packs full of goods they wanted to sell at the market in Sapa such as wood, vegetables, and livestock amongst others. This is really a different time here and a different way of living. It’s obviously a lot more rural and a lot simpler. If you want to buy meat or veg you go to the market, there aren’t really any supermarkets as such. You also need to be able to haggle to get the best price. Our trail took us to the top of the mountain where there was somewhat a better view but still a covering of fog obstructed any photo opportunities. We passed through the little mountain villages and dwellings and came face to face with loads of animals on the farm; chickens, pigs, cows, buffalo, ducks and geese. They were all wandering around freely.

We had a lunch of fried rice and spring rolls in the little mountain restaurant and were thankful to have something warm in our tummies. Once you sat around for any amount of time you straight away noticed how cold it was. That was part of the reason why we wanted to get going again. On the way down the mountain we saw loads of pigs and piglets just roaming around, they were soo cute. We got to see some beautiful views and some great scenery. We stopped along the way just for a short rest and it was so amazing to watch the world go by for a distance and really soak up the amazing surroundings.

When we got down to the valley we learned why you shouldn’t step in the rice fields, the muck is so soft that you sink really deep! We crossed over the bridge and made our way to the homestay where we would be spending the night. It was a super cozy home which was basically a large barn with beds and the lady of the house an a lovely little fire going for us to warm up to. We helped prepared so fried spring rolls and the rest of the dinner and enjoyed a superb feed. We even got to try some “happy water”, basically a very strong rice wine. Then off to bed. Thankfully the beds had big heavy, warm blankets.

The next day was much of the same with regards trekking, but we got to see a beautiful bamboo forest and a massive waterfall. We also saw a few tourists but thankfully only a few and we basically had the whole trail yo ourselves. Our guide was really understanding and let us decide the tempo and direction we took most of the time e, which was really cool. It was really important for us to avoid main roads and clumps of tourists and we managed that easily. Taking the private tout may have been a but more money but it was totally worth it to experience something really special and to be able to gain some local knowledge straight from the people themselves.

We had a jeep waiting for us to take us back to the town of Sapa where our night bus was leaving at 6 pm…….and so began the 26 hour journey to Laos…..what a bumpy ride

(If you happen to visit SE Asia don’t expect good roads….especially in Laos) 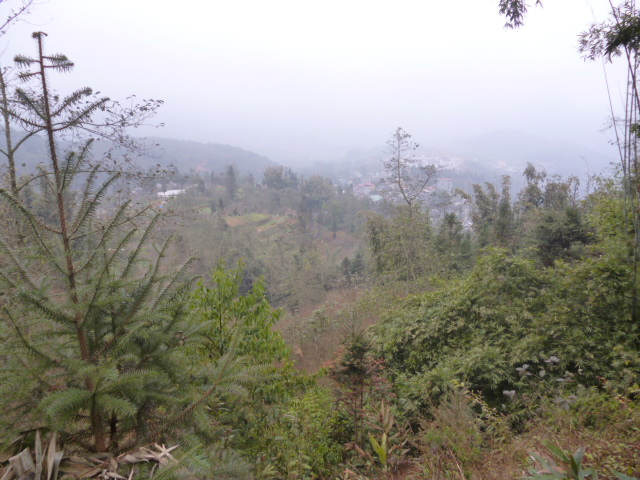 High in the mountains this was the best visibility possible at the time. The climate changes quite rapidly here 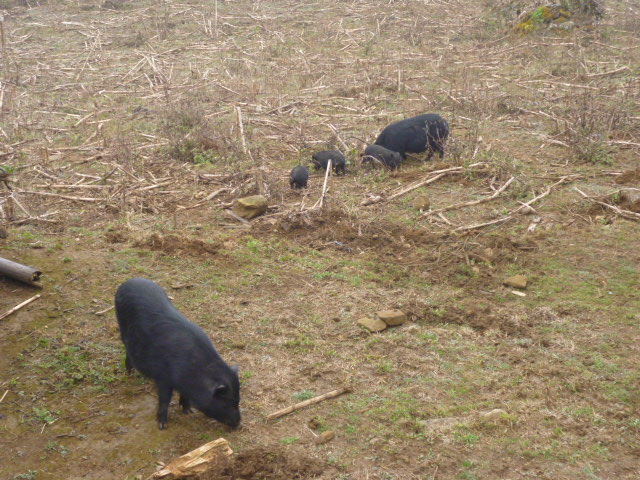 All the clothes we could wear! Steffi with her bargin night market jacket. It probably wouldn't make it on a cat walk in Milan though 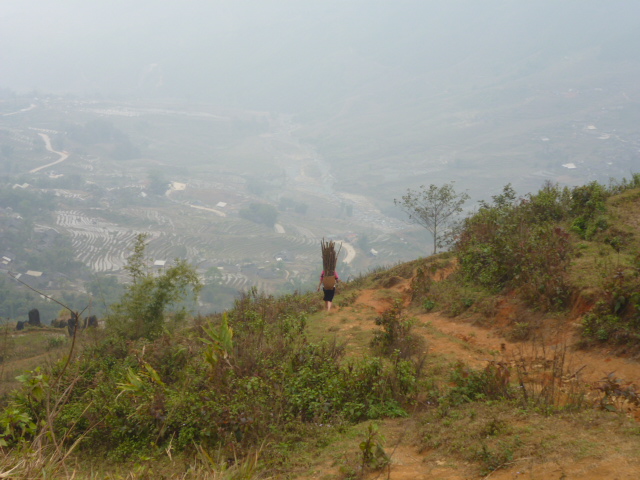 Further in the valley you could see a bit more. Already the first signs of the rice terraces. This lady had to take wood down from the mountain top, heavy work 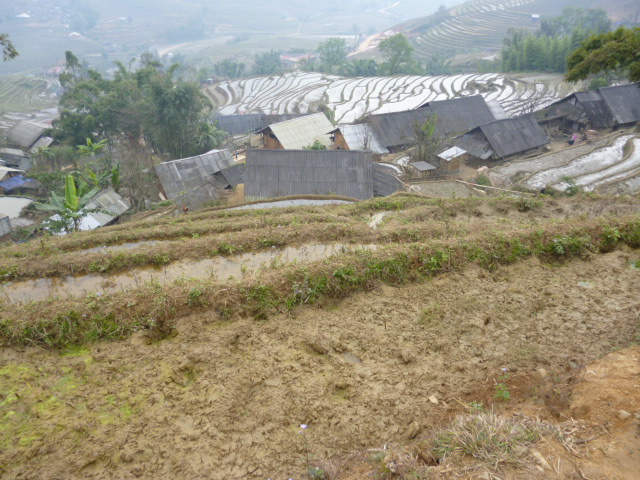 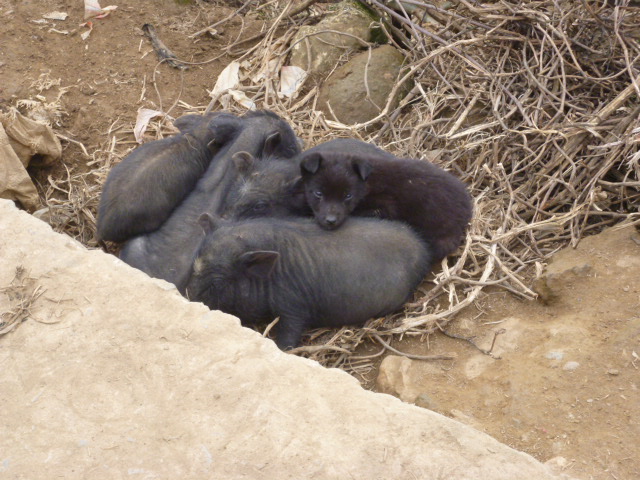 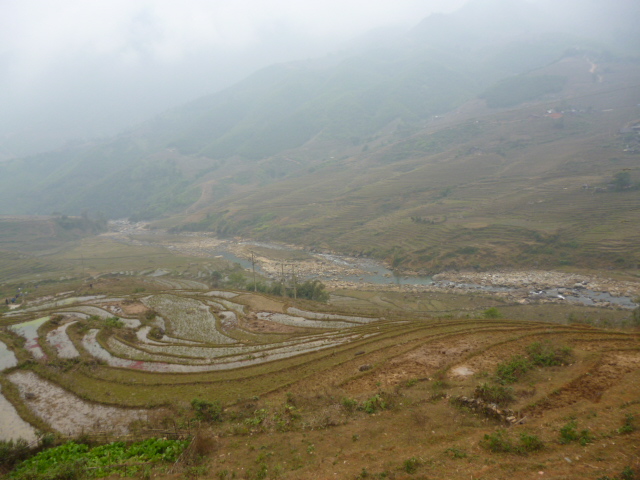 Down into the valley. Our homestay was on the other side of the river 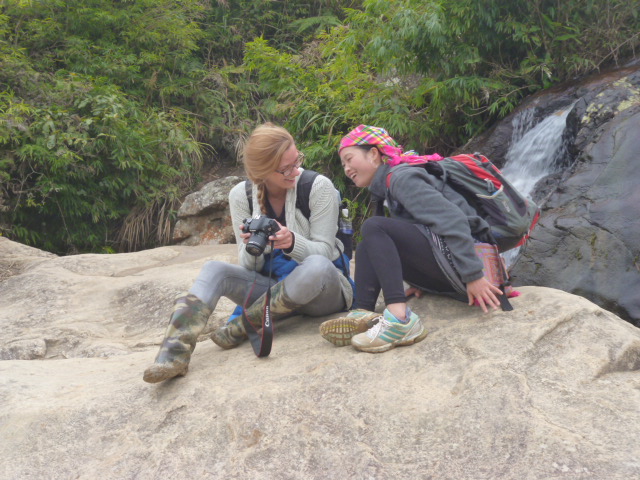 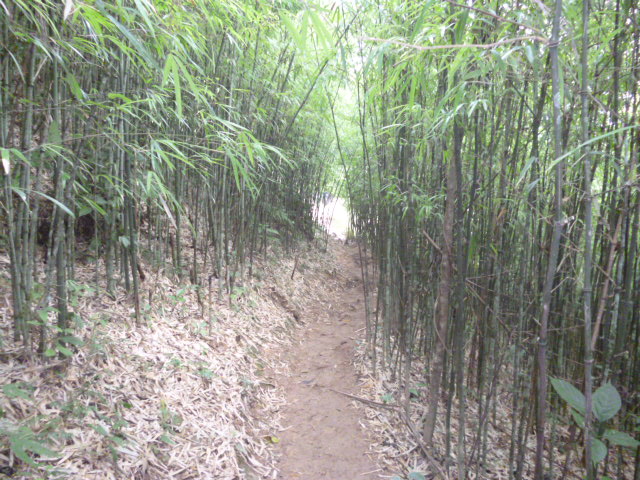 An amazing walk through the bamboo forest on day 2 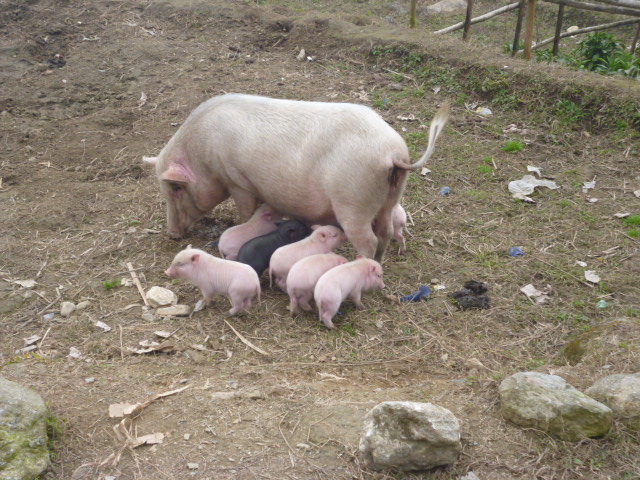 We even saw a few white pigs, but only a few in comparison to the black ones 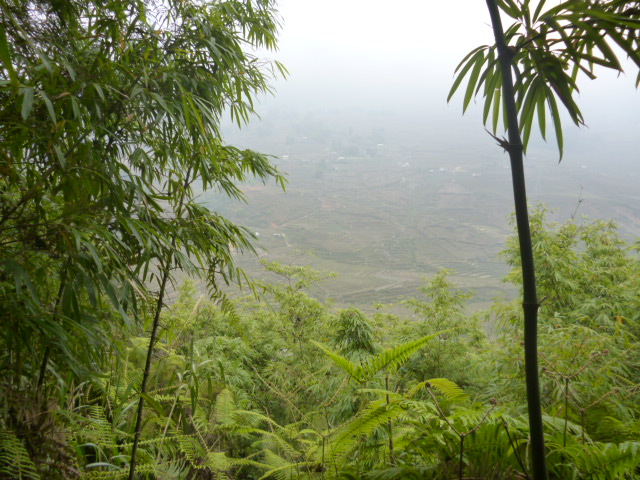