After our travel agent visit in Bangkok we’d booked ourselves a little trip to Chang Mai on the express train. It was a really nice train ride and the beds were big enough to completely stretch out and get a decent nights sleep. The total journey time was about 14 hours but we slept for most of that so it passed by rather quickly. Across from our beds were two really nice guys from Cornwall, who had spent some time on the islands in southern Thailand and also some months working in New Zealand, so it was really nice to listen to their stories and adventures. One of the guys had even completely hitch hiked his was around New Zealand, something I would be a bit scared of!

Chang Mai had reached our ears from many a tourist, but actually we weren’t that impressed. Maybe it was because we’d already seen so many temples or Wats along the way in other countries. We did enjoy just taking it easy and not feeling obliged to really do anything at all and we cancelled the pre-arranged trek and elephant visit after we’d heard about how they were treated and kept. You have to be careful which tour you book and sadly our scam tourist agents had us on the worst one. The elephants are owned by the people and under Thai law, the owners can basically do what they want with the elephants. Some are beaten and chained up in tiny little houses at night etc. Doesn’t sound so great. Just a point of note there are other tours that you can book where the elephants and well cared for.

I was happy to be in Chang Mai as it gave me the opportunity to watch the Ireland vs France rugby match at the local Irish pub. It meant staying up to 2 am to watch the game to the end but I was more than happy to do so. The Irish pub did surprising good food and drinks so we treated ourselves to some nice grub. I even met a nice guy from Ireland who had been living there for 7 years and we had a good chat about life in Thailand.

A highlight of Chang Mai was the food and the cooking class we did one afternoon. We had a great time and cooked up a storm. It was soo easy once you had the proper ingredients and I’ll definitely try Thai cooking when I return to Europe. Have a look at our work: 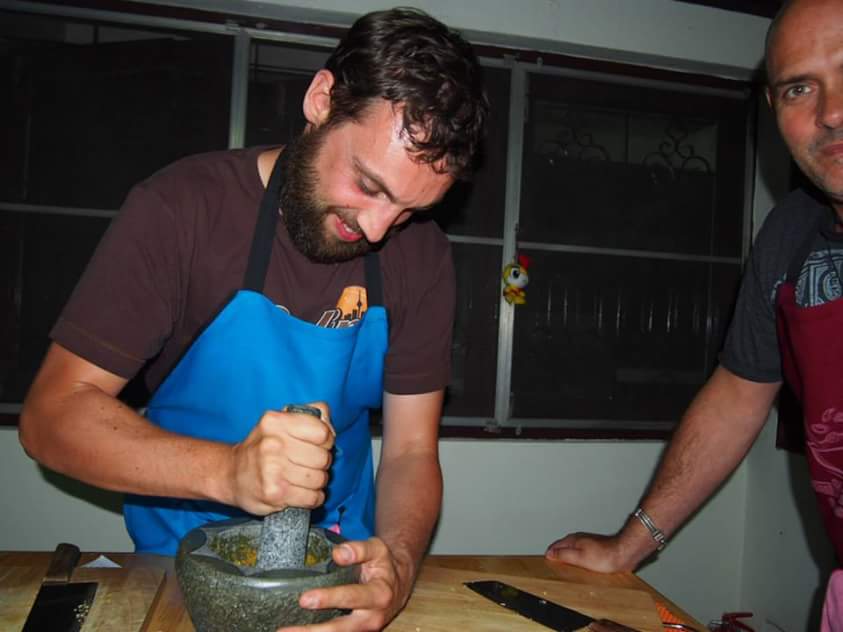 Grinding out the curry paste 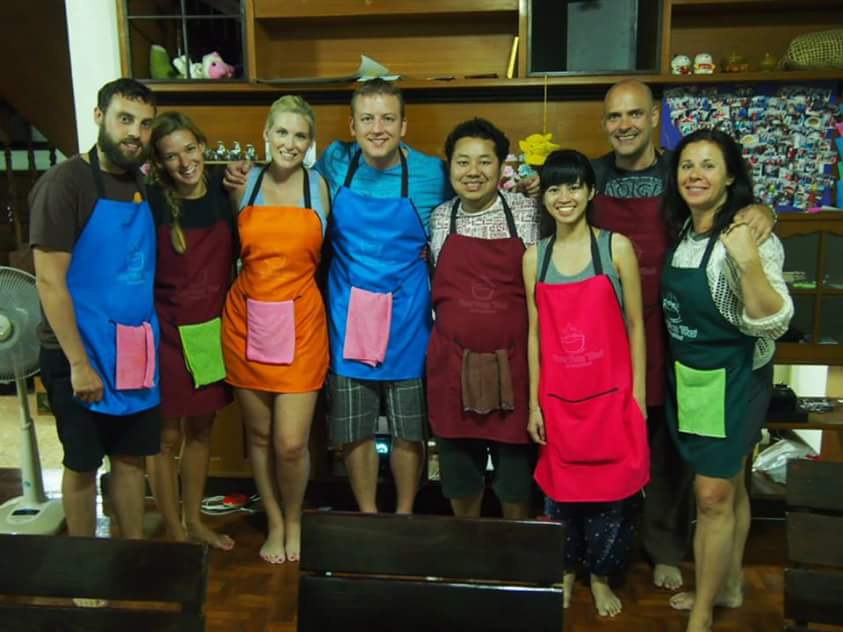 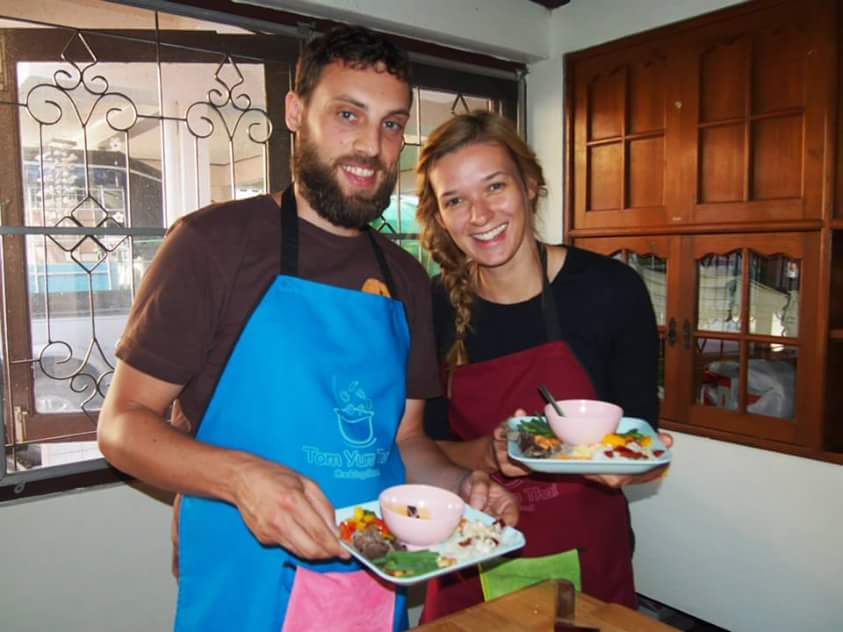 Cooked up a storm

We also by chance found the most amazing street food stall in the middle of nowhere on the edge of the city. Pork satee and sticky rice….delicious. The woman was so super friendly and remembered us when we came back 2 days later. 1 kg cooked sticky rice for €0.50!!! This was a little safe haven for us food fanatics and we duly gorged on the delicious pork BBQ. It’s sometimes the smallest of things that can get you back on track and lift your spirits 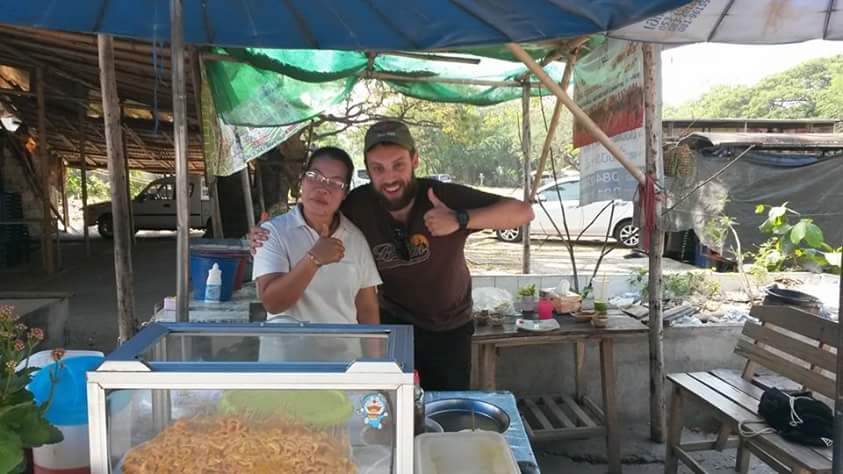 Best street food ever. Pork with satee sauce. The owner of the stall was soo amazingly friendly

We managed to meet up with an Australian friend who is living in Saigon and took the opportunity of Vietnamese new year to travel around a bit. A few beers and a nice catch up put us in a good mood again and it was nice to chat about what had happened since we last met in Saigon at Christmas.

We took the windiest road in the world to reach our next destination; the mountain town of Pai. I have to say that we both really regretted not being able to stay here longer as it’s such a nice little place. Everyone and everything is so laid back and the food was darn good too. If you’re a vegetarian then you’ll love Pai. We ate about 3 or 4 times at a place called Earth Tone and it was super yummy and superb healthy. We spent a full day at the outdoor pool called fluid and relaxed loads at our bungalow and chilled in the hammocks. We had to go back to Bangkok to take the flight to Yangon, but otherwise we definitely would have stayed a few more days in Pai. Just what the doctor ordered after Bangkok and Chang Mai. 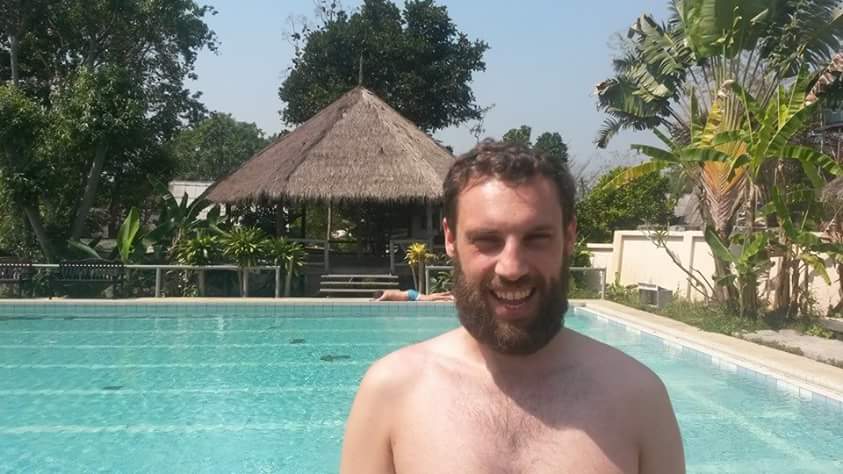 A super lazy day by the pool

We took the windy road down the mountain to Chang Mai and then took a connecting night bus to Bangkok. The ride was pretty horrendous as my seat barely reclined and my neck pillow broke/sprung a leak. The Polish couple in front of us insisted on leaving the light on all night and were basically on the brink of doing the deed, which kind of just added to the uncomfortable journey.

All in all the 2 weeks in Thailand were not soooo amazing, but we’ll be back later on the trip so maybe we can make some new memories. On to Myanmar!!!