Although Melbourne may be the centre of AFL (Aussie Rules) there are so many other sports to be found here, including rugby league, rugby union, soccer and tennis to name but a few! Now that the respective sporting seasons for the main sports have kicked off, you could almost visit a game every evening or afternoon! As I’m personally not a massive Aussie Rules fan I’ve stayed away from it here so far, but I can imagine going to a game just to get the atmosphere at the MCG (Melbourne Cricket Ground – home to more than just cricket and with a 100,000 capacity)

I’d say that during the summer here you could almost go to a different event every day and especially at the weekend. From art events, to exhibition to steer festivals, Melbourne has it all. I worked at loads of events including the Moomba festival, St Kilda festival and multiple other non sporting events. I found it a great way to sample the atmosphere at these various events and also to meet new people and get to really know who lives in Melbourne. It’s such a multi-kukti sort of city and even more international than Berlin. Somehow it all works together and it’s pretty cool.

I have managed to visit AAMI Park to see the Melbourne Storm (League) & Melbourne Rebels (Union) teams play. What you’ll notice straight away is the obvious lack of support for these teams. At the games I’ve visited there has never been more than 12,000 supporters, which obviously doesn’t lend to an amazing atmosphere. The quality of the rugby was really good but people are just not so die hard like in Europe due to the lack of history or heritage behind the Rebels franchise for example. They first entered the super rugby competition in 2011 and therefore for obvious reasons don’t have a massive following. If you compare this to an aussie rules game between Richmond and Collingwood you could have anywhere upwards of 80,000 watching these two teams, which are just two suburbs of Melbourne. Bearing in mind most of the AFL is made up of predominantly Melbourne based teams, you get the picture why all other sports are pushed to the edges! 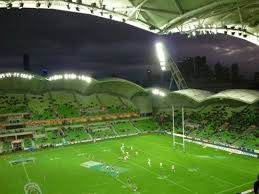 So many people, (including myself) expect rugby to be massive down under, but the only area where it probably has the biggest following is Queensland and even then it’s not to be mentioned in the same breath as AFL. I remember going to a rugby game in the RDS in Dublin many years ago and it was just a league game between Leinster and Glasgow and there were around 17,000 fans there.

Whatever the sporting occasion it’s still amazing to go along and get cheap tickets and just get in the spirit and have a few mid strength beers 😉 Melbourne just had the Grand Prix in town and it just floods the city with tourists and is just great for business. The Australian open is here and that’s one of the major tournaments on the tennis calender. It’s a super occasion and so cheap and easy to visit! Even if you’re not a massive tennis fan you can have a great summer’s day out. Now with it being autumn here and winter approaching, the focus shifts to the team sports again. For me that means a focus on the rugby season with Melbourne Uni rugby club. Hopefully all that preseason training will pay off 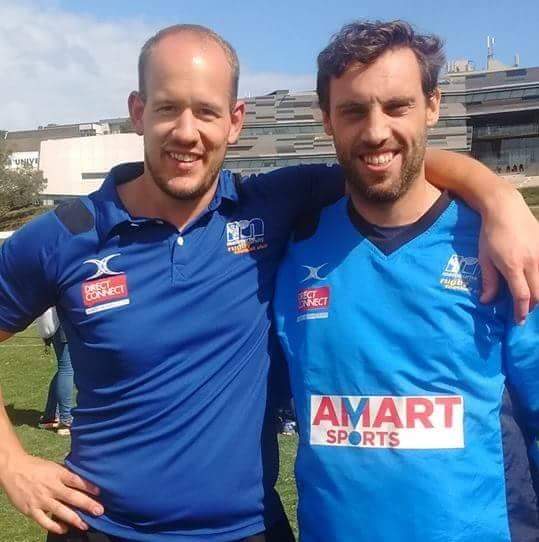 Old mate and me ready to rumble at rugby

*Editor’s note: If I had any advice for people coming to Australia or Melbourne in particular it would be to get a job for an events company of some sort of agency involved with events here and during the summer you’ll be snowed under with work and you can really make a pretty penny as long as you don’t mind working long hours and basically every day!!