So I won’t go into detail about our bus ride from Sapa, but I’ll say this, we were in need of some serious relaxation after it! Luang Prabang, or LPB for short is definitely a great place to recover and recharge the battery. The city itself is fairly small and easy to navigate. Everything is in walking distance and you can even rent bikes if you want to explore a bit outside of the city. Temples or “Vats ” are all over the city and Buddhist monks are constantly walking to and fro. The change in climate was obviously very noticeable straight away as most people were wearing shorts and t-shirts. This was a welcome change from Sapa.

So I’ve arrived in Laos and my arrival brings mixed feelings with it. On one hand I get to explore a new country but on the other hand it’s spells the end of my Vietnam adventure. Vietnam was so amazing and it is a country I would already dearly love to return to in the not too distant future. There were so many great memories, people and experiences there. Now it’s time to give Laos a chance and see what the vibe is like here.

Even as we made the border crossing in the bus you could straight away see the difference in landscape. There were jungles and mountains as far as the eye could see and not just little mountains but massive mountain ranges everywhere. The houses and living standard definitely changed too with a lot of people living an incredibly basic lifestyle. Most of the people outside of the cities live on very little money and make do with the most basic living standards. You won’t find en suite bathrooms here.

After surviving the horror journey we basically just crashed for the first evening and hit the sack very early after getting some food. As our hotel was booked up for the following days we had to change location and came across a nice hotel a little bit more removed from the bustling city centre. The hotel itself and the staff were very nice but at $22 a night it was probably a bit overpriced. We rented bikes and explored a bit of the city and surrounding countryside and it really was a nice way to get a bit of perspective on the city. The way of life here in LPB is so relaxed and the people really go at their own speed, it kind of rubs off on you after a while. No matter where you are you’ll be close to a temple of some monks will walk past you, they are always going somewhere it seems. They kind of dominate the city.

We checked out trip advisor for some tips on what to do and where to go and places like Utopia were high on the list. It’s basically a very hippie-esque relaxation zone and a firm favourite for all travellers in SE Asia. You can go there and read a book, talk to fellow travellers,  do some yoga or simple have a beer and gaze at the river. In our days in LPB we did all of the above.

One amazing thing we did do during all the relaxation was (no I’m not going to describe how I got overcharged for my haircut and how the barber just used normal paper scissors to chop my beautiful hair) visit the amazing waterfall located about 30 km from the city. You can see from the pictures that it really is magnificent and the water is so incredibly blue and green. It was such a delight to be able to take a dip. The water was cold but once you make it in you sort of get used to it. Great for waking you up after any alcoholic beverages on previous nights.

All in all a city wot visiting and really the place to be if you want to sample some nice food, nice drinks and see some beautiful temples. The influence of the French dominance in the area is very noticeable (bakeries and sandwiches galore) and if you happen to take a bus from Vietnam to LPB then you’ll be glad that the city telly lends itself to some serious relaxation! 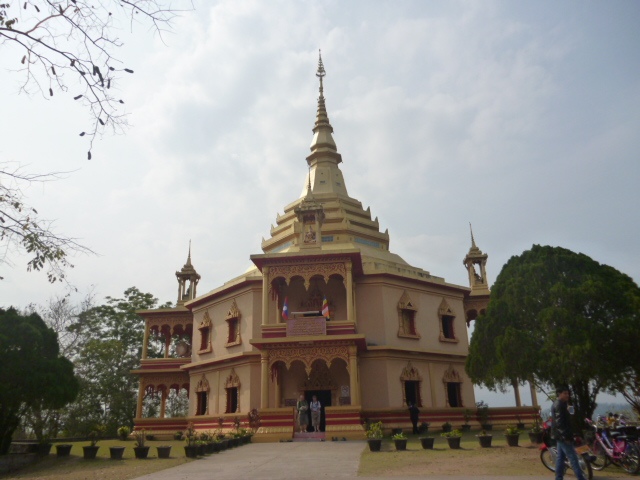 The view from the top. Surrounded by mountains and the Mekong 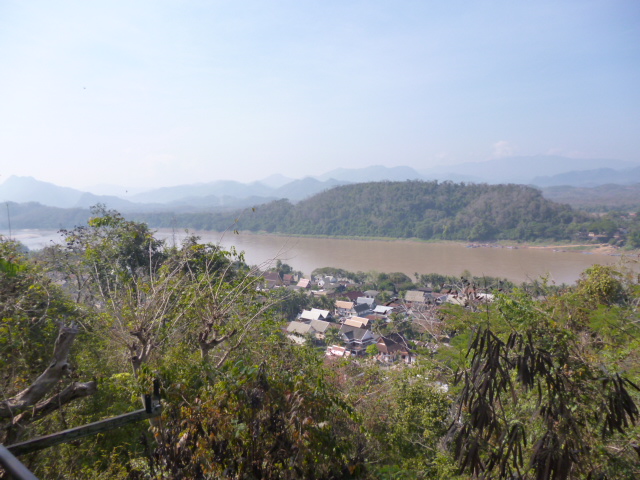 This would definitely be next on the shopping list for my friend Stefan. Go on you little robot! 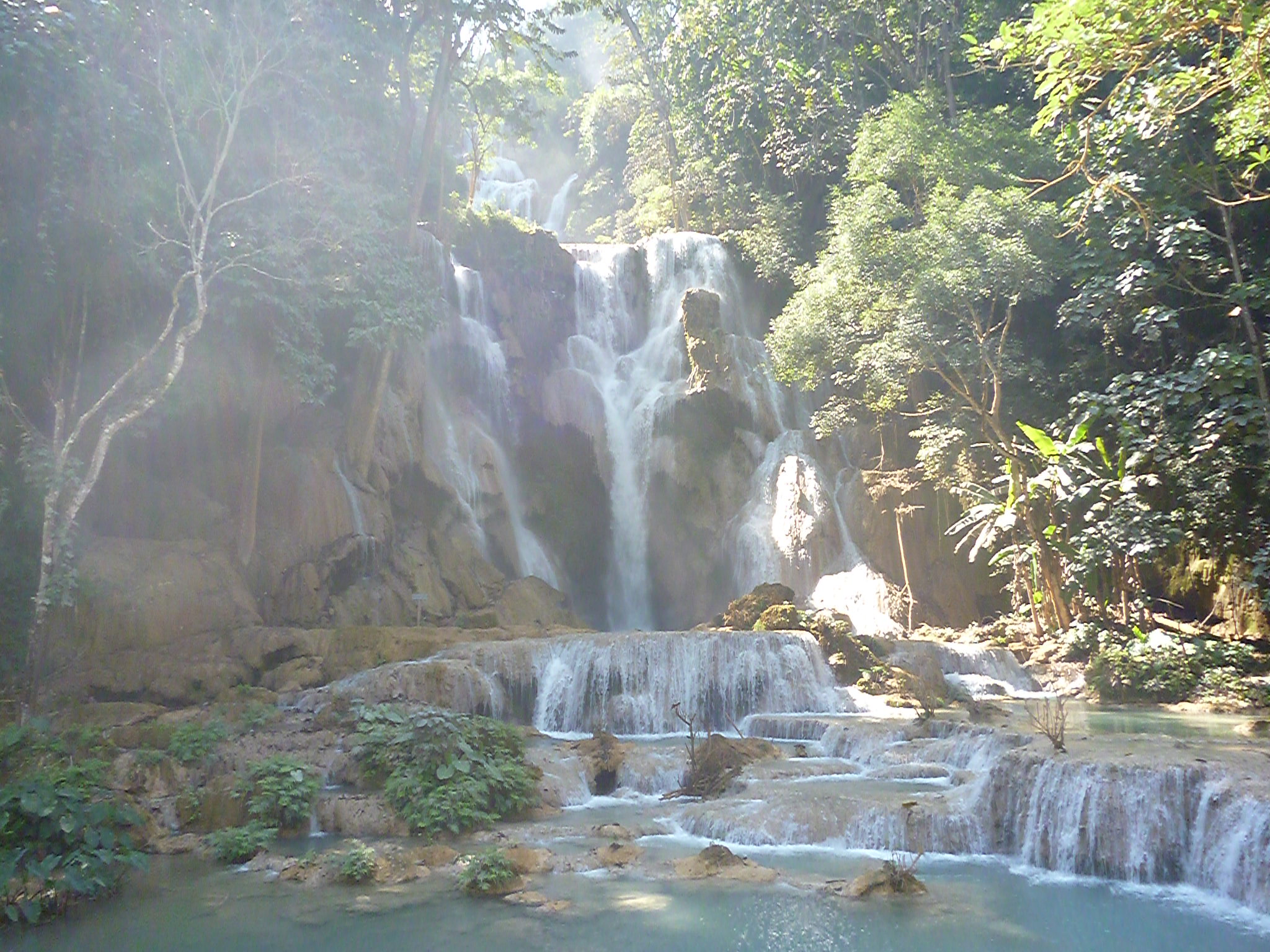 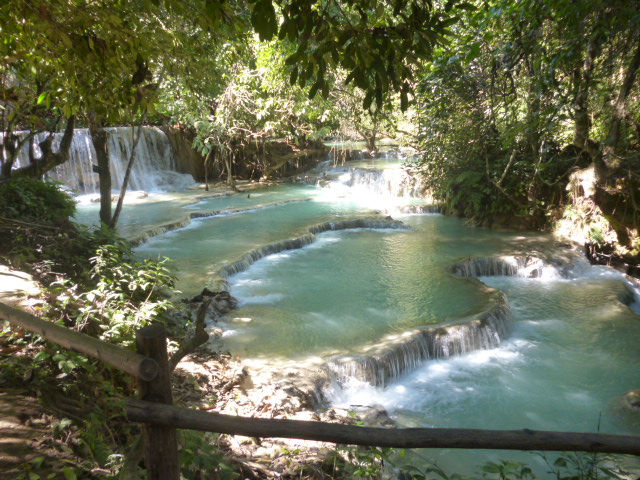 What a beautiful colour 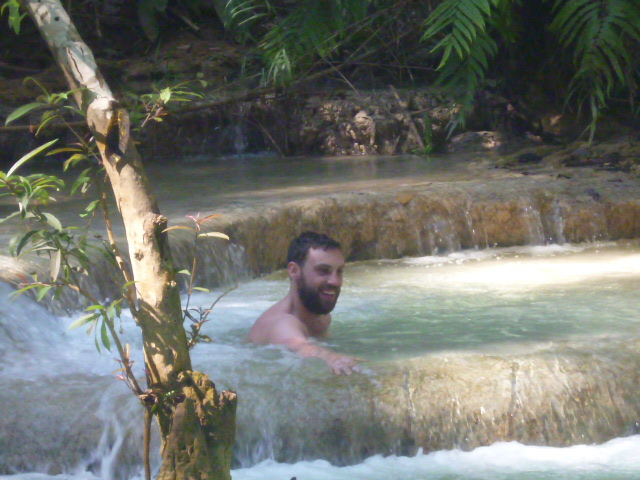 Some visitors found the water to be a little chilly

After taking in the waterfall don't forget to stop off and check out the bears. They have been rescued from poachers