Up til now we’ve been a but underwhelmed by the food here, but overwhelmed by the kindness and warmth of the people. After a bit of a scare in Thailand we fell in love with how genuine the people are here and it really helps you relax and enjoy the country. The food could be hit and miss but the people were excellent. The actually couldn’t do enough for you which was so refreshing after Thailand.

We’d take a dodgy bus from Hsipaw to Inle lake with our new accomplice Mark/Gongman. We’d kind of been at a loss to organise the next step of the journey and Mark suggested a hotel where he was staying and we followed his advice. We got in from the night bus at 5:30 am and as usual there was a clamour of tuk tuk drivers there to help us find our destination, in fairness these guys were fairly OK as it goes and one even gave me his blanket to keep warm on the ride (at this time of the morning it’s freeeeezing especially after just getting off the bus). Upon arrival at the hotel we could tell straight away that this woman was going to buck the trend of nice people in Myanmar, she became public enemy number one for Mark! Bit of the opposite of a midas touch, everything she touched turned to crap and she seemed only interested in pitching you something where she would get a juicy commission. We thankfully could check in early and hit the sack straight away!

In hindsight our journey through Myanmar turned on such fine margins. After our short nap we got up and popped downstairs to rent bikes from the hotel, do a brief tour and grab some brekkie. We returned at about 12 and then just relaxed in room for an hour or so. We were a but undecided about what to do for the day and I eventually suggested going out for a spin on the bikes to discover more about the town and surrounding area. Who did we see going out the gate but Mark. He was about to go off for a cycle himself and we decided to keep the group together and join him. How different our travels in Myanmar would have been if we hadn’t met downstairs in the courtyard.

Previously we’d been on the trek, sure and we’d taken the same bus but that was sort of a coincidence and not planned and we’d really never spoken any further about our plans or hanging out any more afterwards. But that chance meeting downstairs led to us hanging out that day and then the next and so on. It was a really cool crew. Mark was easygoing and had a great sense of humour and was up for anything and really interested in seeing as much of the country as he could before his flight on the 14th of March from Yangon. So in total we travelled for 5 stops together spread out around 10 days/2 weeks.

In Inle lake we went to the vineyard just outside the city, we did the obligatory boat tour on the lake and we went for a massive ride to the other side of the lake and relaxed before getting the night bus onwards to Mawlamyine. Inle lake was probably the most touristy place we visited but it still was fairly relaxed and quite nice. We stumbled on some amazing BBQ food stalls where you could mix and match what you wanted and in a search for a relaxing beer, Mark and I found the nicest food in Myanmar. It was a small BBQ restaurant where they did the most amazing deep fried tofu and the most incredible spicy dip for it. We spent 2 nights there enjoying a great bite to eat, a nice cold beer and some amazingly friendly service from the owner of the establishment. The food was not only delicious but easy on the wallet.

We had to leave sometime and in the end we settled on doing a hard overnight trip to southern Myanmar, but once we had that over with there would be no more horribly long rides for a while. 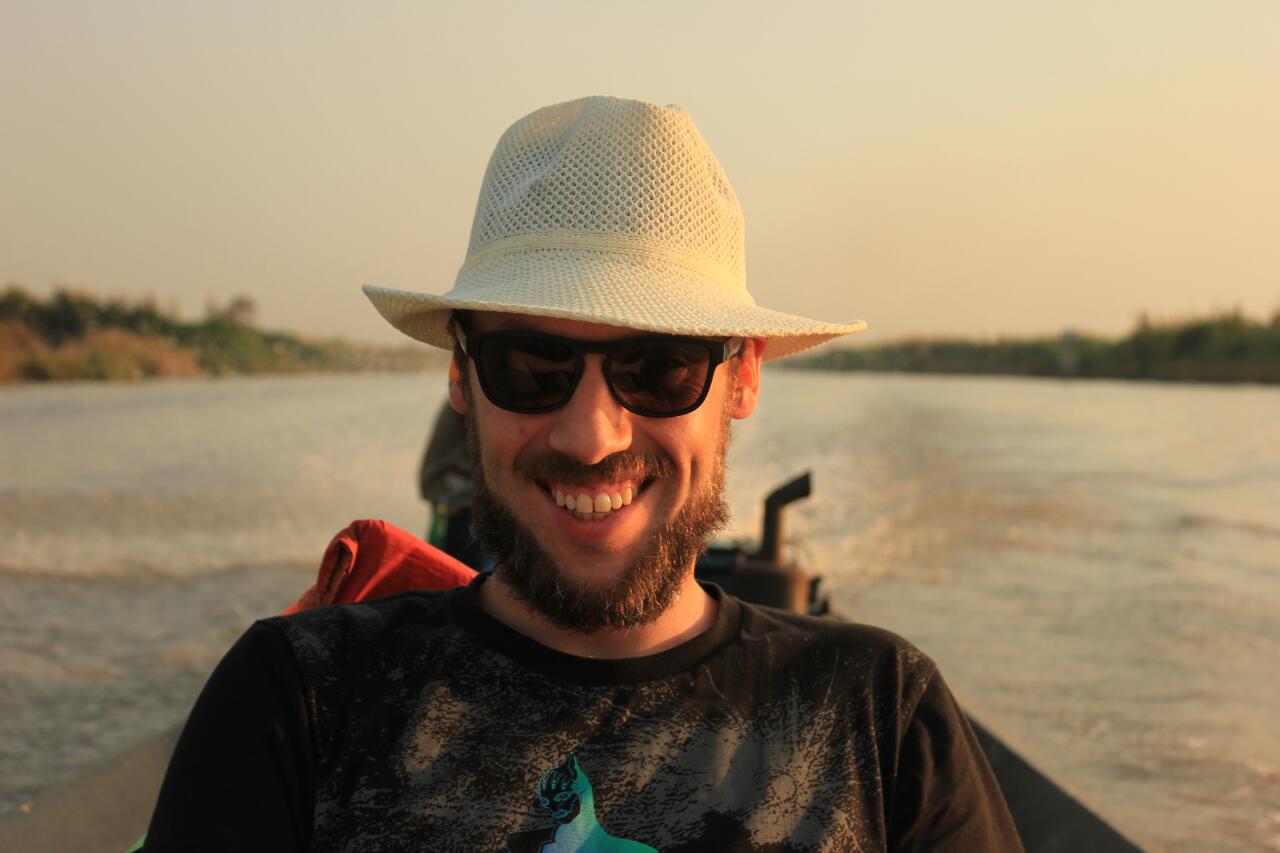 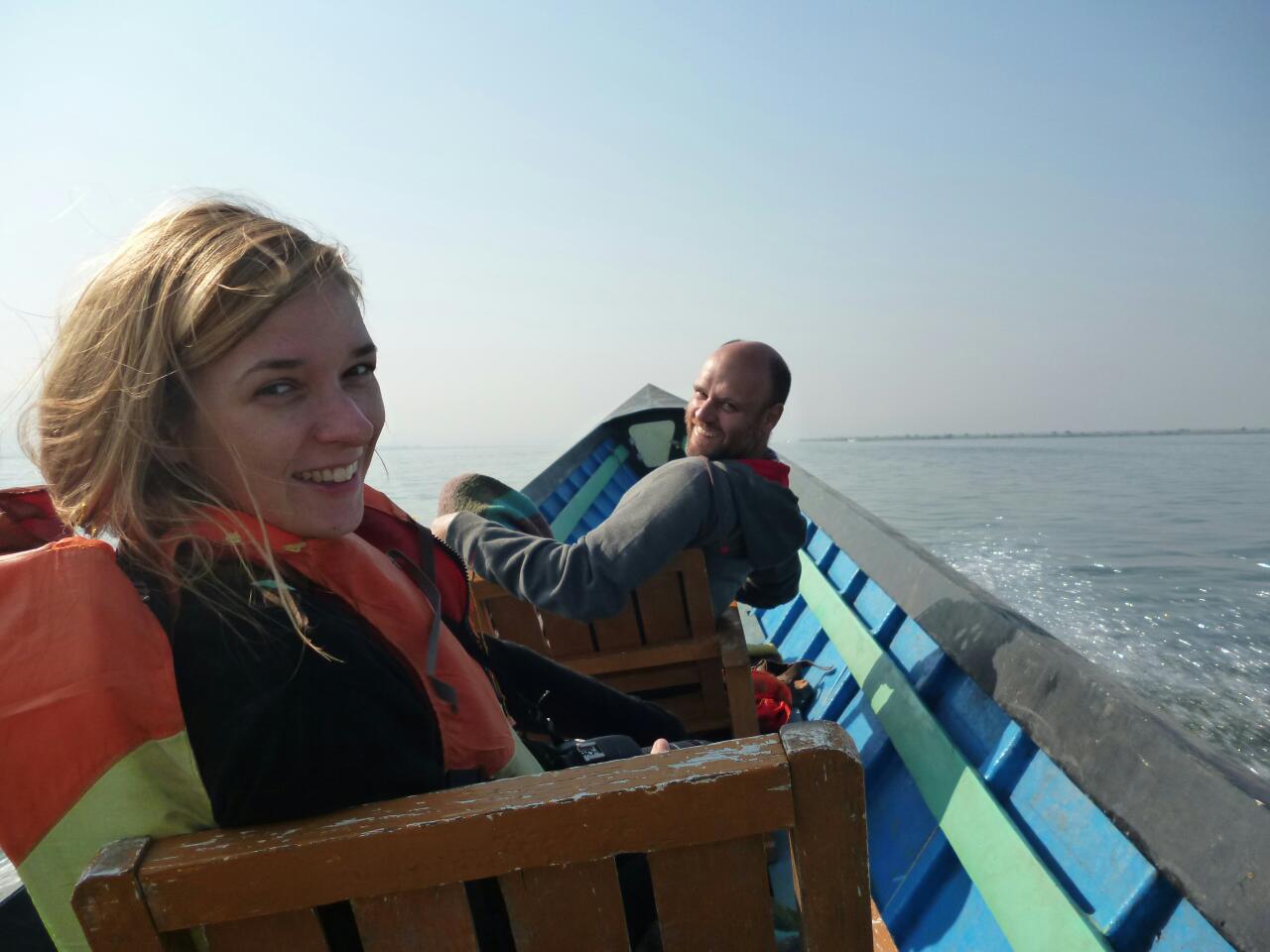 All ready for our boat day 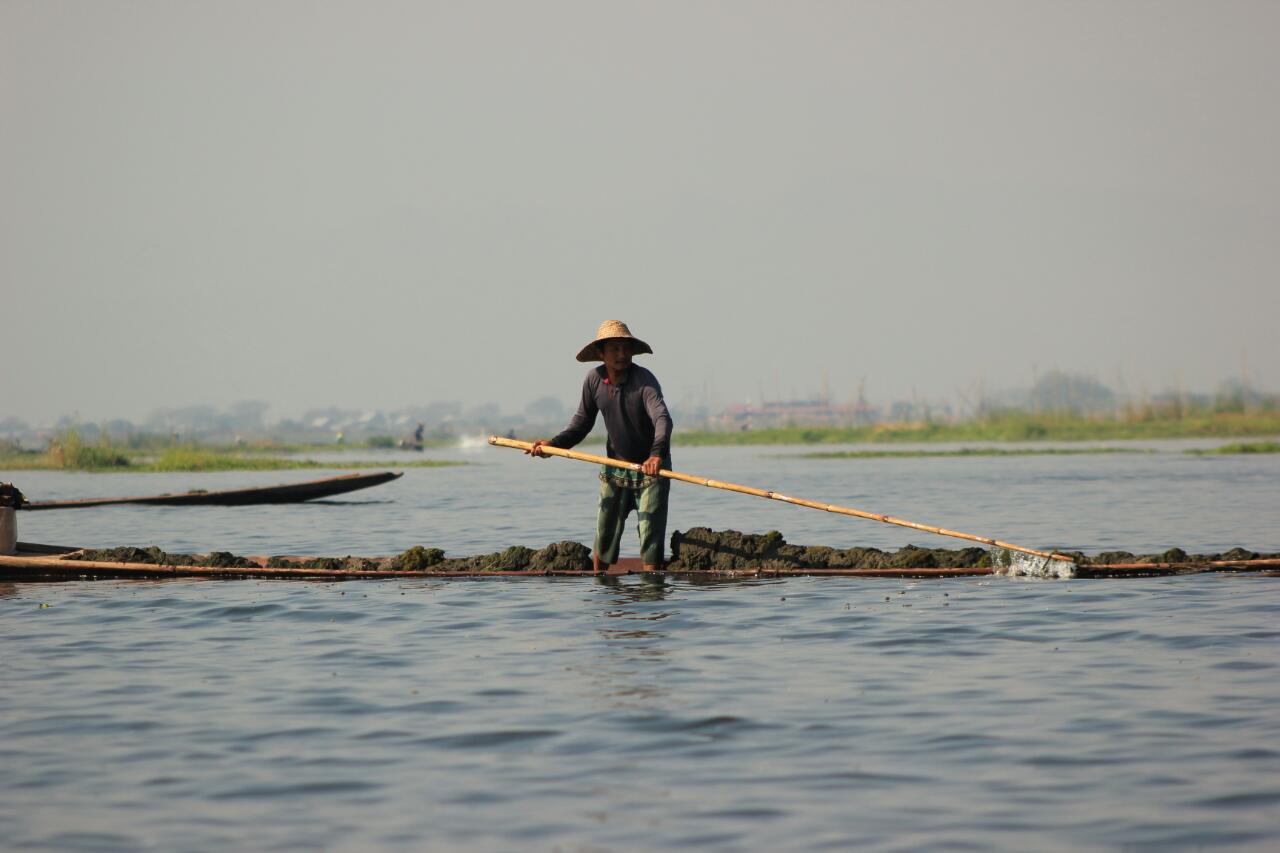 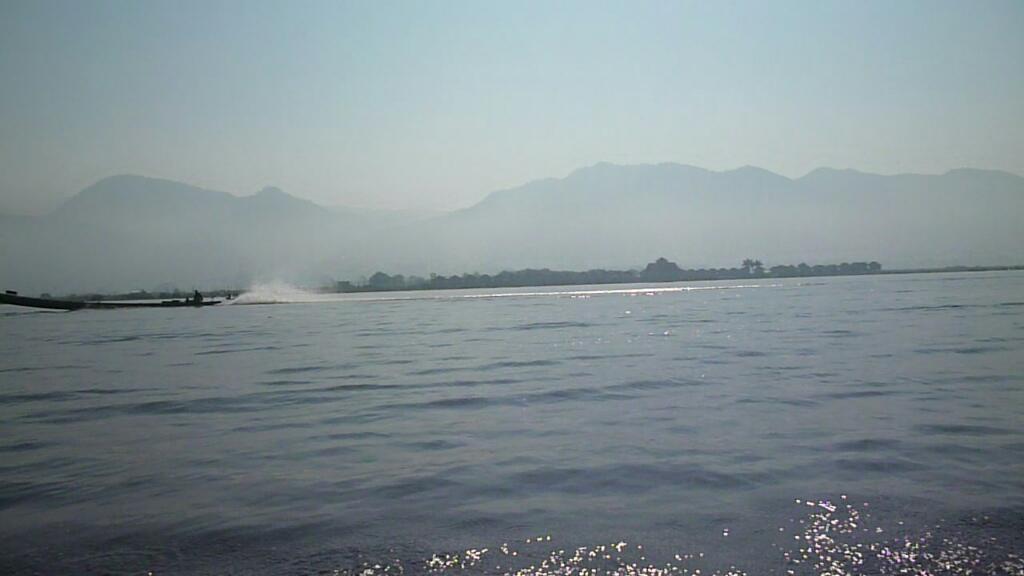 Inle Lake and our boat day 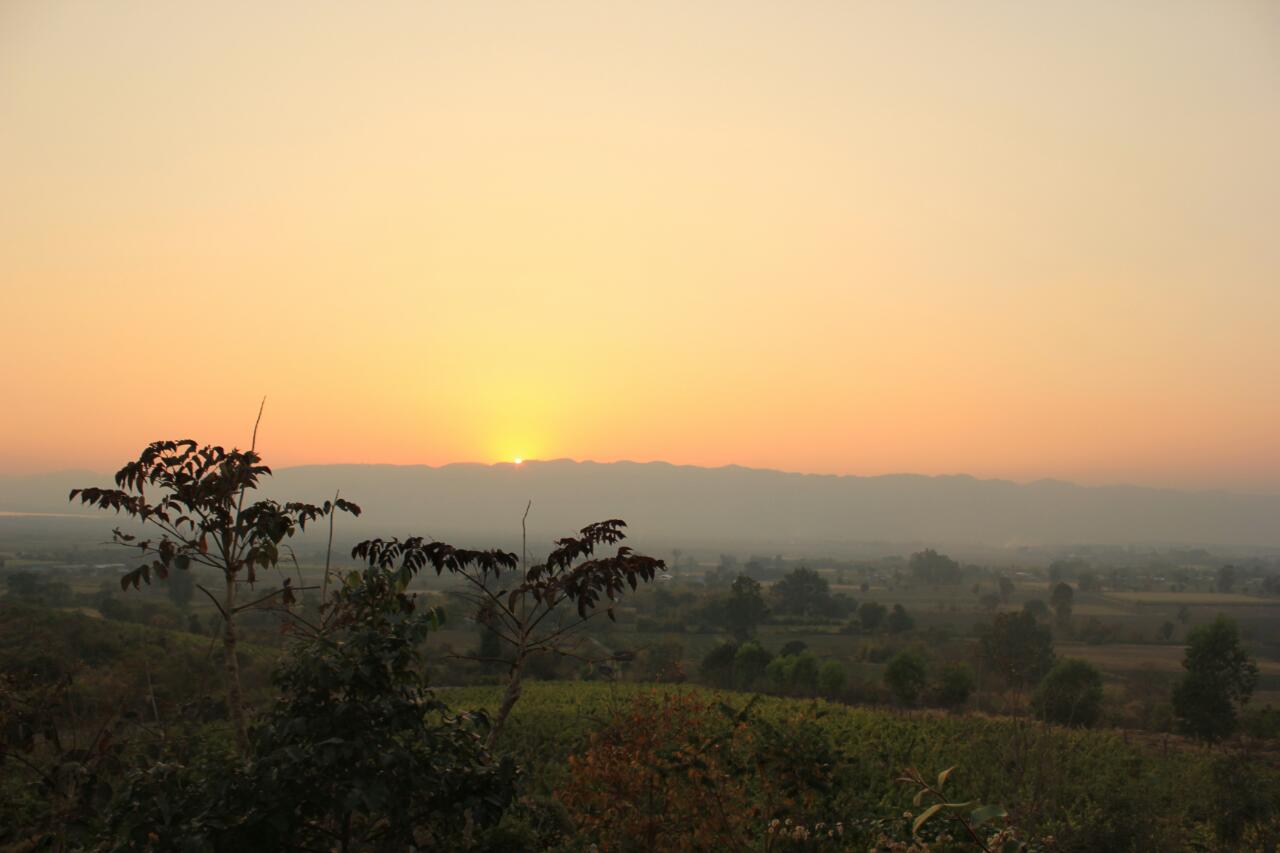 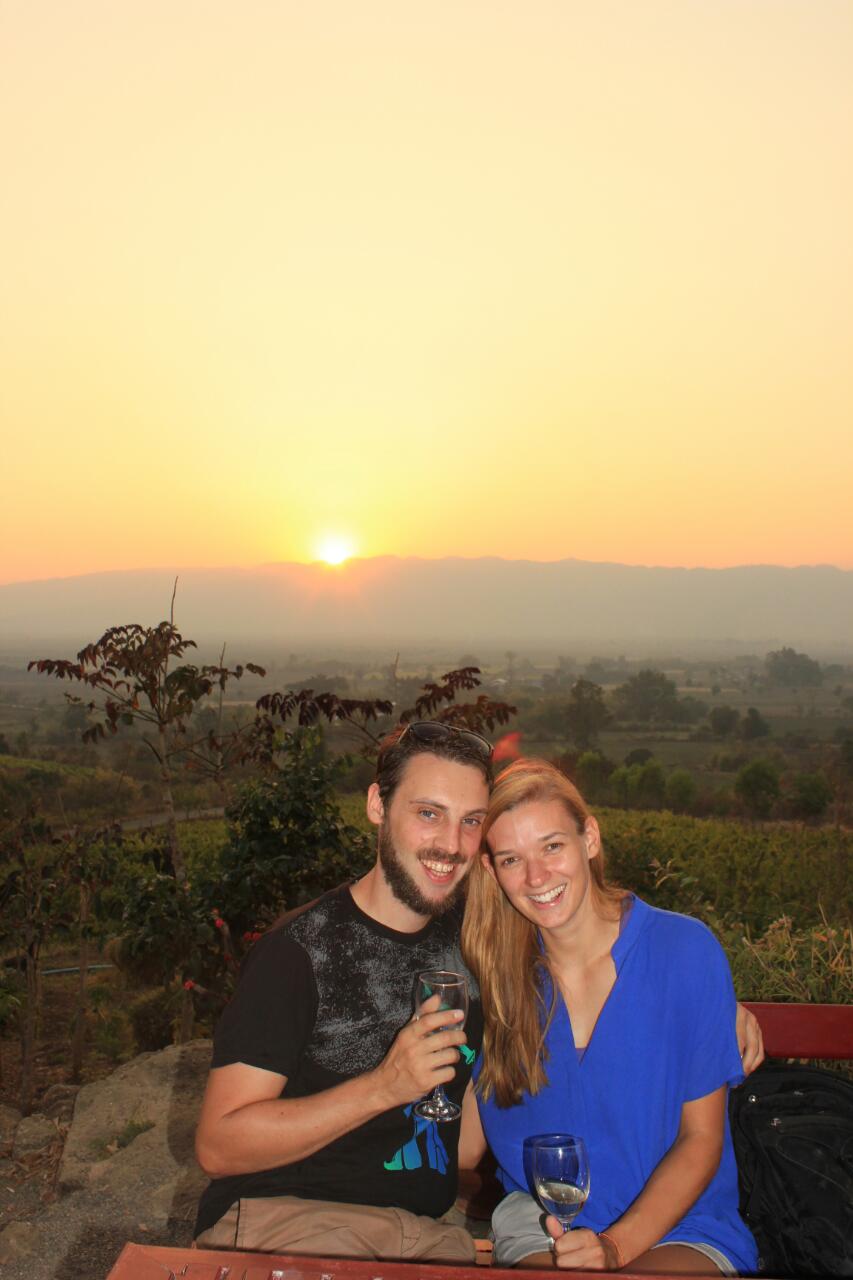 Sunset with a nice glass of wine