So we took the rather famous train from Mandalay to Hsipaw and arrived at around 6 pm after a grueling 14 hr journey. Yes the train ride took almost 3 times the amount of time as the bus, but the views and experience on this old train were rather cool and worth it in the end. (I probably wasn’t saying this at the time but it is nice to look back in these things and realise it was quite cool being part if that spectacular journey) Hsipaw is the gateway to many treks in the Shan state area and thus was our reason for visiting.

After having such a cool time in Sapa we were quite intrigued by the thought of trekking in Myanmar. Most people go to a town much further south and trek to Inle lake, but we wanted to avoid the massive tourist groups. I have to admit that the train ride had taken quite a bit out of me and I was feeling worse for wear and in need of a good sleep. This was not going to be the case at the place we were staying at as the noise level from the main road was unbearable. Sadly we had booked in advance and already paid and our options were limited. In went the ear plugs and off I went for a right nights sleep. Steffi had organised a trek for the following day so we needed as much sleep as we could manage.

This is where we met Mark AKA “Gongman”. Mark hails from a little known hamlet by the name of Stoke on Trent in the merry old land of England. He lives in Oxford, but was on a bit of a break from work to explore some of the countries he’d missed out on during his previous tour of duty in SE Asia. He had bought a hand made gong in Mandalay and had chosen to carry it around with him for 3 months through Myanmar, Nepal and Sri Lanka. It turned into a bit of a running gag that you would randomly hear him bang his gong somewhere in the building and it was kind of like a tracking device to find him! We met Mark in Hsipaw and actually ended up travelling together for a good few days and multiple cities. He’s a fun, easy going dude and we enjoyed many a beer together, but more on that later.

We started our trek after a brief tuk tuk ride outside the city and although it may have been only 8:30 am it was already hotting up quite quickly. Our guide, Aung son was very quiet but seemed to warm up to us in direct correlation to the rising of the mercury. The pace was easy, but even in the morning the heat really meant you had to take on water constantly. Our group also include 2 ladies from France who were only along for the day. With a mixture of my poor French and their rusty English, we were able to chat to them and figure out what they were doing in Myanmar, where they were from and what the did for a living. Bonjour indeed! After only about 30 min we already had a highlight….a gigantic snake. Afterwards I learned some valuable rules which I want to share with you.

Rules for dealing with a snake:
1. Don’t chase it – that seemed to annoy him
2. Don’t pretend you’re suddendly paparazzi – he didn’t seem to like the limelight
3. When he coils up, run away – you could tell he was saying f-off people

It was pretty intense to have this creature up close and personal and once he coiled up ready to pounce, let’s just say shit got real. 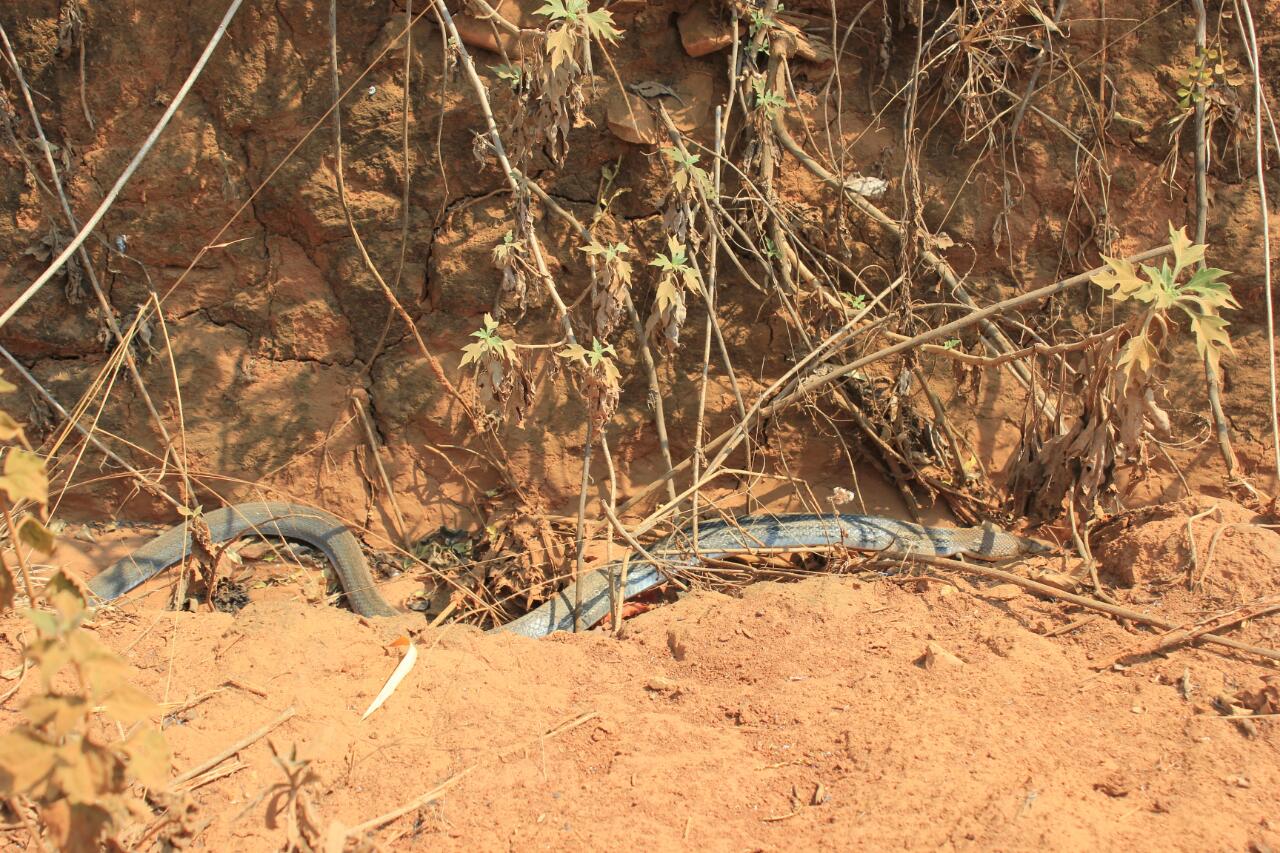 Moving onwards and upwards was our next job and by this stage we were suffering from the heat. The only rest we got from the glaring sun was a little shade formed by some trees near our dirt track. Already sporting my man from delmonte hat, which I’d picked up I  Mandalay, we kept a decent pace and soon the views just got unreal.

Have a look for yourself: 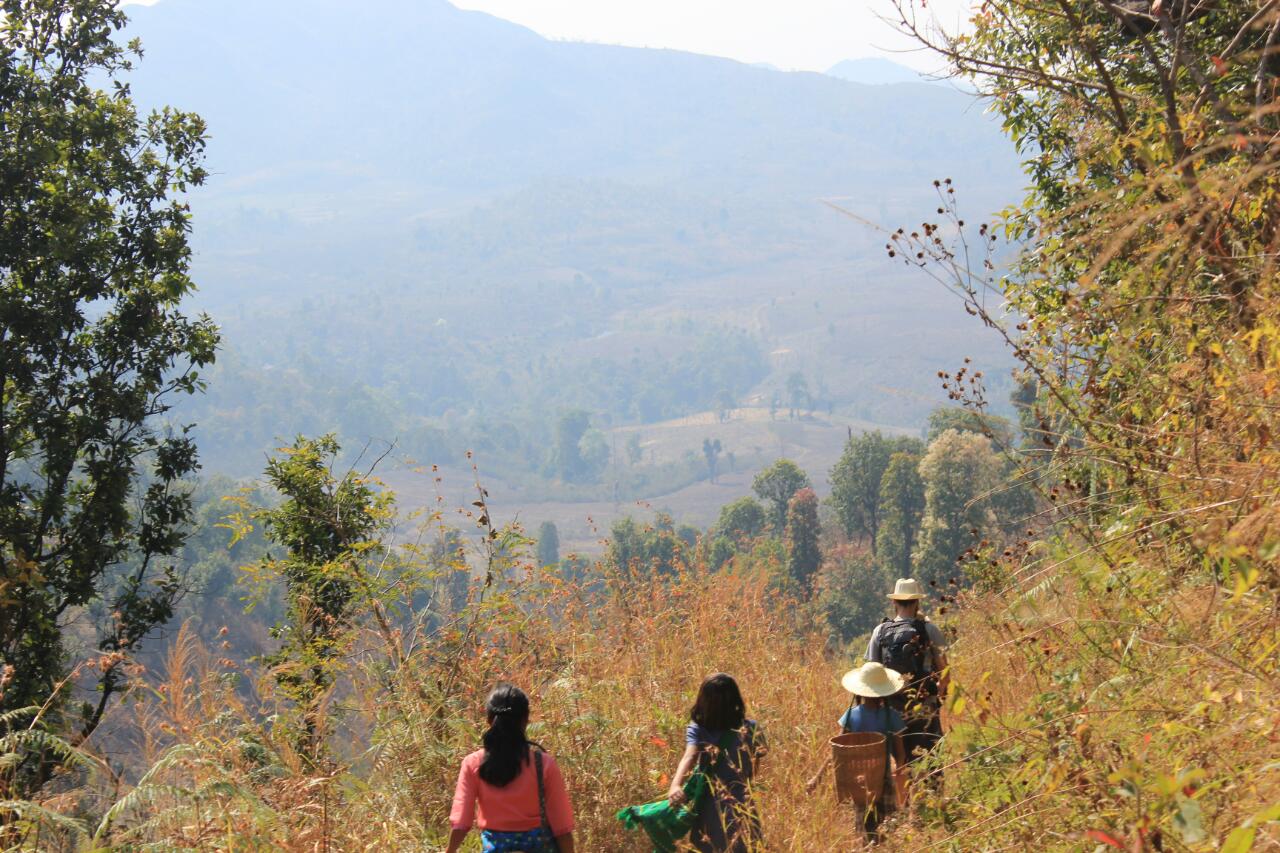 Some locals on the way to market 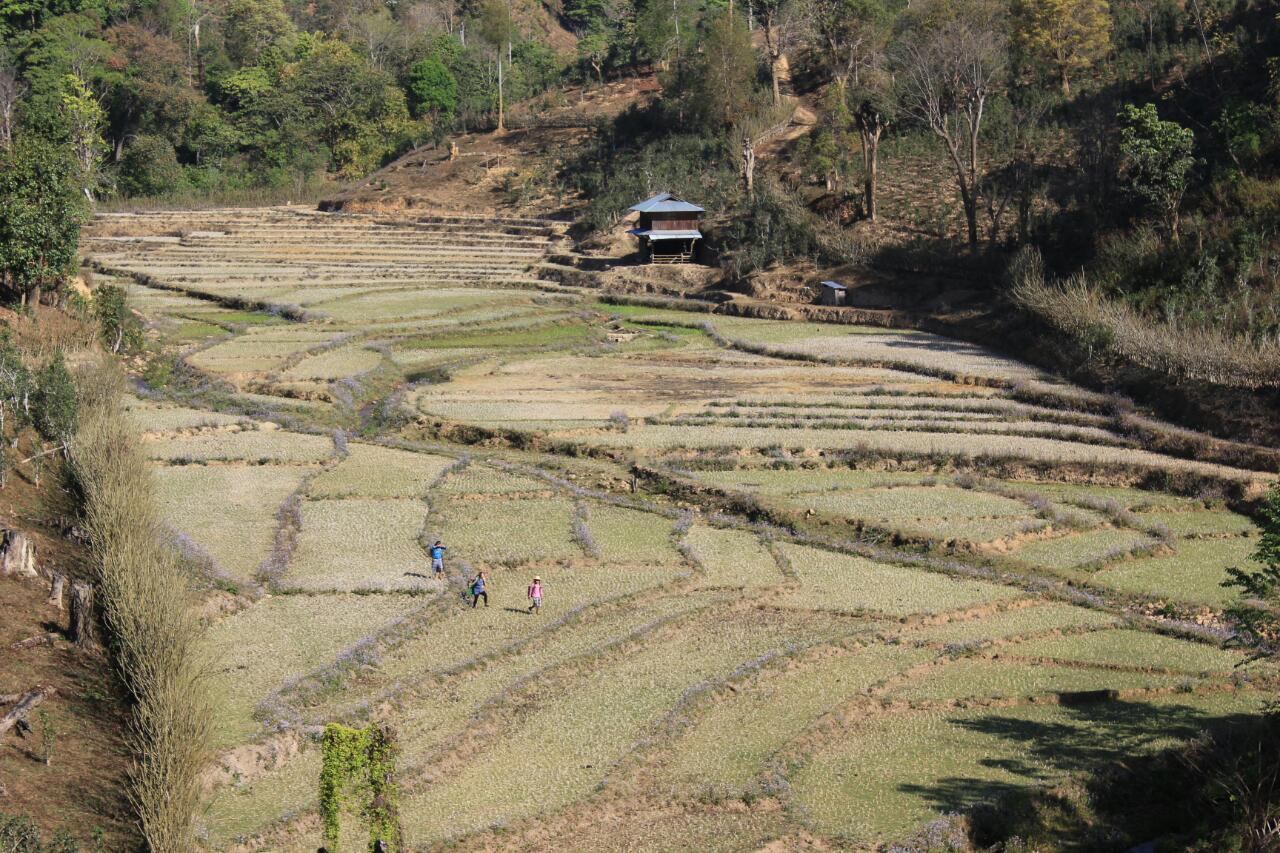 Rice fields, not yet in use 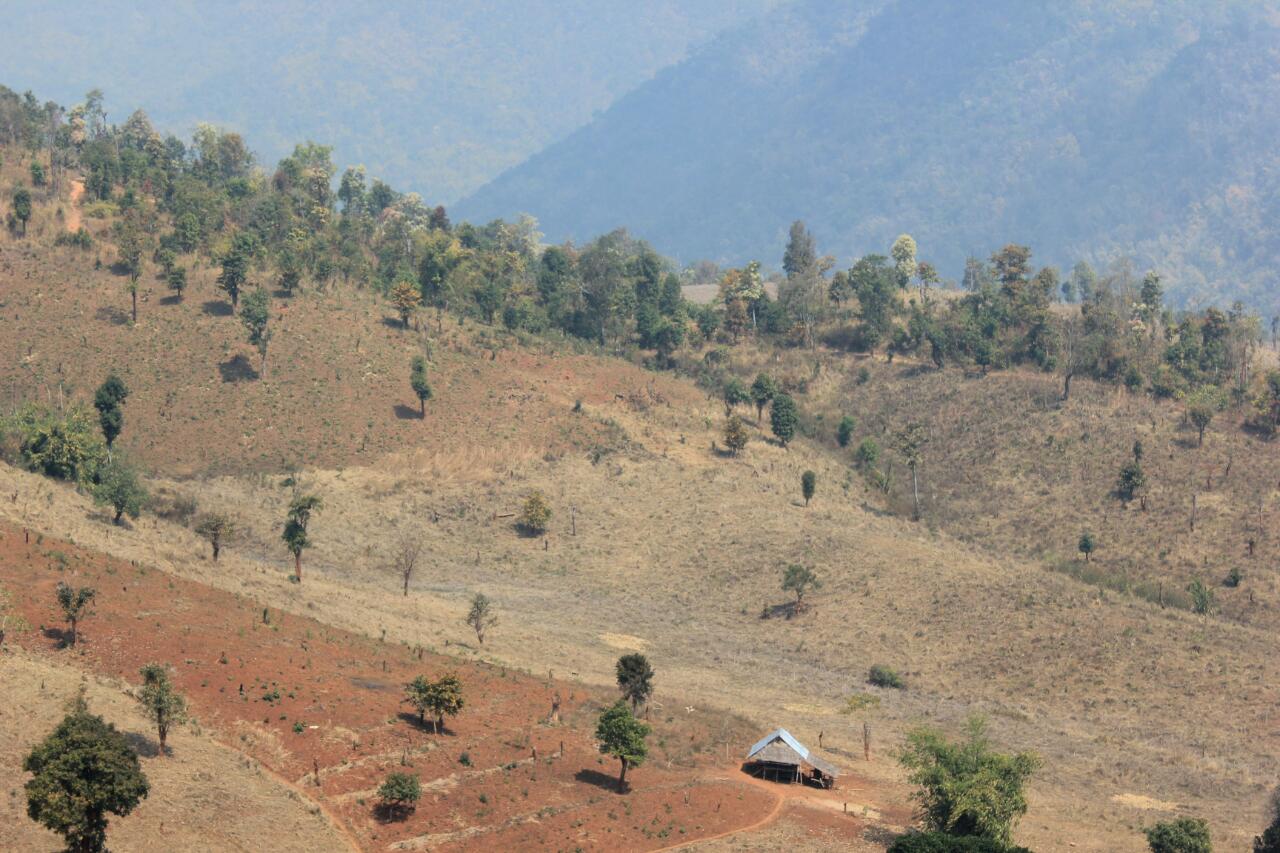 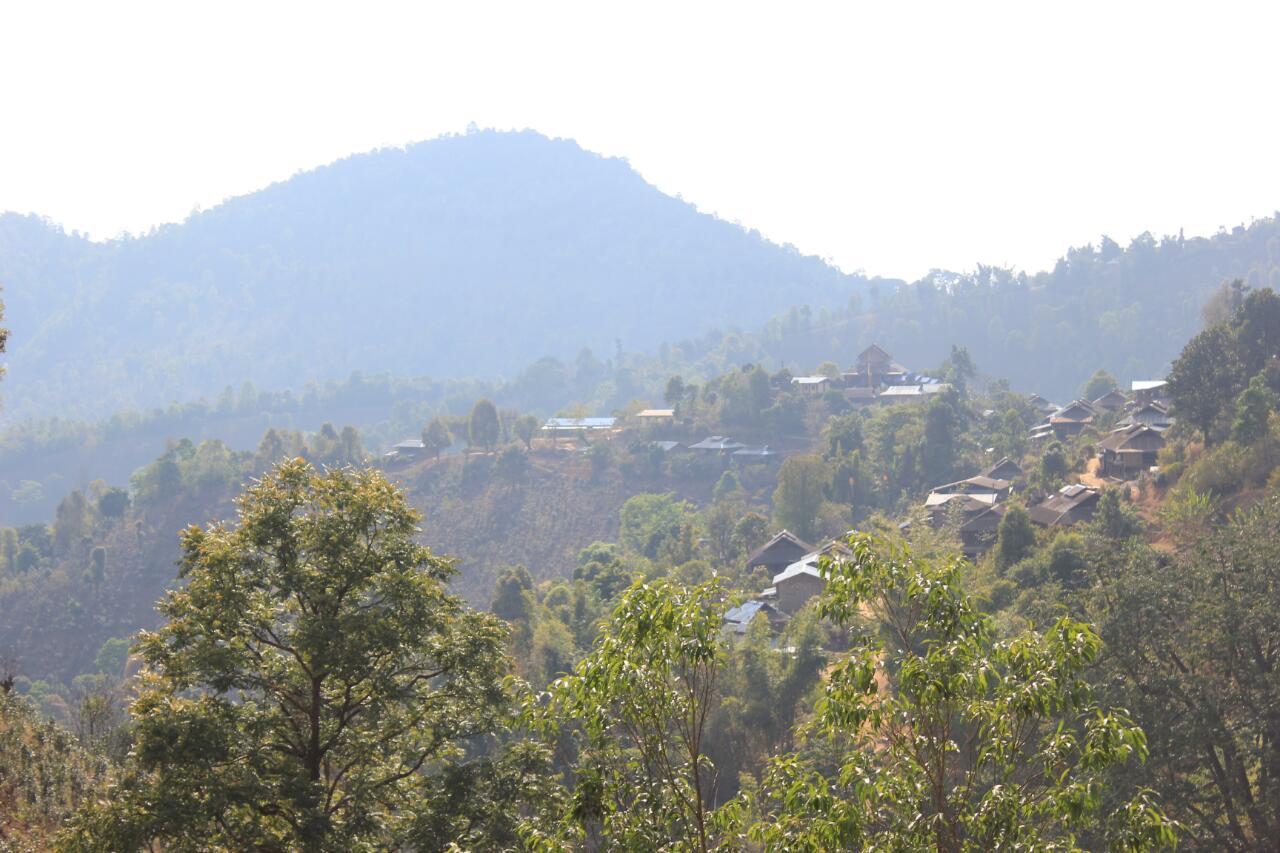 Our village for the night 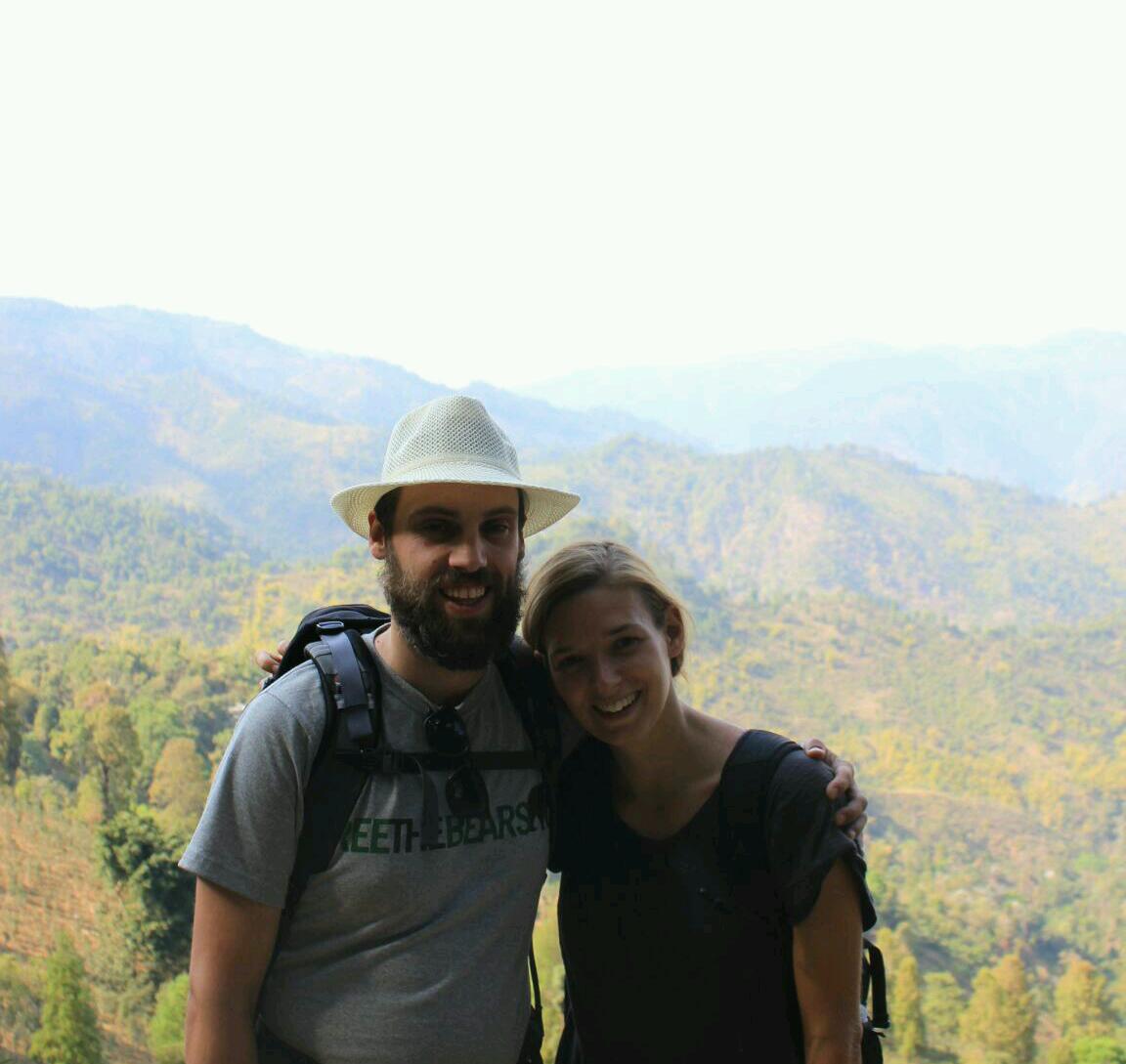 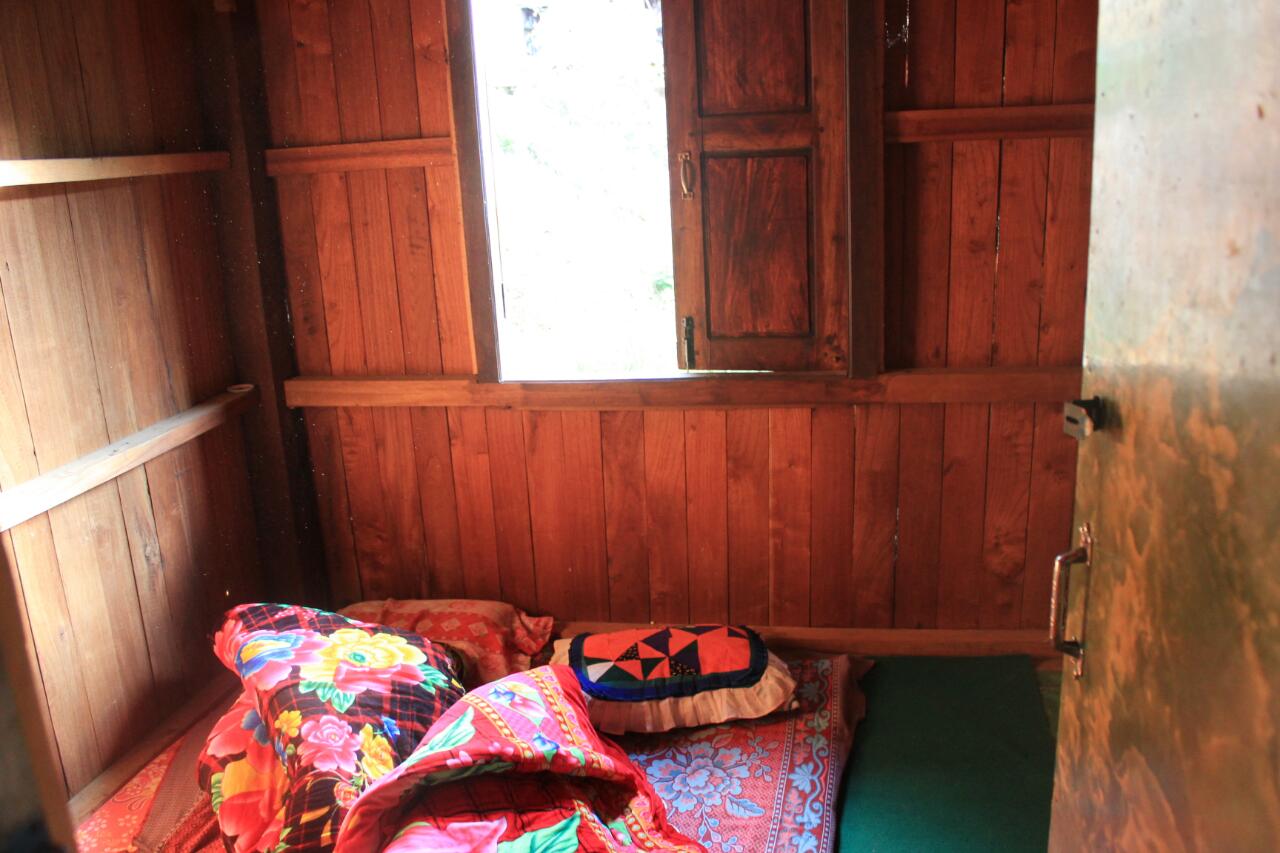 We finished our trek at about 2 pm as it was just too hot to keep going and we’d reached our destination for the night. It was Aung Sons village and it looked amazing nestled on the mountainside. We had a bit of fun knocking a sort of wooden/woven ball around and then just relaxed and enjoyed the views and waited for dinner.

In general I have to admit that food here isn’t anywhere near the standard of neighbouring countries. The food is usually very simple and often quite vegetarian. It can be often very greasy and at times the quality can be somewhat lacking. Obviously rice is served with every meal, but there comes a time when you can’t just eat rice 24/7. Sometimes you can get a curry but it’s a little different from Thailand and India. The meat is cooked and then sits out all day so by the time you eat it it will be cold, served with vegetables and rice. It won’t blow your socks off, but you just need to manage expectations. We did have exceptions to this, but you do need to look a bit to find really good eateries.

We decided to play a few games of cards and then called it an early night as we were all fairly wrecked. Off we went down the garden path to the outhouse to do our business and the we brushed our teeth by torchlight and with water from the small tank that the family fills from a well about 1 km from the house. Village life can be tough,  but it was good fun and a really great experience to just live in the house with the family. They didn’t even pay much attention to us so it was nice to just observe them going about their daily lives.

Day 2 of trekking gave us the chance to take in some serious views and to stop off at a few villages for the obligatory 3-in-1 coffee, mm yummy! The heat was fairly intense and once we came down from the mountains the trip turned into more of a walk as we were back on dirt tracks and sort of roads again. We eventually made it back to the valley and had a quick bite of lunch before being picked up and brought back to Marks hotel where we were kindly allowed to grab a shower and freshen up before our night bus to Inle Lake.

All in all it was definitely worth the trouble to get here to do the trekking and the experience of living with the locals and properly interacting with them was priceless.

One thought on “Hsipaw and our adventures with Mark”