So eventually it was time to reach the capital of Vietnam. Hanoi is a vibrant, large but manageable city. It’s a bit like Saigon but the weather is definitely quite different! We arrived on the 11th really early at around 9 am and it was pouring rain, something we were quite badly prepared for. Every time you get off a bus in a new place it can be pretty confusing and mostly I get disorientated from the guys shouting at you when you disembark. Usually they are trying to sell you something, get you to sleep in their hotel or get in their dodgy taxi! Maybe everything is above board but somehow I’m programmed to be cautious with those guys. We walked a bit away from the bus and managed to have fortune on our side as a taxi just dropped some people off and we hopped in. We managed to show him the address of the hotel and I followed the taxis progress on my GPS.

When we arrived at the hotel we were greeted by Tam, the super friendly hotel manageress. She was obviously a bit surprised to see me so early but was so accommodating and said that we could check in early at no extra cost and even have breakfast for a special price while we waited for the room to be cleaned fully. That took about an hour and in that time we had breakfast and relaxed in the hotel bar/restaurant. I really have to repeat myself,  but the people in Vietnam are so friendly and helpful it’s so refreshing especially after Berlin, where being polite or friendly is often something reserved for good friends and not for strangers. Our room was my first experience or a room without a window, but it was clean and tidy with a big bed – Jackpot!

We basically spent that first day recovering from the trip on the bus and the last couple of days. I’ve really noticed how the sleeper bus trips can really take it out of you. It is definitely possible to sleep on the busses and you can get a solid 4 or 6 hours sleep in if you do things right, but the sleep is somehow not full sleep but like half sleep if you can understand that. Basically by the afternoon I felt totally wrecked again but that was OK. We just put on the TV and watched a film or two on the American movie channels. We only ventured out to get some food and have a look at the area we were staying in. We discovered a really delicious Korean place and got some wonderful cheap and yummy food.

We managed to organise a guided tour of the city on the next day. Our guide, Loan was super cute and friendly. At first she was a bit shy but warmed to us after a while. She really knew the city and had loads of interesting little point of interest up her sleeve. We spent the whole day walking around the old quarter of the city, the French quarter, the lake etc. We even visited the temple of literature and central prison (also later known as Hanoi Hilton – John McCain was a prisoner here during the war). By that stage we were really exausted and got a cheap taxi back to our hotel. I find it so interesting and charming that so many young Vietnamese people are willing to spend the whole day with you just to show you their city and practice their English. The tour is totally for free and is THE best way to explore the city. We gave our guide a little present for her troubles but she was really unwilling to take anything. In the end we made a small contribution to her next monthly bus ticket!

One of the best things that we discovered in Hanoi was the food. We definitely had some great meals in the city and found some really interesting places to eat. “Bun Cha” was my favourite. Loan translated it as “green pork”. You basically got a bowl with warm broth and in the broth there were pieces of barbecued bacon and like meatballs. Add to that a plate of rice noodles and a small basket of greens like mint, lettuce and some other leafy veg and you got yourself a meal! It might not sound like much but it was so delicious. You put some noodles in the broth, then some greens and just dig in. A full meal for around €2. Another firm favourite on the gourmet list was a “chocolate bun”. A sort of sweet bread filled with chocolate, but taken straight out of the oven every time so it was like a goooy hot sauce. AMAZING! Let’s just say I haven’t gotten skinnier since arriving in Asia.

So a supposed “must see” location in Vietnam, Halong Bay was next on the list. I could go into detail on this trip, but due to the fact that it was a bit of a let down I’ll keep it short and sweet. Uncomfortable 4 hr Mini bus ride there on the emergency seats an uncomfortable ride back. We had booked a two days one night trip with an agency and it was really rushed. Get on boat, have lunch, go visit some limestone caves, go kayaking for 30 min, have dinner, drop anchor and then free time. The views were amazing with the many many limestone mountains popping out of the sea. The boat was also nice and the other people on the boat were really nice, but the whole experience was so condensed and optimised to basically only give you max 24 hrs for $75. Quite pricey. In the evening we chatted to some of the other people on the boat and did some fishing for squid, even came close to catching one. They came around and nibbled on the line or bait from time to time but we couldn’t reel them in, clever buggers! The next day was basically as crammed as the day before. After a nice night sleeping on the boat it was an early 7am brekkie and basically back to shore, via a quick stop at a beach on one of the little islands. Then back in the minibus to Hanoi.

Kind of a downer as I had expected more bang for my buck, but it was nice to have done something different. It’s so over comercialised that I don’t think it’s possible to really experience Halong Bay unless you pay a fortune and have you own private boat. Our tour guide was possibly one of the most annoying people ever. So that didn’t help matters. “Linda” could really do with brushing up on her political correctness and investing in a new, less annoying way of speaking. On the positive side the weather was cracking for both days, sun splitting the rocks!

Back in Hanoi we quickly looked into getting to Sapa, in northern Vietnam near the Chinese border and then booked a bus for the next day in the evening. That gave us enough time to get up early an grab a taxi to the Ho Chi Minh mousaleaum. So began an extremely funny adventure. We got there quite early as the mousaleaum only opens a few hours a day. Entry involves a fair few security checks and leaving electronic goods and bags in cloakrooms etc. Then we somehow randomly ended up in two parallel queues bother lined for as far as you could see with little Vietnamese kids, maybe aged about 5-6 years old. Now these kids all acted differently upon seeing two westerners. Some said hello and waved. Some ran off as fast as they could and some entered into what can only be seen as a “stare off”. In any case none of them wanted me to stand in line with them, something the very strict looking guards didn’t like. It was cute and kind of funny all at once.

That was the highlight of the visit to see Ho Chi Minh, the man (or body) himself is held in a big glass casket but his body doesn’t look real, somehow more like a wax figure then a dead body. You get a brief glance as you walk past, but the guards are ushering you along and it’s over in a second. Still a cool thing to do and the building itself is really special from an architectural point of view. Well worth a visit.

That just about wrapped up Hanoi for us and all that remained was to say bye to the amazing dudes at the hotel, with whom we enjoyed a farewell beer. Fair play to them for drinking on the job! Up next; proper winter (around freezing) in Vietnam, Sapa here were come! 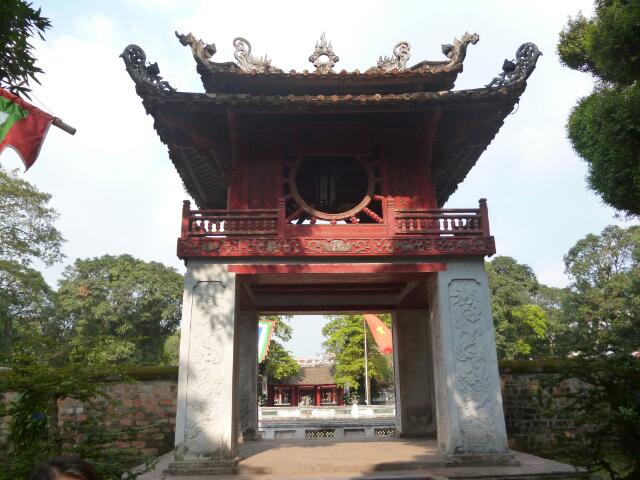 Cruising through the islands in Halong bay 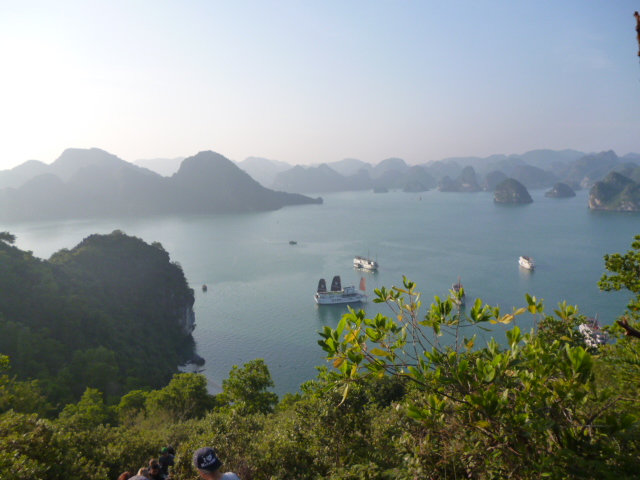 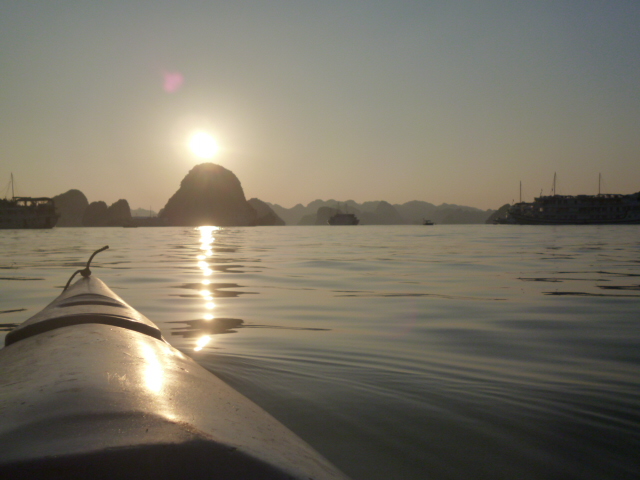 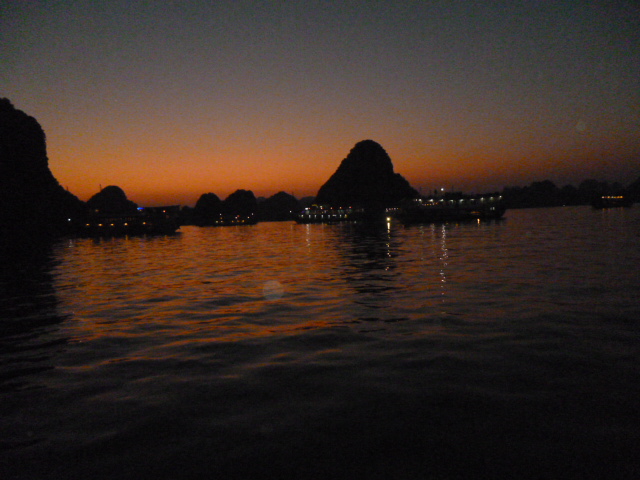 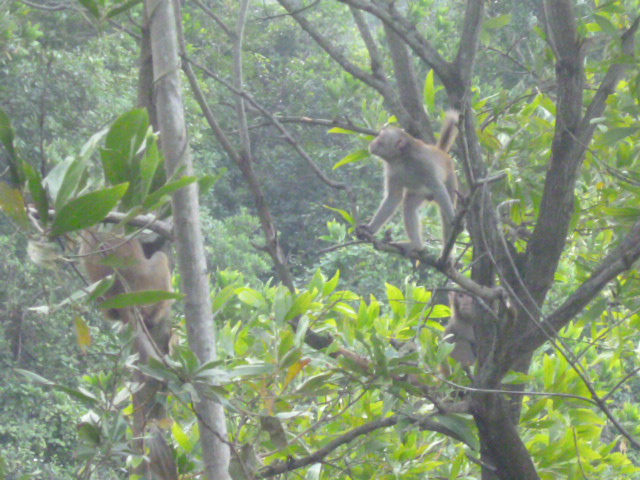 Some wild monkeys on one of the islands. How did they get there