We decided to go for the cheap option to get from Lombok to Flores and came upon the bus and boat option. Lasting around 28 hours it was one of the more grueling journeys, but as it was broken up into various sections and methods of transport it somehow flew by. The final leg of the journey was a several hour ride on a massive passenger ferry winding through multiple islands en route to Labonbajo. Even though I was completely wrecked from all the travelling it was hard not to be amazed by the landscape of islands dotted around you everywhere and the feeling of slowly moving through the large spaces of water between. By the time we arrived in Labonbajo I was nevertheless ready to just sit down and relax and get some proper sleep.

Now this next part of the adventure may seem a bit far fetched but it actually happened. We we exhausted from our travels, but I was certain I wasn’t going to stay in some of the absolute holes of “hotels” which we saw. This left us with a bit of a dilemma and at the end of the main street. We’d seen everything the town had to offer and weren’t amused. As I stood there thinking of our next move a man on a scooter just asked where I was going. I told him about our trouble finding a decent place and the he interjected “do you like to stay in peoples’ homes?”. I thought about it and said what the heck and went to visit his house leaving Steffi to keep an eye on the bags. He took me to the house on the back of his scooter and the house was massive for Indonesian standards. The room was big, clean and looked OK to me! I went out on a limb and said we’d stay. He said the price and it was very reasonable, so I was happy enough. We collected Steffi and the bags and plonked ourselves down.

In the following days we really had the full experience of living in an Indonesian family’s home. We meet the kids, the uncles and aunts and ate and drank with our new family. Even though it all came about a bit randomly it worked out for the best for all involved. The family lent us the is scooter and told us where we could go and see the sights etc. It’s was a real heart warming experience.

Obviously coming all the way to Flores was not just to meet the people but to see the Komodo Dragons. The island of Komodo is not far from Flores and all the tourists go there so you can find a cheap trip with ease. We booked a full days trip including snorkeling and the trip to the island to see the dragons. I have to say I was a bit sceptical as we had paid so little, but the boat, guide, food and tour in general was top notch. We visited a few uninhabited islands after seeing the big dragons and did some amazing snorkeling. The Komodo Dragons are way bigger than you might expect and I got a bit of a fright when I saw them for the first time. They were sort of lounging around and they do look pretty intimidating up close. It was a really nice day and really relaxing, just to look around and see the nature everywhere. 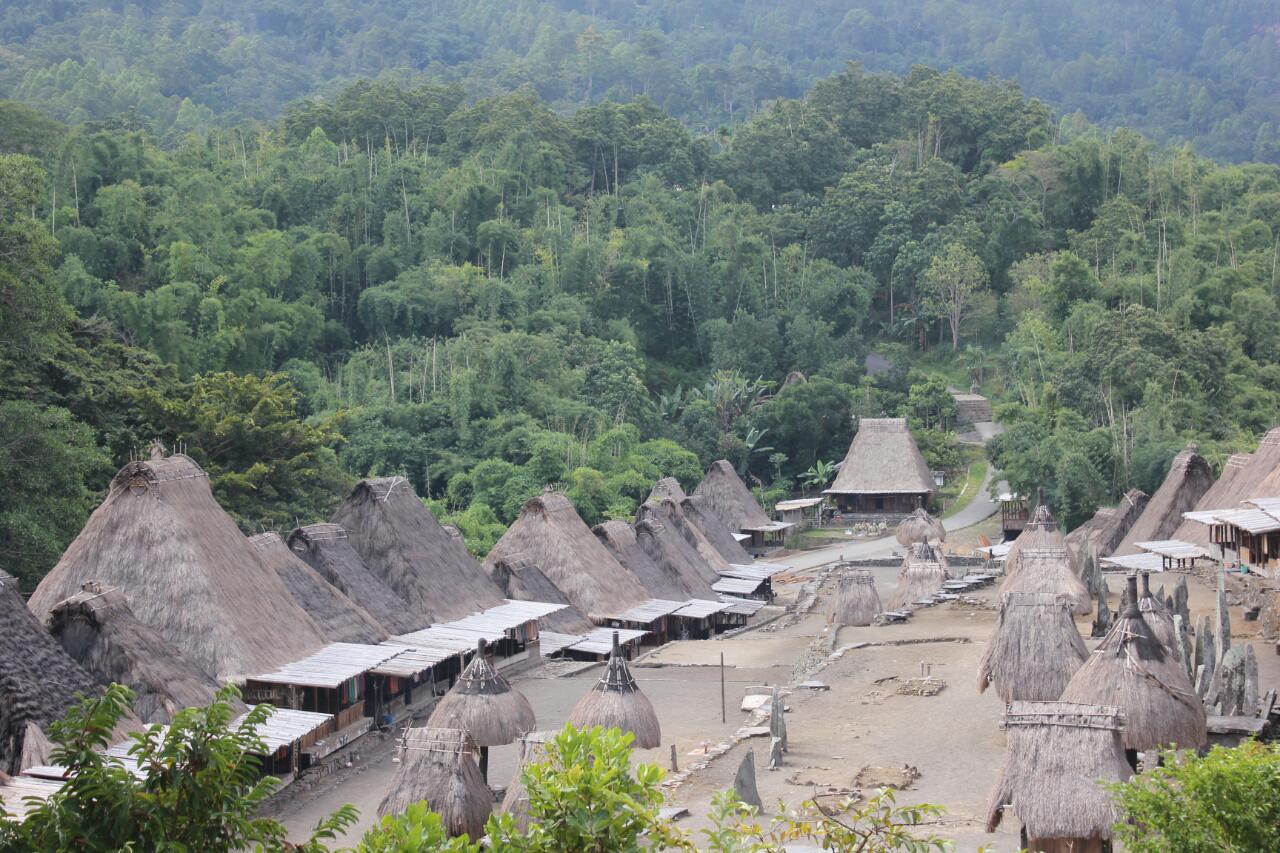 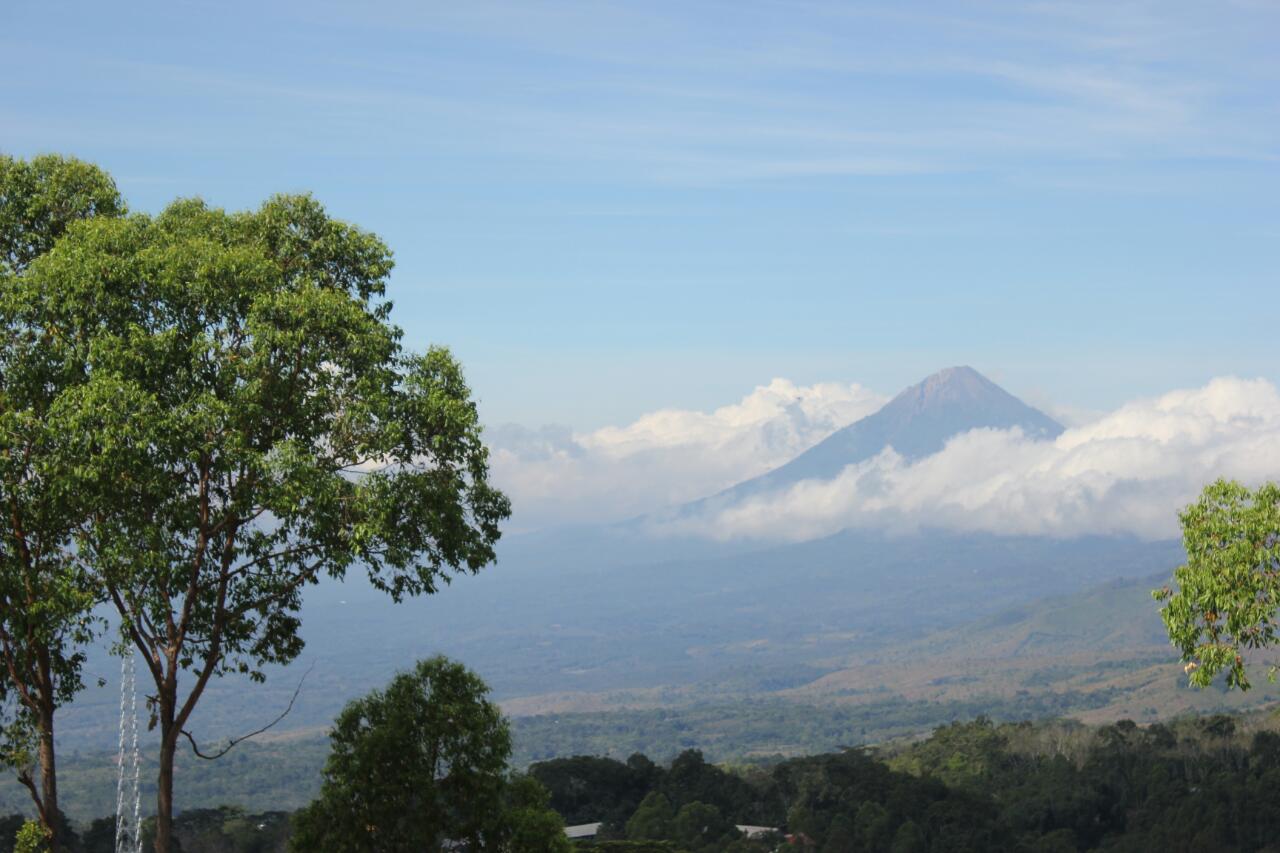 Before we left we managed to get in a great days diving & a full day of relaxing at the Atlantis beach club. The diving was pretty darn good even if the dive instructor was a bit too casual about everything. I think I’d like to go back and do a few more dives there. The beach club was absolutely paradise. We were more or less on our own there and the was an abundance of good food, yummy cocktails and funky electronic beats. We had  the most amazing views of all the islands around us and seats by the pool and on the beach, pure bliss!

I have to say that I felt somehow oldy at ease in this place. Labanbajo is a dirty, messy, ramshackle of a place more or less living of tourists coming here to dive and see the dragons, but I grew to like it and was quite sad to leave in the end.

The trip continued as is does on Flores, in a dirty dodgy look van! These little mini busses or vans basically go from east to west or the other way round across the island. The roads are windy and not for the faint hearted. Usually they bang out some random tunes at full blast, definitely bring ear plugs! The trip is definitely worth it though because once you reach Bajawa your jaw will hit the floor. Nestled in between two volcanoes, Bajawa is probably the most picturesque place I’ve seen. The views are just so unbeatable and you really have to see it to believe. We were so astonished that so few tourists make it this far, but we managed to find a little home stay in the town and settled in for the night after the long bus ride.

You really need a set of wheels to navigate the area and we hired a scooter from our home stay. The boss man was called Marcelino and turned out to be an absolute legend. He told us all the interesting places to go visit, including hot springs in the river and the traditional villages of the local tribes in the area. Jus riding around on the scooter was good fun, slowly curving your way up the mountain on these tiny little roads, there was absolutely stunning scenery everywhere you looked.

Now here’s the story of how we got invited to a local wedding. As it turned out Marcelino was going to a wedding and he said when we arrived if we stayed for a few days and were up for it, that we could come to a weeding in the village of some people he knew. As we were in no real rush, this idea tickled our fancy and we ended up staying for a few days. Marcelino said that we would drive down the mountain to the villages about 1 hour away and could come back in the night as his friend wouldn’t drink and he’d be fine to drive us back when we wanted to leave. We made it down and got introduced to all the locals. Obviously the language barrier was evident but we found  the more we drank the less that became too much of an issue, if this was a movie we’d cut straight to the scenes of my pounding drinks and then hitting the dance floor. Now as we were only westerners we were hotly sought after on the dance floor (which was actually just the dusty ground outside the house), so we were permanently being asked to dance. I decided to show the locals some of my dance moves with Steffi (cut to scenes of Patrick Swazae from Dirty Dancing). This made us firm favourites with everyone and we all had a good laugh. It was an incredible experience.

Now the night had to end somewhere and when we went looking for our driver to take us home, we found him passed out drunk in the car, this wasn’t a good sign. Marcelino had drank loads of booze and still fancied a go at the drive, but we figured it was a bit too risky to get in the car. He drove off with his drunk friend and we were looked after by the super friendly family, who showed us to a place we could sleep – a space on the ground in the bamboo house – it could have been worse! We were happy just to lay down and pray that the mosquitoes wouldn’t be too rough with us! At 6 am we got the local taxi back up the mountain and the 1 hour journey only took almost 3, as we stopped basically everywhere picking up people, animals and sack of random stuff! It was definitely a unique experience and something I won’t forget!

We continued our journey eastwards to the small village of Moni to visit the volcano with the 3 coloured lakes, which change colour. This is a bit more touristy so we saw a few more people with white faces floating around and we made a new Portuguese friend in the bus. That particular bus ride was pretty rough as the bus turned up very late and encountered so much traffic and roadblocks along the way, that the journey seemed to be never ending. We made it in the end and booked a trip to see the coloured lakes. There are people who take you up to the top for sunrise and you can walk back down. I’d really recommend that option as the views are superb on the way down and the path is a bit of an adventure – your feet and lower legs will probably be a bit stiff afterwards though!

The last part of the Flores trip was to make it to the town of Maumere, where we had booked our flight back to Bali. The town itself is fairly dirty and run down and you only really need to visit if you want to fly out off the island. I took the opportunity to get my hair cut for the equivalent of about 1€ and fix my trousers, which had suffered from my dancing at the wedding. I got stuck into my new favourite food, Indonesian pancakes and we watched a few movies on our old school TV. Then it was time to get to bed a day get out the next day to take our flight. We said goodbye to our friend David from Portugal, who had been travelling with us for a few days and then got to the tiny little airport. A nice and easy flight later and we were on Bali once again.

I really enjoyed the time on Flores and would warmly recommend the island to anyone looking to see some nature and sample the real Indonesian culture and friendliness. There are cool things to do and although it’s a bit of an effort to get around, it’s well worth it to go now before it becomes too overrun with tourists.

We basically just relaxed for a few days in our nice hotel on Bali and then got our flight to Perth, where the next leg of the adventure was waiting for us! G’day mate. 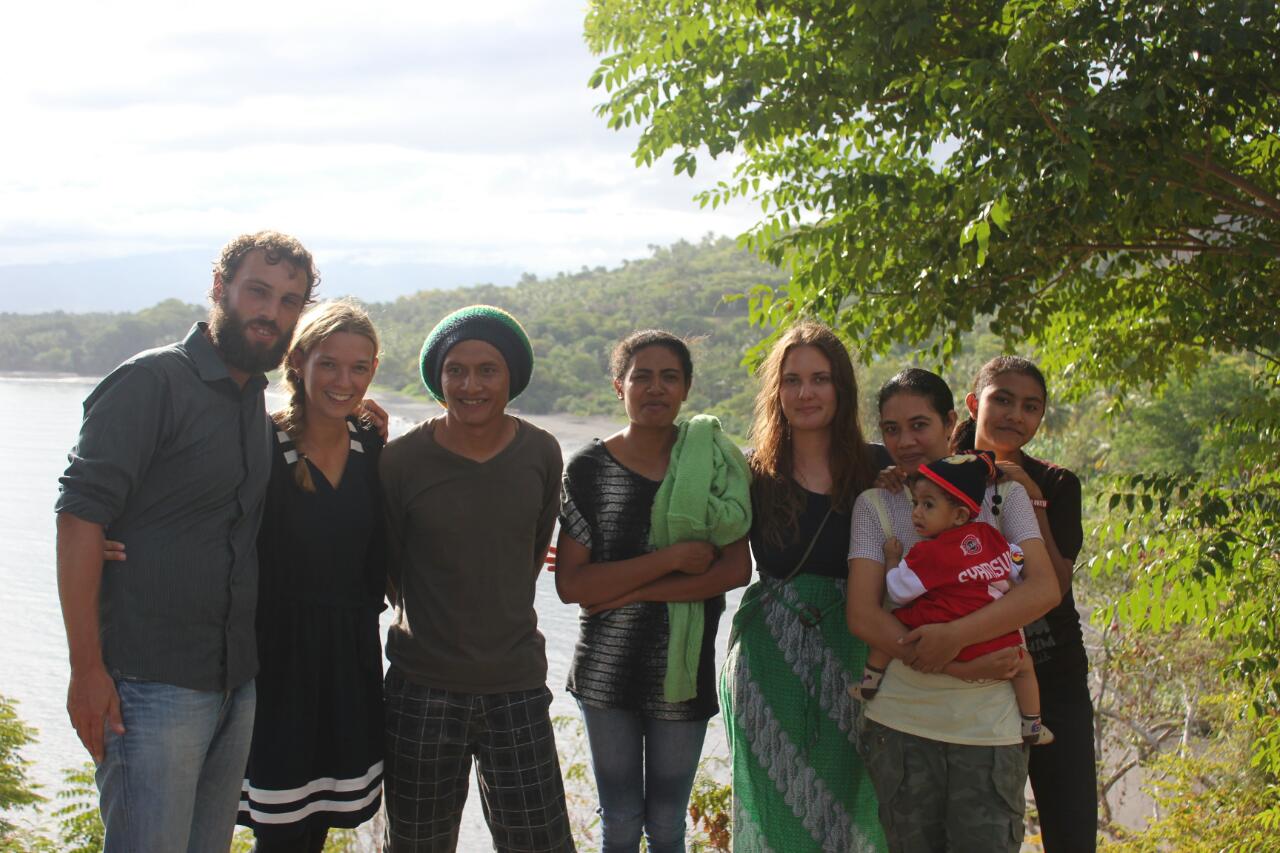 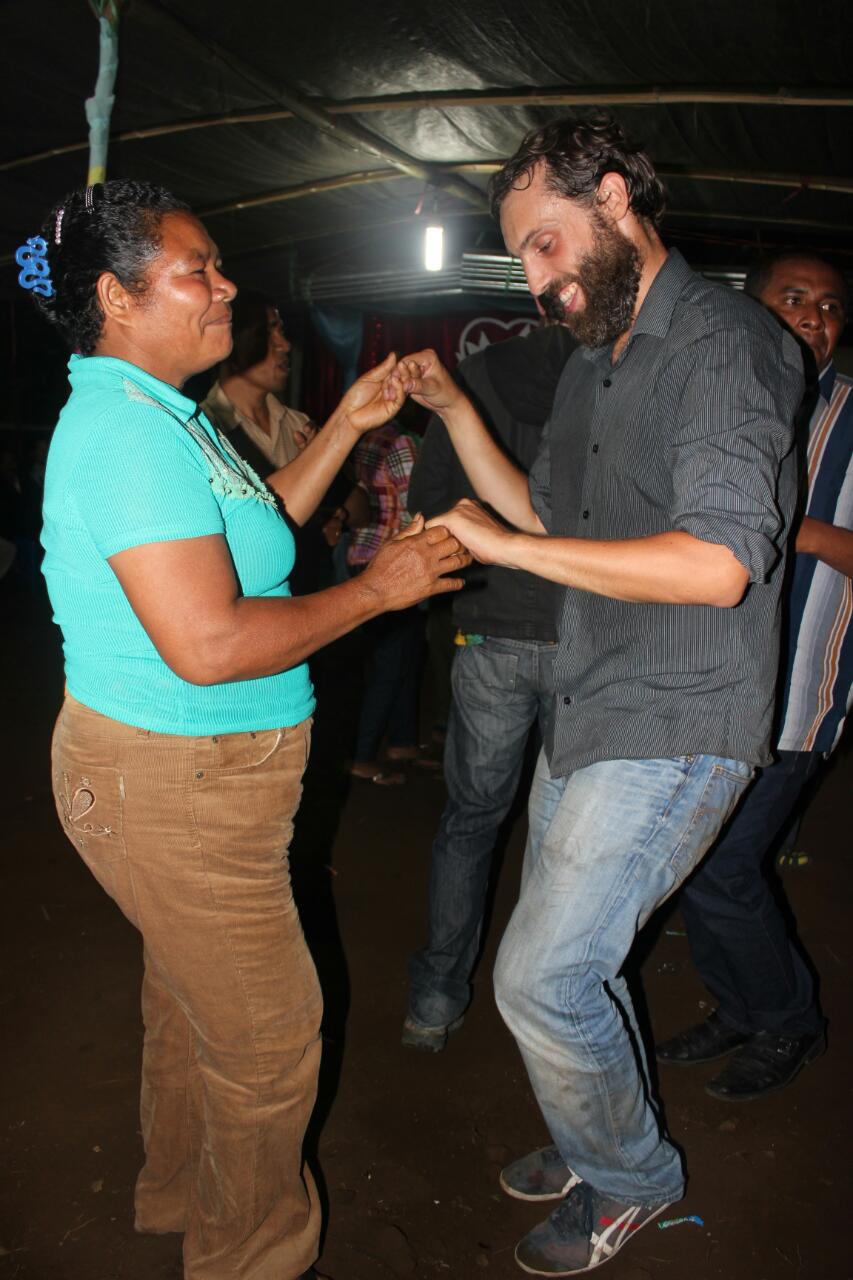 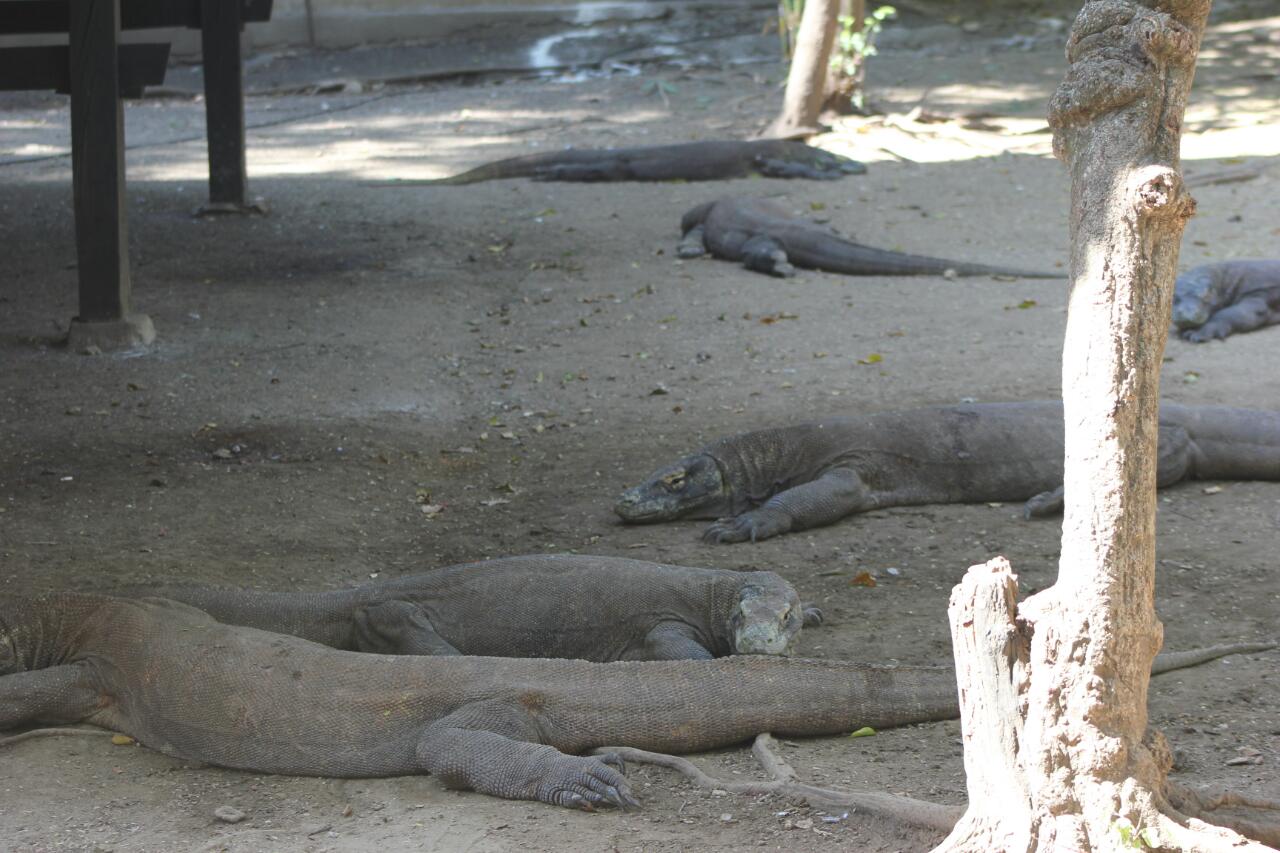 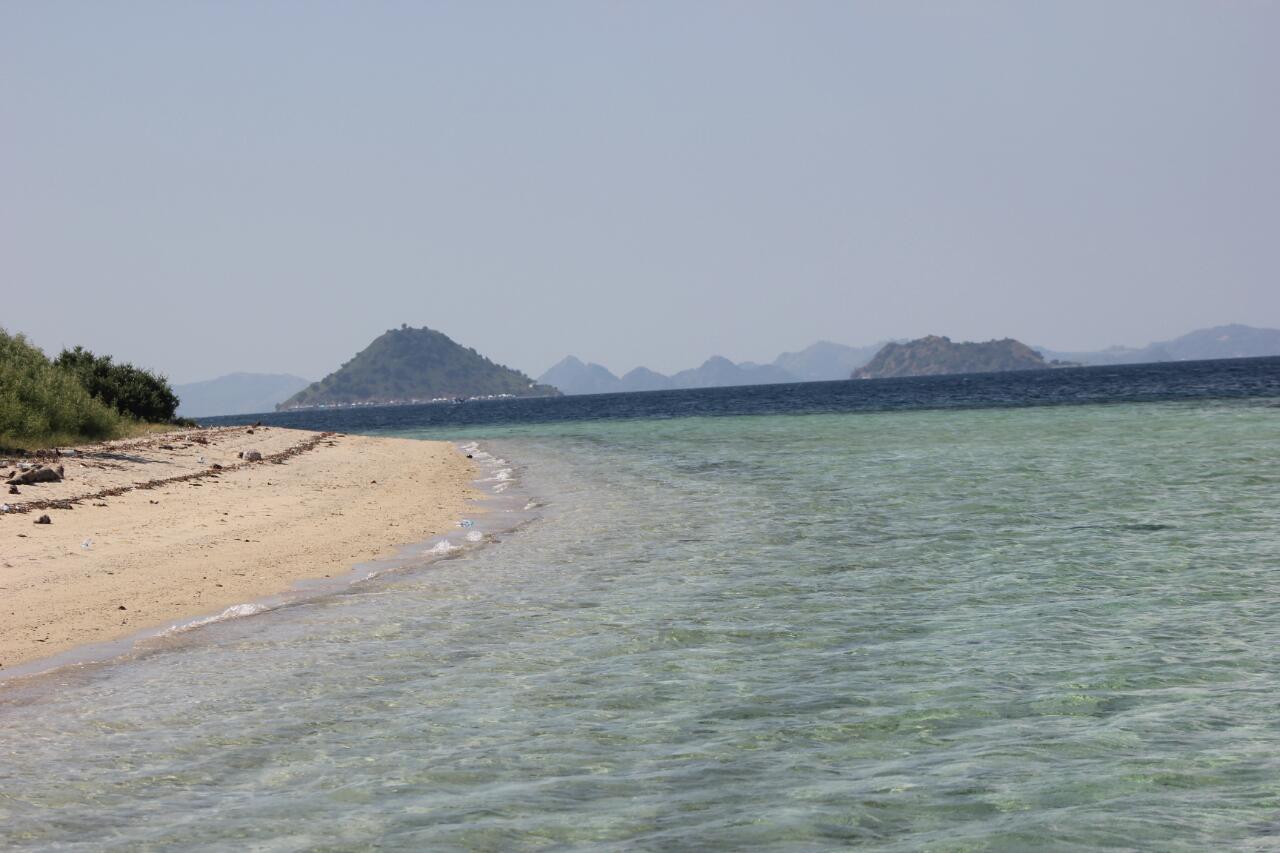 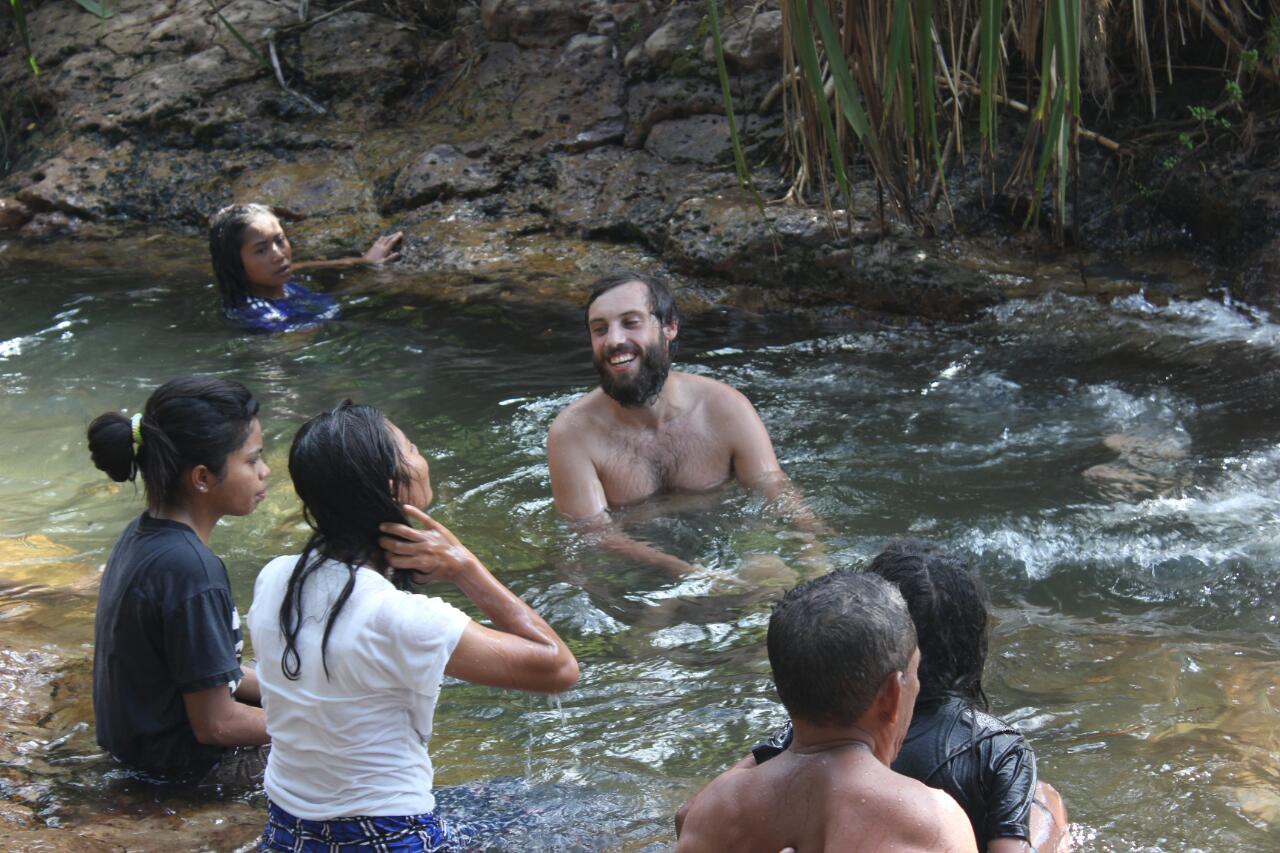 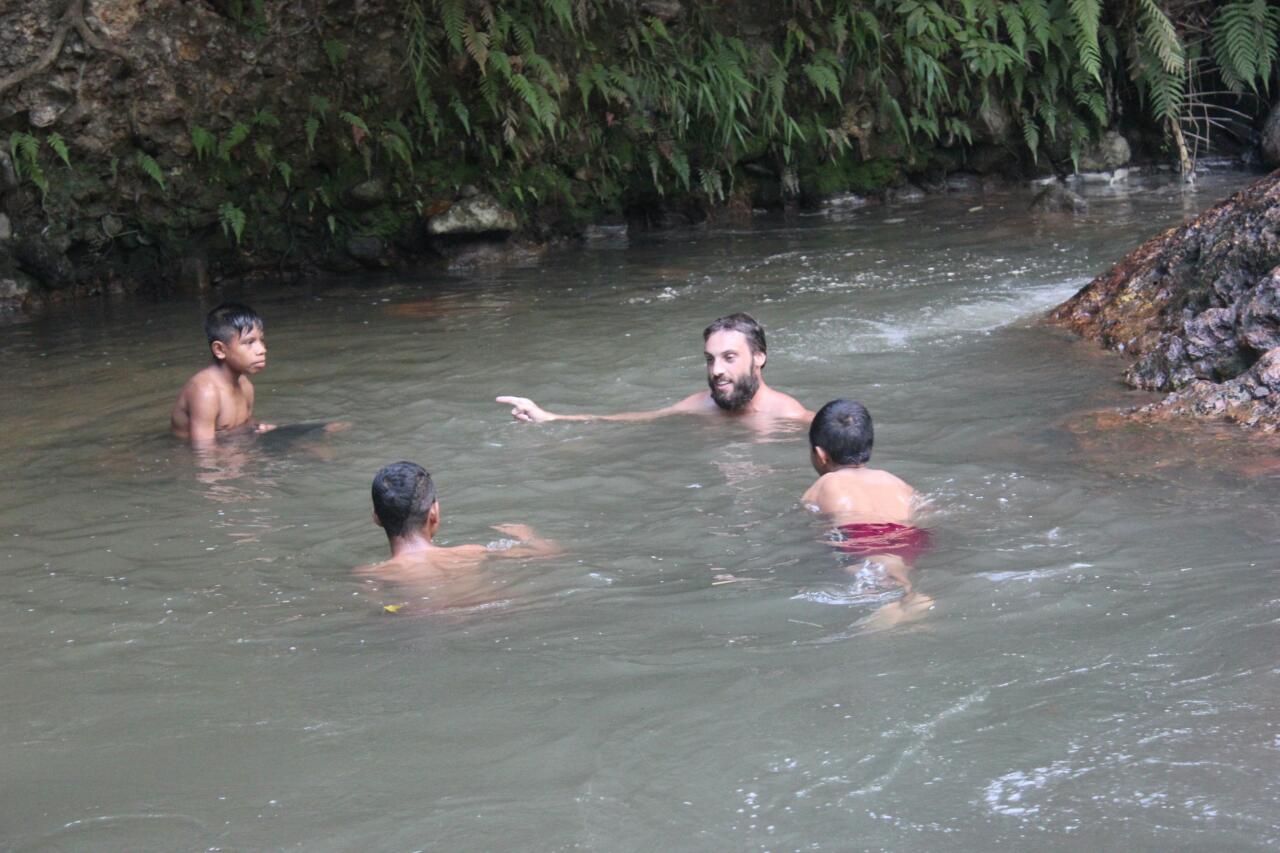