Flying from KL to KK was cheap and easy and gave me a taste for getting across large distances by using cheap flights. In comparison to Europe where Ryanair and Easyjet are budget carriers but somehow you end up paying hundreds of Euros to fly with them, Asia offers some seriously competitive prices to get you from one place to the next. Using sites like Skyscanner can be helpful, but in my experience it’s always advisable to check directly with the company website just in case there is a special promotion price on offer. Touching down in Kota Kinabalu I really go the sense that Borneo was going to rock – the wilds of the jungle awaited!

After the crazy humidity of KL it was a nice change to be able to enjoy a light sea breeze in KK. We checked into our hostel, which was extremely basic and quite overpriced and then went out to get some food. The city itself is quite compact and you can stroll around easily. The waterfront is quite nice and that is where the action  is in the evening. Lots of people hang out there to sample the fresh seafood at the night market or just enjoy the hustle and bustle.

We visited the cinema 3 times whilst in KK and it was really nice to sit back and enjoy some sort of home comforts. KK is filled with shopping malls and is somehow trying to be the USA in some ways, but now and again it’s nice to be able to get some western products. Each mall seems to have its own cinema on top so we had some excellent choices. For around €3 you can see a flick and enjoy some nice air conditioning! We watched the “avengers” movie, Danny collins” and” good kill”. All good movies in their own special way.

But I wasn’t in Borneo just to watch movies, I could feel the jungle calling me from afar. We sorted out a bus from KK to the orangutan sanctuary in Sipilock on the eastern part of Borneo, but before leaving KK we managed to do a day of scuba diving, which was partly great and partly rubbish due to poor visibility and our guide getting lost for 15 mins, he needs to brush up on his underwater navigation skills. We didn’t want to go the whole hog and pay the crazy prices for the “world class” diving in Semporna so a few fun dives in KK would have to suffice. We struck gold with our bus trip as we had a nice new bus and a couple of movies in English to help break up the 6 hour journey. We passed by the amazing sight of Mount Kinabalu, which is a climb I would like to do in the future for sure. By the time we go to Sipilock it was too late to go to the rainforest discovery centre or visit the orangutan sanctuary so we just went for a stroll in the area and soaked up the forest! 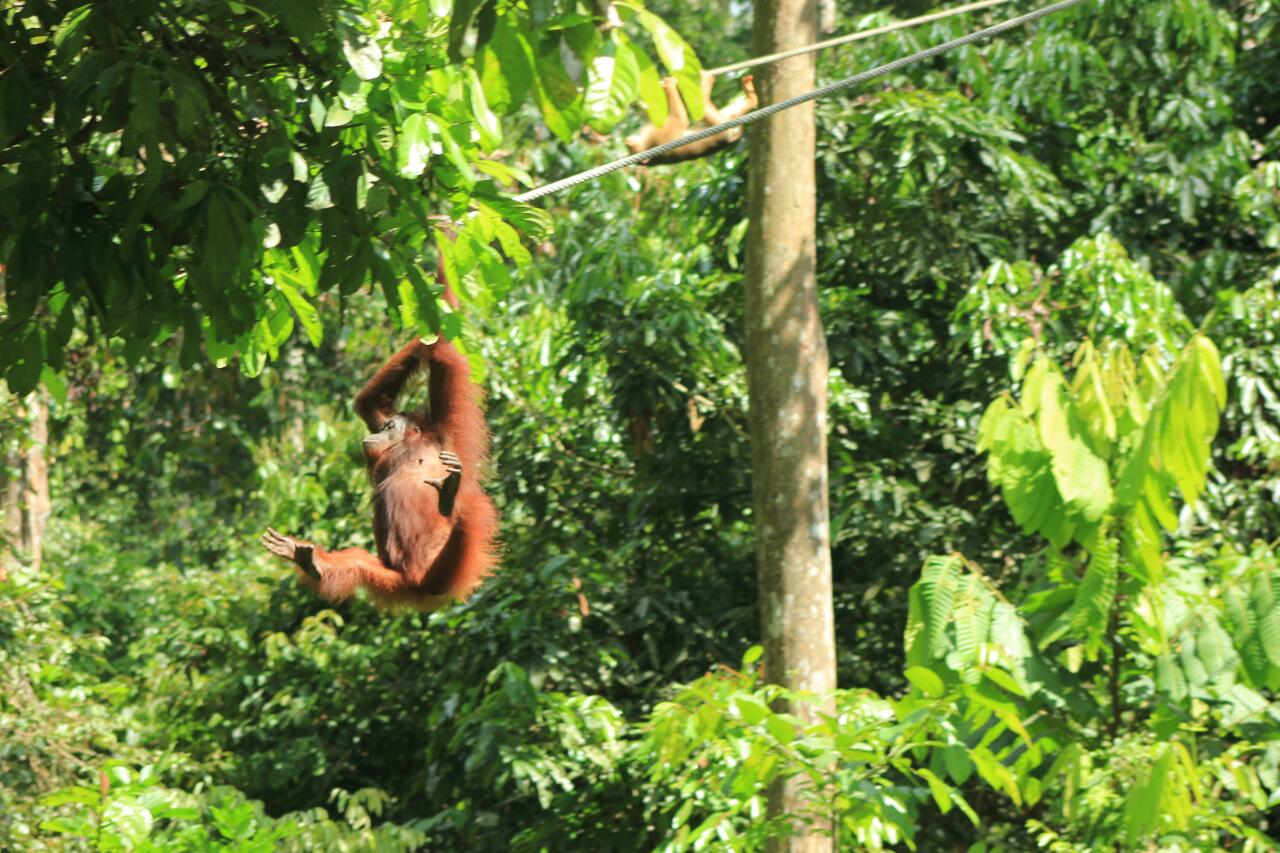 The man of the jungle 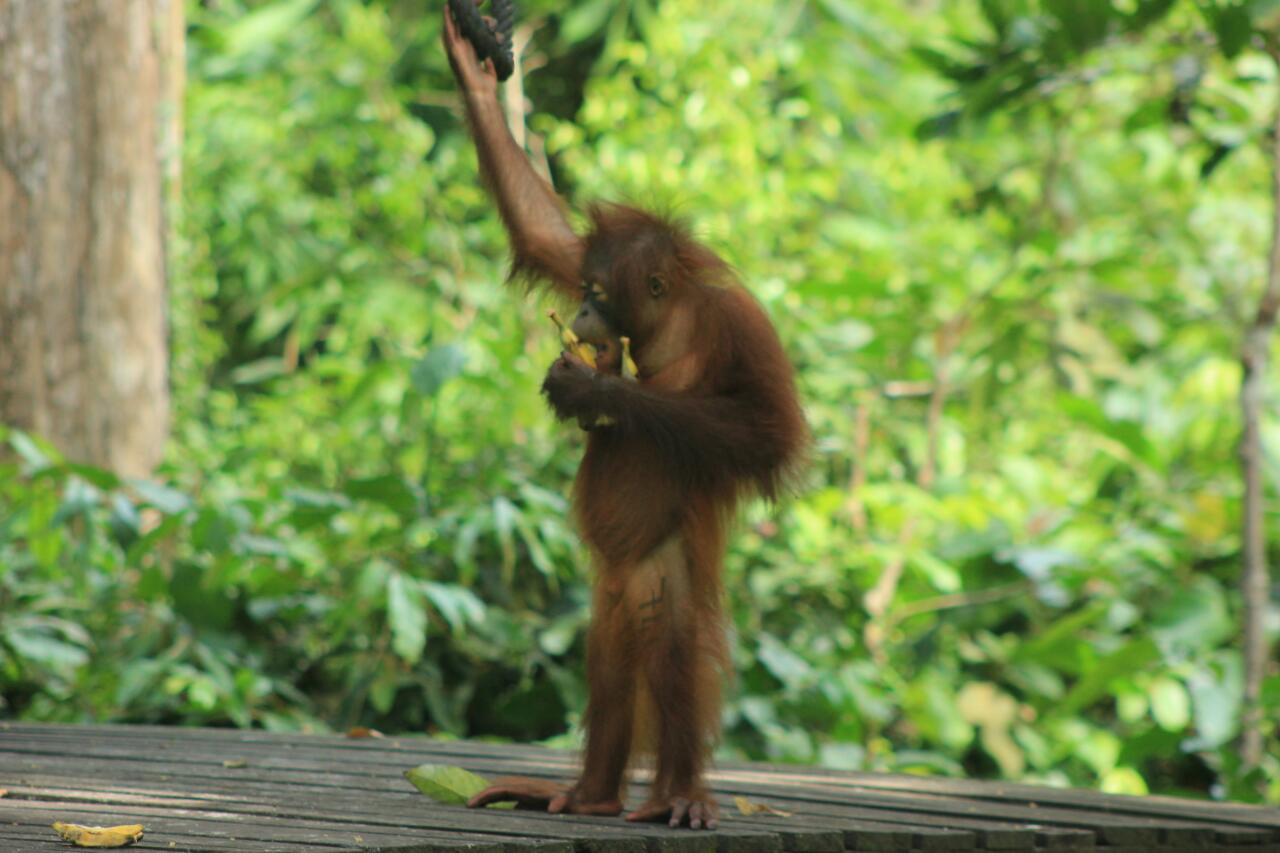 When people talk about Borneo you immediately think of jungle and wildlife, but the shocking truth is that there is basically no more jungle and the wildlife is being constantly pushed to the brink. The natural habitat of the monkeys, orangutans and birds is in fact being eroded by palm oil plantations, which are bloody everywhere. Endless natural forests have been chopped down solely for these plantations, which are basically a big money business in the area. In some countries logging is a massive problem, but here in Borneo they are so far past this stage and rows upon rows of palm oil trees stretch for literally as far as the eye can see. Those advertising campaigns from the WWF (these days nothing to do with wrestling) actuality make sense and really hit home when you look around in Borneo, deeply disturbing to see first hand. 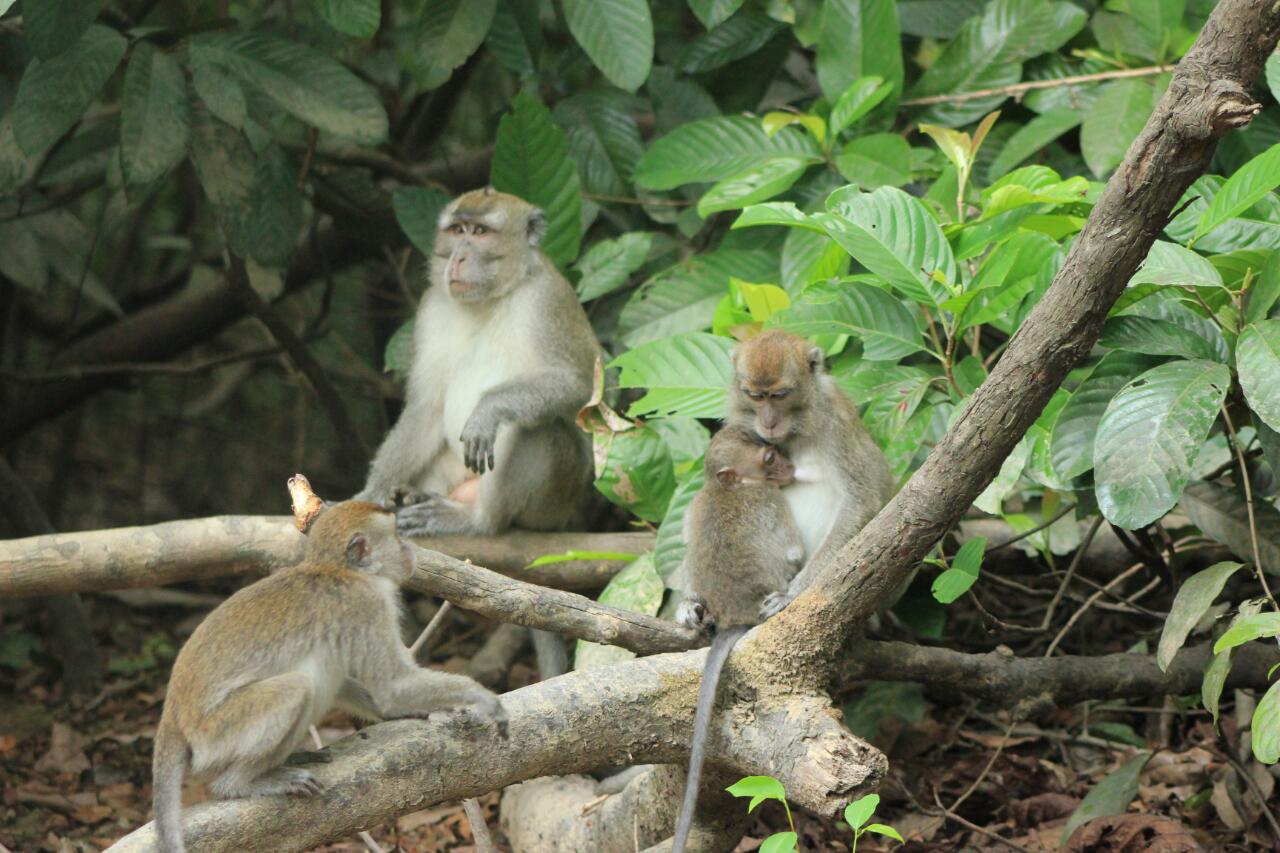 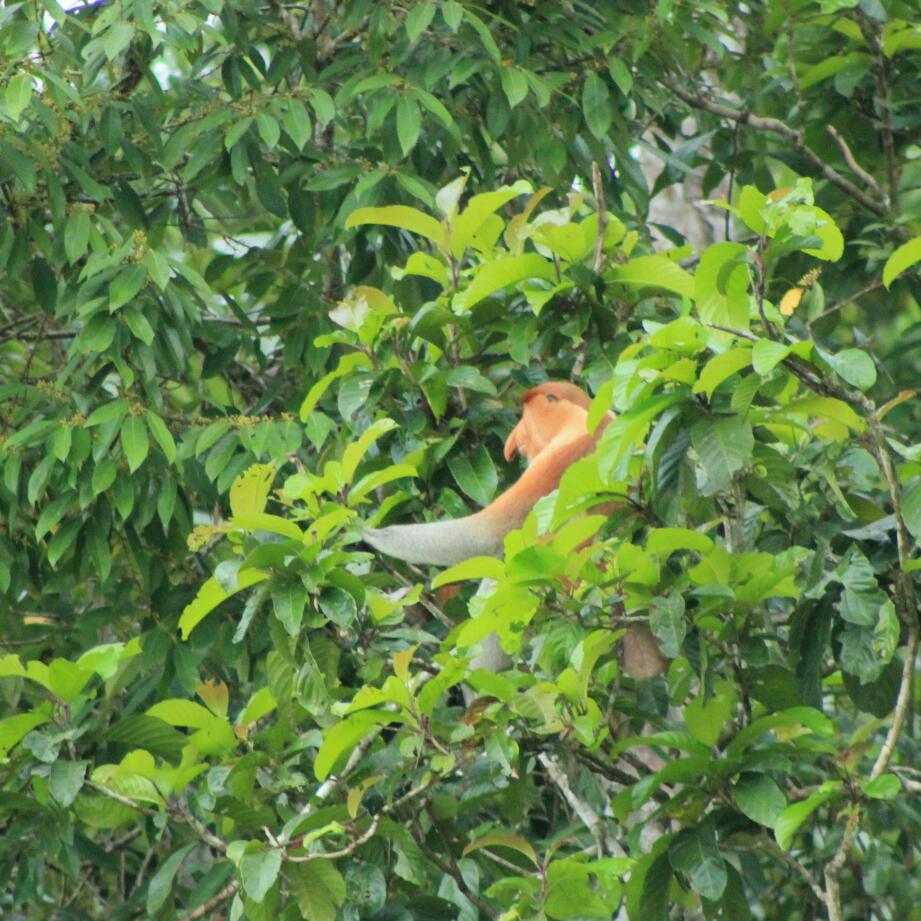 Yes that is his nose! The bigger the nose the better the lover supposedly 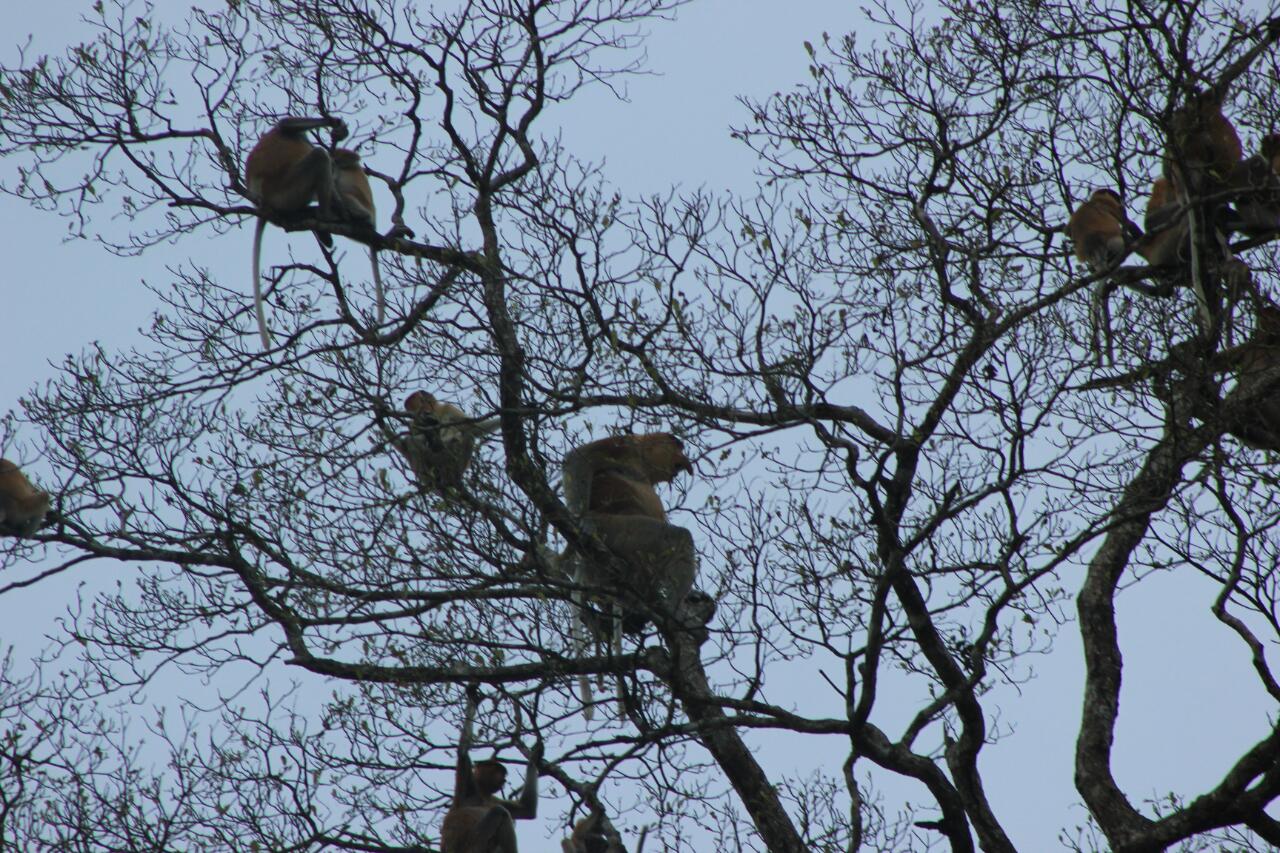 We visited the sanctuary and it was cool to see the primates swinging through the trees, such beautiful creatures and so close to humans when you look at their expressions and movements. We visited at the morning feeding time so there were a few other people there too, nevertheless it was a very cool experience indeed. Some cheeky little monkeys were there too and they kept stealing the food that was meant for the orangutans. It was quite funny to watch the monkeys trying to avoid being seen by the man with the food basket, in some ways a bit like a bad pantomime – “he’s behind you!”

To actually see some wildlife in the wild you have to take a river cruise and stay in a jungle lodge, which we of course did. The tour involves 4 boat rides in speed boats up and down a river which runs through one of the remaining pieces of jungle in Borneo. 2 rides are in the early morning at 6 am and 2 rides are in the afternoon around 4 pm.  These are the times where the animals come to the river banks to sleep or take shelter. High up in the trees we saw proboscis monkeys and silver leaf monkeys. Macacs can be found everywhere and they are a bit of a plague to be honest. We also saw some fairly big snakes including cobras and some smaller snakes curled up in the trees. A highlight were the enormous crocodiles in the morning rides. One of which was between 4 and 5 metres long, a serious monster! We also saw amazing birds native to the area including kingfishers and hornbills. On one of the evenings we went on a night walk and managed to see a mouse deer, which was really cool. We also saw some colourful sleeping birds! 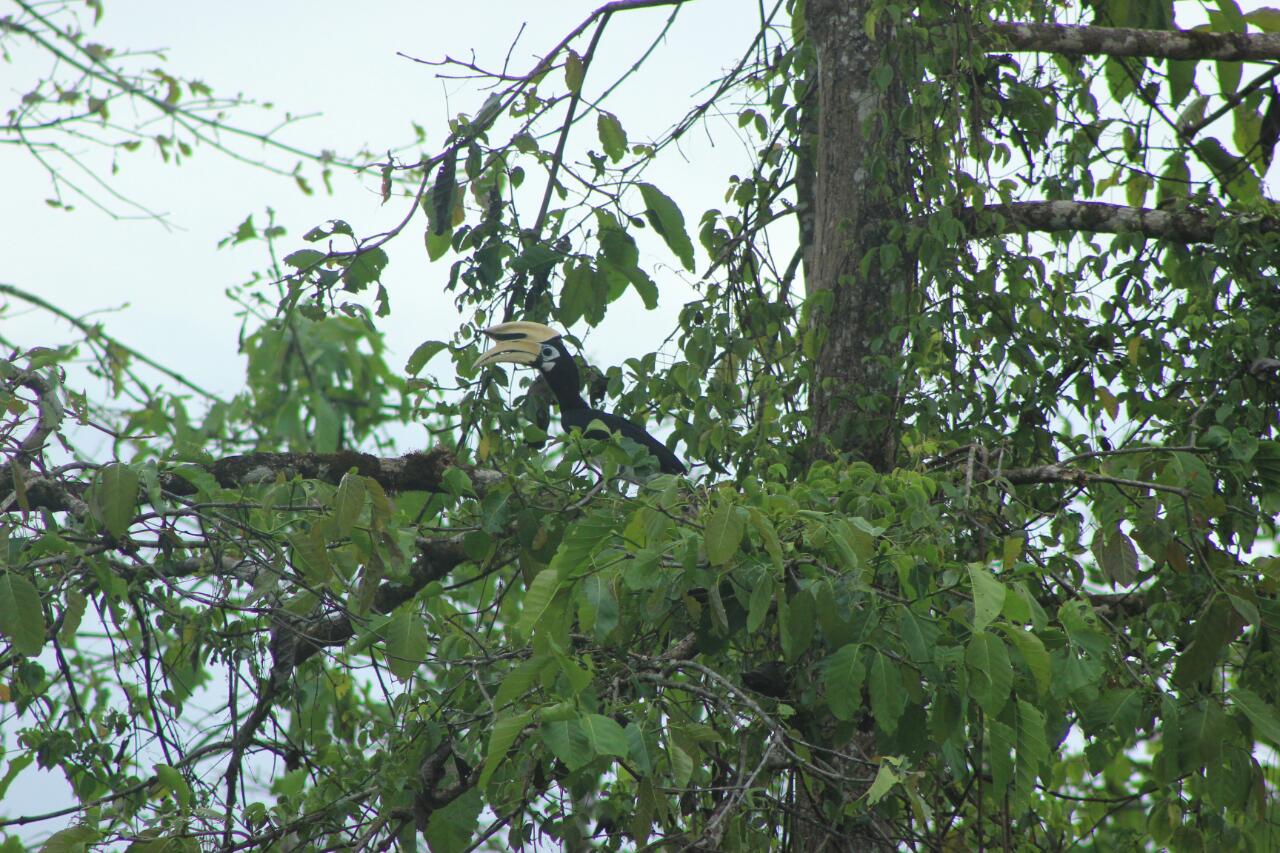 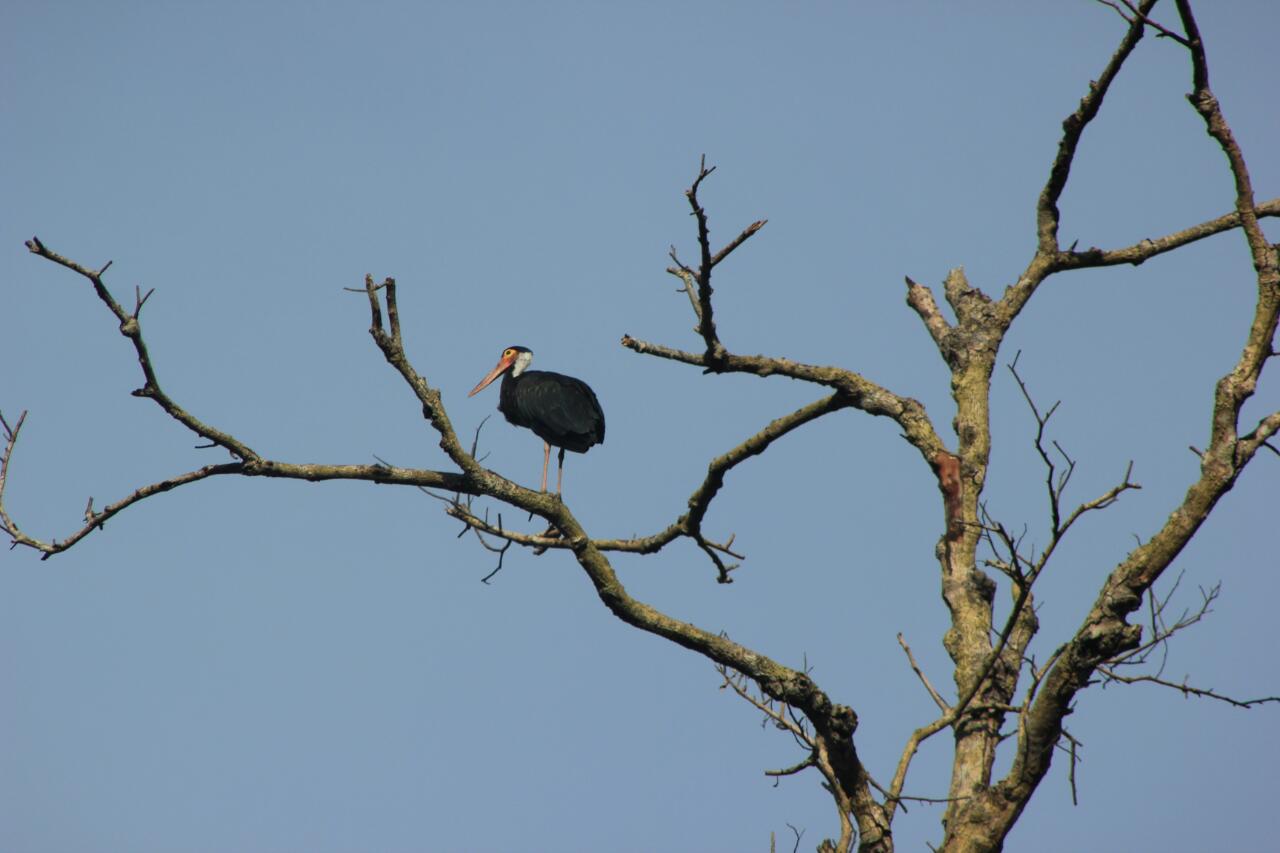 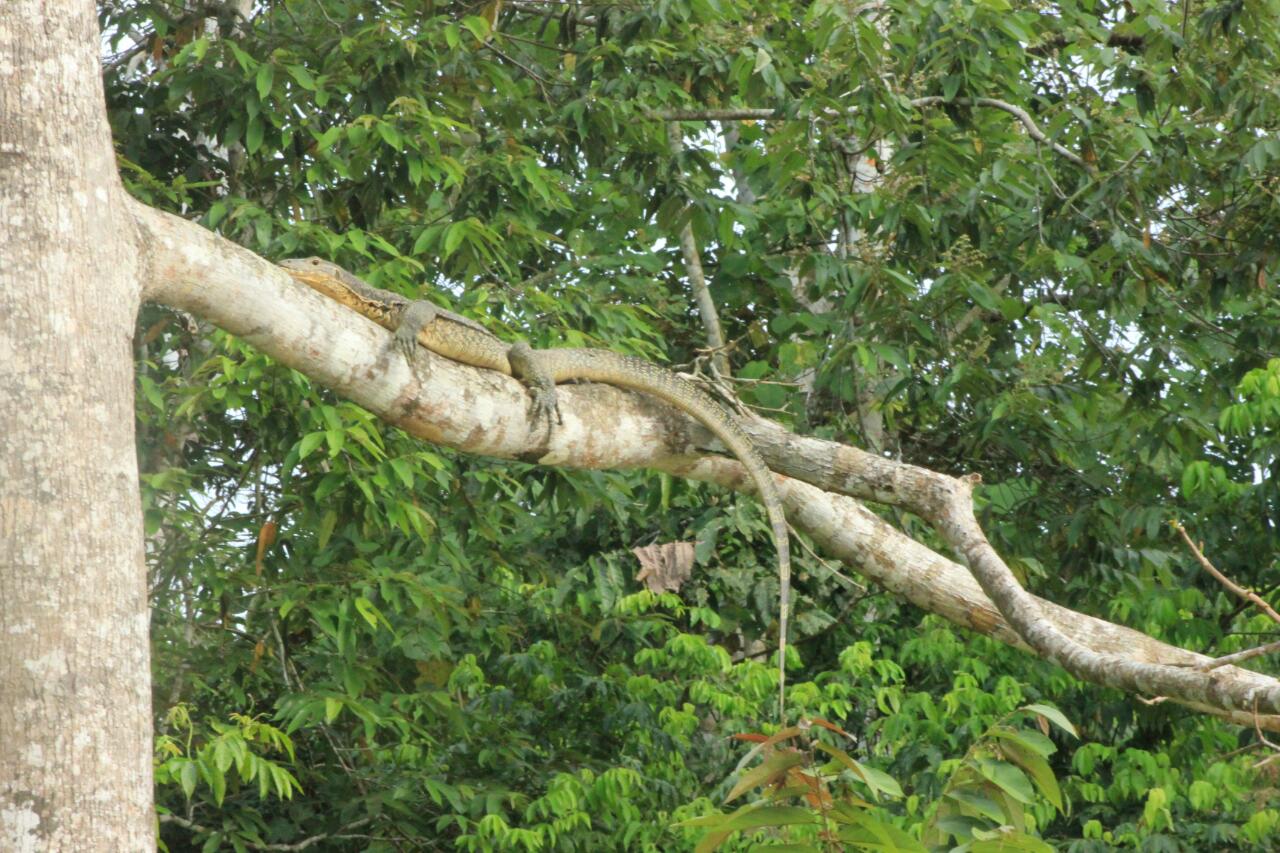 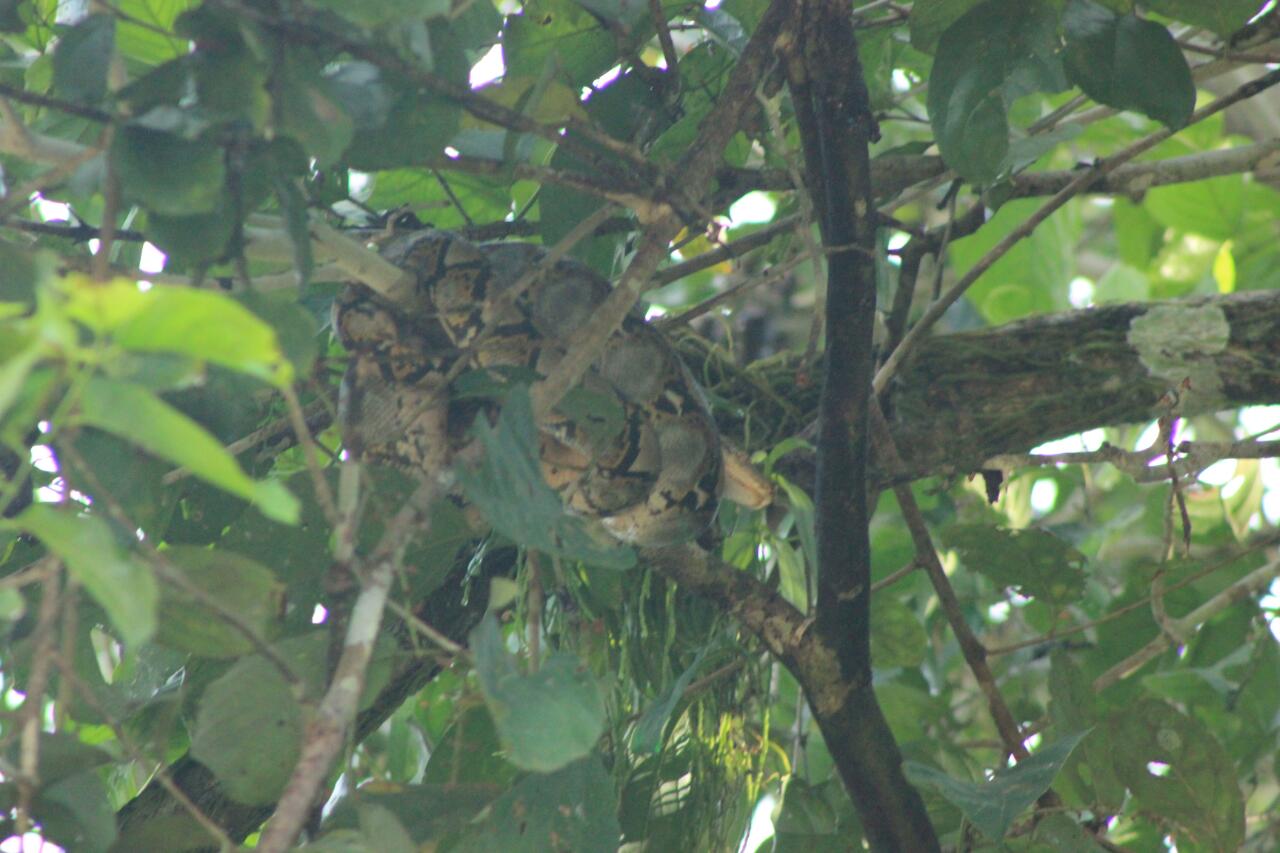 A big curled up python 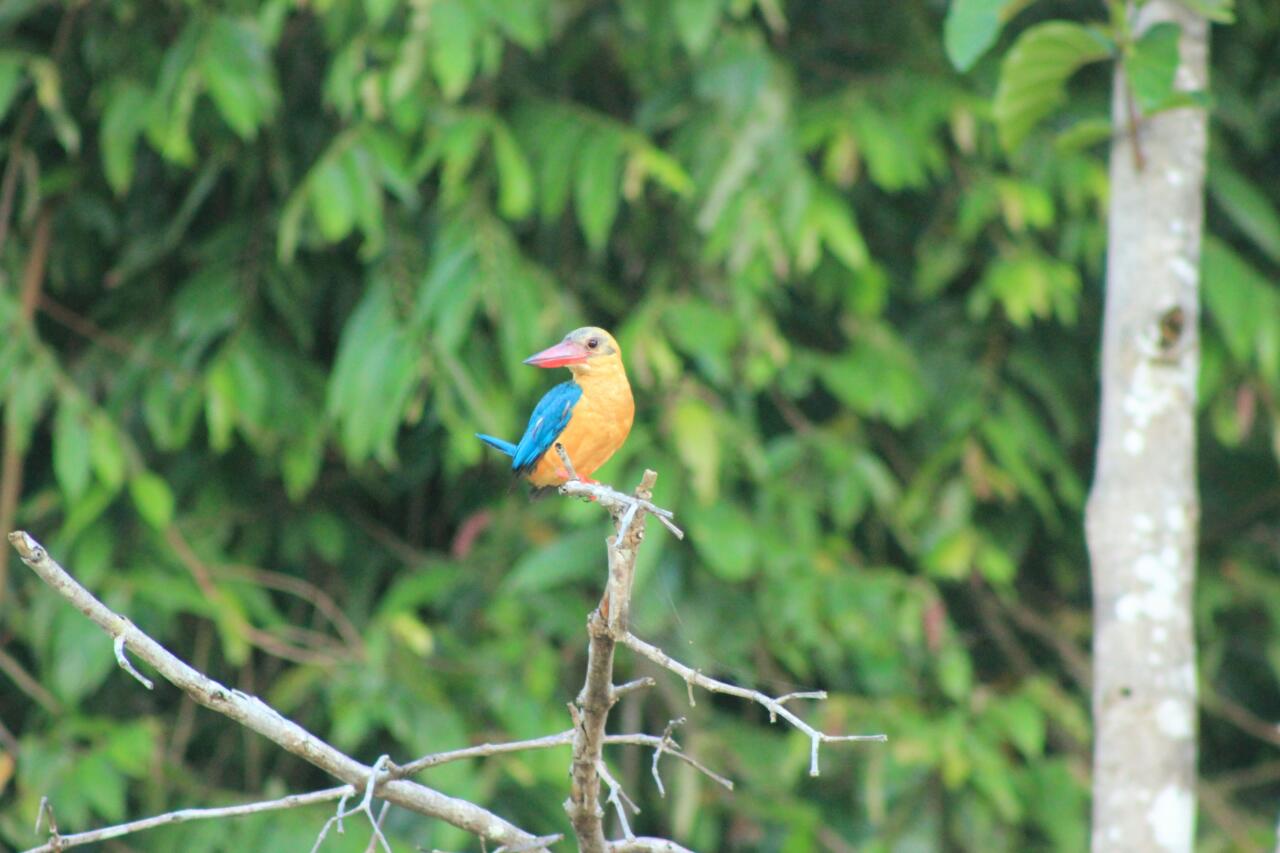 After our jungle experiences it was time to return to KK and plan the next leg of our journey. We shared a cab from the bus station to the city centre with an American couple who gave us the great tip of flying directly from KK to Bali…..for only 40$……bargin! With that flight booked for the following day we were able to relax in KK for the evening and splurge on some tasty food and drinks! An afternoon flight the next day gave us the chance to catch the Avengers movie on the day of its release, then a quick bus ride to the airport and then it was auf wiedersehen Malaysia, you really are the true heart of Asia!

Malaysia really turned out to be a hidden gem on the trip so far. A country full of diversity and multiple faces is definitely worth a visit. From amazing food, to dense jungles to wonderful Highlands right down to super friendly people, Malaysia is a country you should put on your bucket list.

Up close and personal