After a really good bus journey from Laos we arrived at 6 am in central Bangkok. Basically backpacker central Koh San road. (My Irish friends who had visited Bangkok some years earlier sarcastically referred to this place as a little known, quiet cul de sac) This is where foreigners come to party and go wild. At 6 am the streets were empty and the guesthouses full. This presented a slight problem for us as we were quite tired and having been on the super laid back islands for 5 or 6 days, we’d forgotten how to deal with big city life.

As we wandered from place to place we became more and more frustrated, but there was light at the end of the tunnel. A heavily inebriated guy from Finland, who had been sat on the kerb rustled from his slumber status to come to our aid. He looked like he had been partying quite hard and should have really called it a night hours ago. He somehow mumbled a question along the lines of “where are you going?” and then took us to where he was staying which was according to him “cheap and clean”. Both those being keywords that I’d type into GoogleBackpacker! He then proceeded to talk quite loudly to/at the hotel staff and in seconds he’d organised us a room for 10$/300 baht, which we could check into right away. A legend of a man. He then disappeared and returned back to his Burger King cup on the side of the street.

After 4 hours decent sleep we got up and got out and about to see the city and visit the sights. Here is where things went a bit wayward for a couple of days. If you don’t like the sound of my sob story then skip this part!

Scamgate and how I came to dislike Bangkok
At the time I was really angry about the whole situation and how events had unfolded, but after some good advice from my Donegal support group I managed to take a deep breath and reevaluate things and get the trip back on course. Since we’d had such great experiences in Vietnam and Laos we’d become so trusting when people would speak to us randomly or try and help us. Just remember what happened in Phong Nha that one night. That’s part of the reason that we were so happy when a man sitting reading the paper and eating a snack smiled and said hello to us. Obviously recognising us as tourists he said welcome to Bangkok and asked us the usual questions like; where are you from, how long are you in Bangkok etc. After a lovely chat with him he took a piece of paper and roughly drew us a schedule of what we should try and do in a typical day in Bangkok. He the said we should try and organise a tuk tuk to take us around the city for the day and it shouldn’t cost more than 40 baht. His last words of wisdom were to make sure and always take the tuk tuks with yellow number plates and black writing. Off we went like Dorothee along the yellow brick road, practically skipping and feeling happy that we’d met such a nice man.

50 meters around the corner we saw a few tuk tuk drivers hanging around as they do. One of they was waving and pointing at his number plate and confirming that it was yellow and an official tuk tuk from the government, as our previous friend had told us. Bingo bango bongo, result. Our friendly tuk tuk man asked where we wanted to go and then we showed him the ready made map we had received. 40 baht was agreed and off we went to a series of (ever diminishing in importance) sights around the city. This is where the scam became more complex. Upon reaching the 3rd temple/Buddha/Wat we met another man praying in the temple. He then gestured to us to also pray and then afterwards started chatting to us and the usual chit chat ensued. He even gave us a tip or two if we were interested in getting a suit made or a dress that there was an amazing offer only today at all the export tailor shops. We kind of nodded and congratulated him on getting such a good bargin, he’d supposedly bought a tailor made suit for around €300 not really a bargain at all, but good luck to ya mister! After another Buddha statue we stopped off at the aforementioned tailors, more to keep the tuk tuk man happy than anything else. Greeted by a dude saying “conas ata tu”, irish for how are you, I felt right at home 😉 We made our excuses and said suits weren’t the thing for us.

At the next temple we bumped into another friendly man and he had just come from the travel agency and had booked a trip for his brother as it was Buddha day. This was also something our tuk tuk man had briefly mentioned in relation to his good fortune on this day, special government subsidies for petrol today etc. Now you may be thinking that I should had considered that all this was just to good to be true, but in the situation I was actually thinking that all these people, independently of one another had been giving us good advice and it kind of reinforced parts of the story….coming to the climax of our visit to the “government tourist office” T.I.T. (this is fake, it’s actually T.A.T) [lots of other puns and jokes could be made here] To cut the story a bit shorter, I was all for booking the tour with the agency and Steffi was against. After a brief heated discussion we booked a less pricey package than first quoted and had train, hotel and excursions sorted for our proposed trip to Chang Mai in northern Thailand. $350 and some hours later we’d booked a trip and then later researched the company…..The title of the piece was “Buddha day scam”. That made for grim reading as it basically listed out our entire day. After some anger we consigned ourselves to the fact the money was gone and that was that.

Back to normal Blog service
So on day two in Bangkok we had to be very productive and get the visa for Myanmar sorted. That was a whole day affair in the end and my advice to anyone in the future would be to get the visa on arrival if you fly to Yangon. It would have only cost a little more but saved us a day at the embassy. That’s life! Steffi had 2 friends coming from Germany to spend 3 weeks in Thailand and they had arrived during the time we were at the embassy. We took a boat taxi on the river in Bangkok and met them at the hotel. It was really nice to see some friendly faces and to have a nice evening out and about with them. It was also cool to hear their first thoughts on Thailand and get their perspective on things. One good example was the hotel. For convenience and also as a little treat we’d booked into the same hotel as our friends. For us it was absolute luxury, with clean sheets, hot water, speedy wifi and 24/7 security and reception. For one night it cost $35, which was such a hike in comparison to what we’d previously been paying, $10 per night. For the guys straight out of Germany it was a bog standard run of the mill budget hotel. In any case we were all happy to be together and to kick back with a beer. After a day at the embassy it was just what the doctor ordered.

We also spent a day sightseeing in Bangkok, the proper sights this time and quite enjoyed ourselves. We had a late night train to Chang Mai so we spent basically the full day wandering around and exploring the city on foot. Then it was off to the train station.

[PS.  We also spent a day in Bangkok after coming back from Chang Mai, but we barely left the hotel as we had an early start to the airport to catch our flight to Yangon. The hotel was a bit out of the centre, but ideally located for the airport. It was really nice to just watch movies on TV and swim in the surprisingly nice hotel pool!] 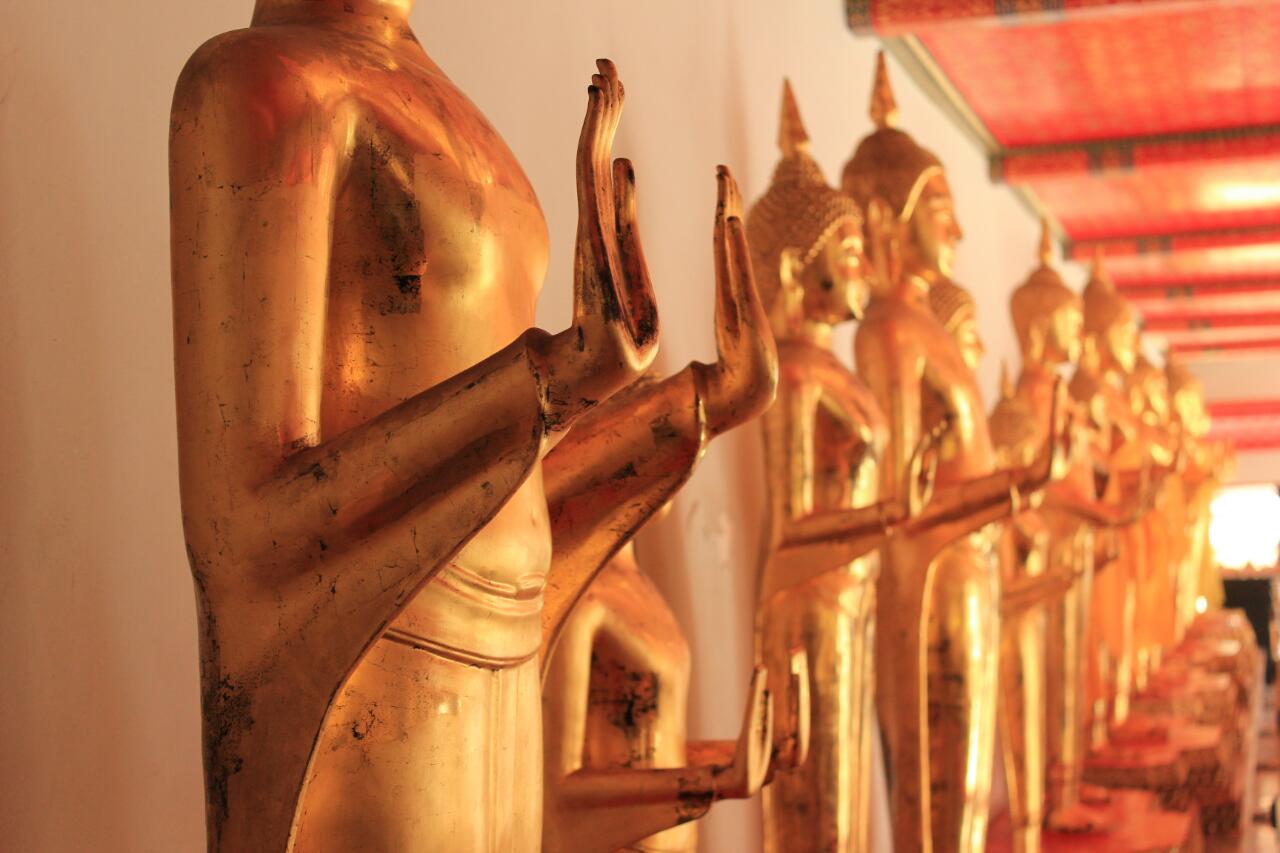 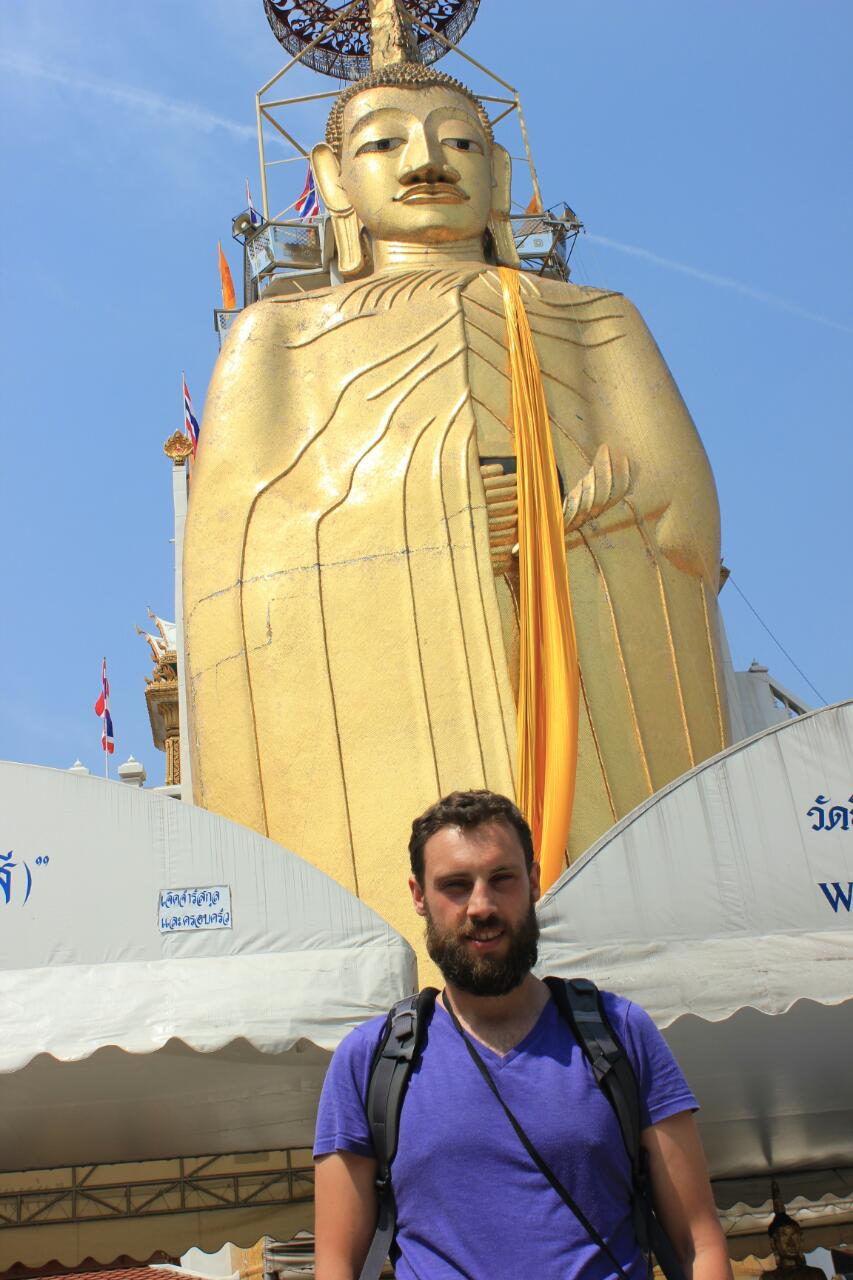 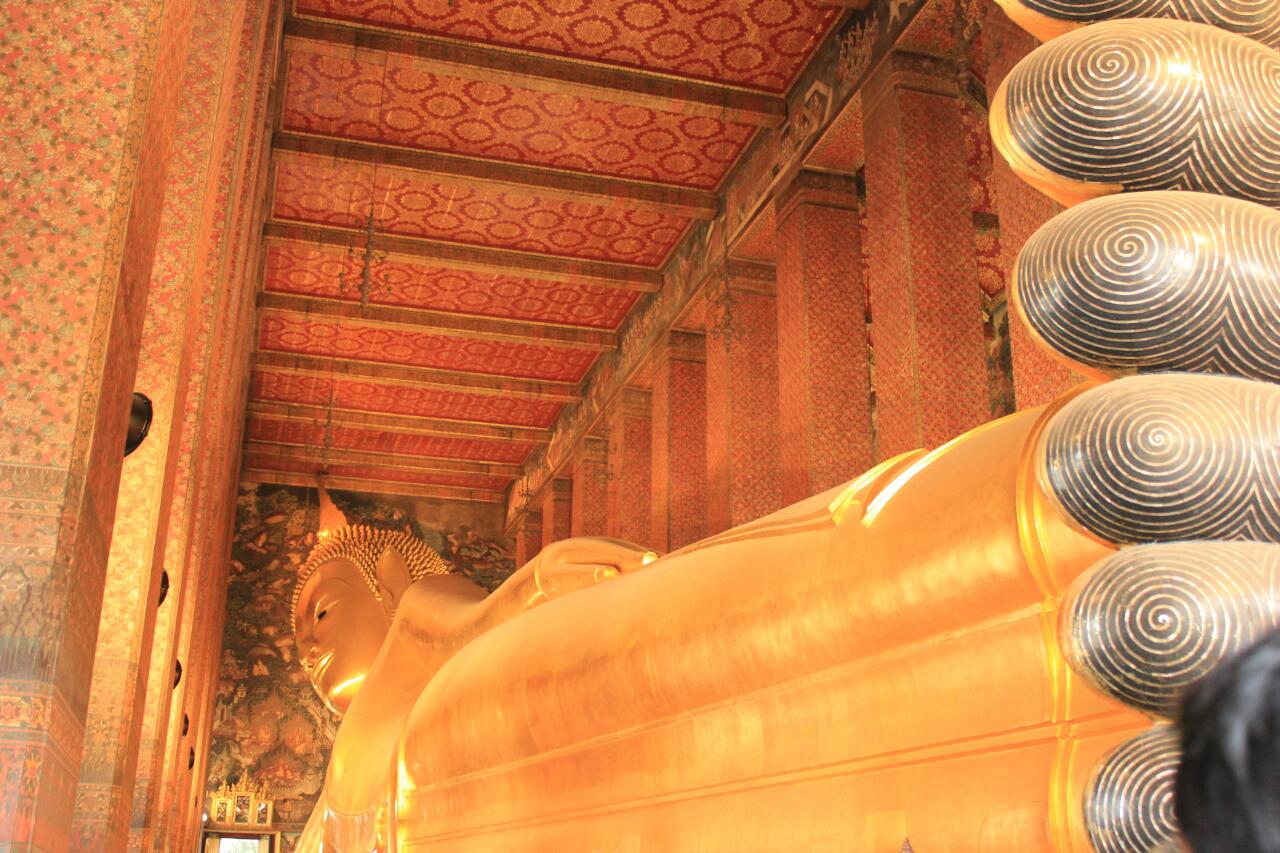 Buddha having a rest 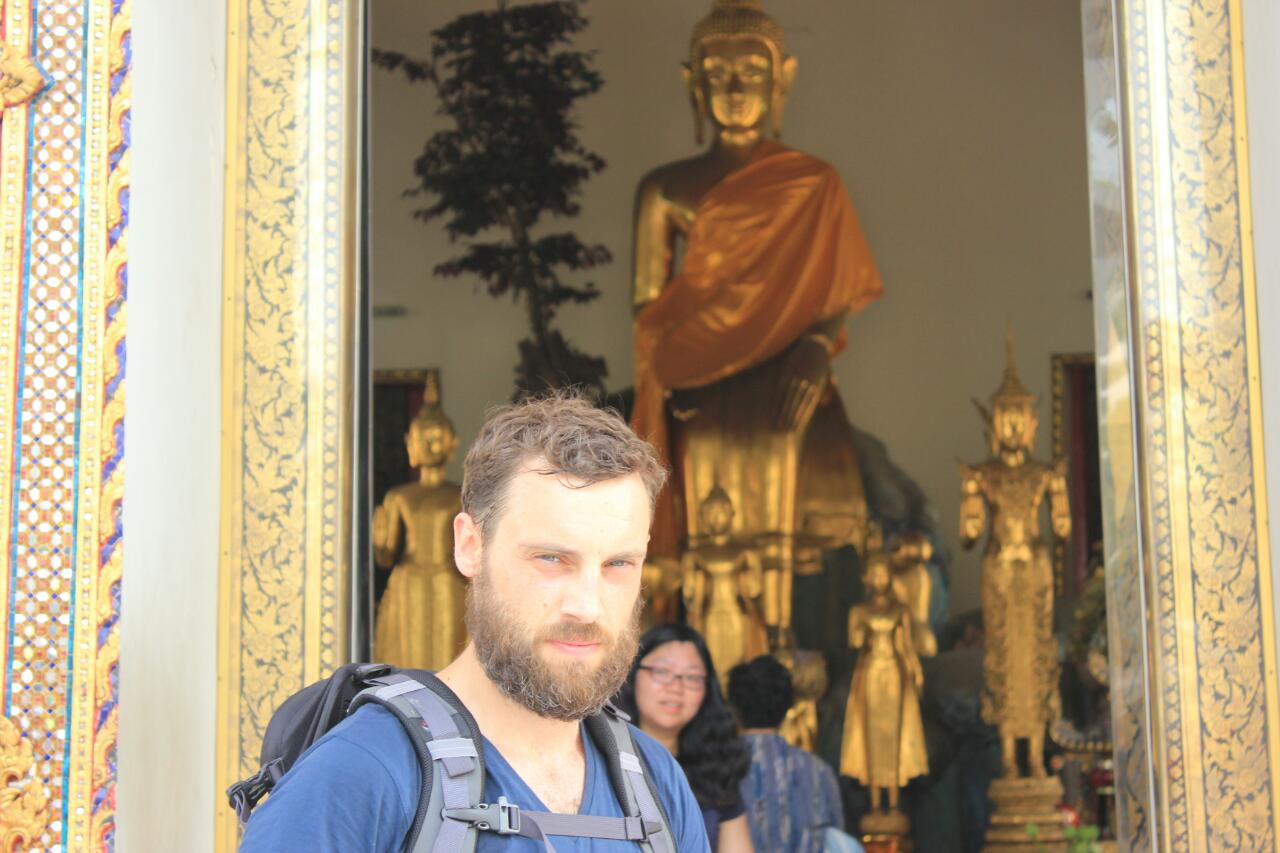