After a short flight from KK we touched down in Bali around 8.30pm and managed to get through immigration quite quickly. We shared a taxi with a guy I’d met on the flight but he’d kind of struck a bad deal with the taxi driver so we ended up getting bit stung on that front, but whatever, live and learn. We arrived at our hotel in Syemeniak and we pretty amazed at the friendliness of the staff and how amazing the hotel was in general. We’d kind of randomly picked out the hotel, but had properly struck gold. For the price we paid (after a nice bit of haggeling) we were living in a proper full service hotel. Clean sheets, towels, hot showers, satellite TV, buffet breakfast included, large swimming pool, pool table – living the good life! That ended up being the reason we stayed so long and did so little!

When we did venture outside the hotel it was usually only to visit a supermarket or go for a bite to eat in the evening. Thanks to the large buffet breakfast and free afternoon tea and cakes at the hotel we were able to skip lunch completely. To be really honest I found that area of Bali, or even Bali in general so overcrowded and stuck in top of itself. There are basically no footpaths so walking was always dangerous and I’d be scared shitless to ride a scooter anywhere there due to constant traffic congestion. It kind of gave me a sense that everything was so cramped and all on top of itself and I kind of felt a bit claustrophobic when outdoors!

We spent 2 days going surfing at the beach nearby, but I’ve already spoken about that! We felt sad at having to leave but we knew we couldn’t stay forever so we organised a taxi to Ubud. We said goodbye to the lovely staff and hotel and set off for the supposed cultural capital of Bali. It was pretty much the same story with crazy congestion, but at least in Ubud you can walk on the side streets and once you get off the main track you’re basically in the countryside.

We managed to hammer out a sweet deal at a homestay, as it’s not peak season the owners are usually a bit more open to bargening and you can really profit with homestay prices already being quite cheap. We had a nice, bright room upstairs at a homestay on a fairly quiet side street. The lovely owner brought us homemade banana pancakes every day and even a generous helping of fruit salad too. The owner even sorted us out with deals for climbing the volcano, white water rafting and our fast boat to Lombok for cheaper than the tourist agents on the street.

When we were in Ubud we kind of made our days work around the weather. In Syemeniak the weather had been hit and miss, but as we rarely left the hotel room it wasn’t such an issue, however in Ubud we really wanted to get out and about. The weather pattern was fairly simple: a nice, warm and strong sun in the morning followed by a gradual build up of humidity towards midday and then monsoon rains in the afternoon. As it was like this everyday we tried to get up early and explore, then retire for the afternoon and go back out I  the evening. There are so many different things to do in the town, for example yoga, which I decided to try after seeing Steffi do it in lots of places. It was great fun and an extremely good way to burn some calories and at the same time relax or chill out. We also went on a really nice walk through the rice fields and the path there was on a ridge between two little valleys so you got a great view of the area and got into the nature of the area a little. 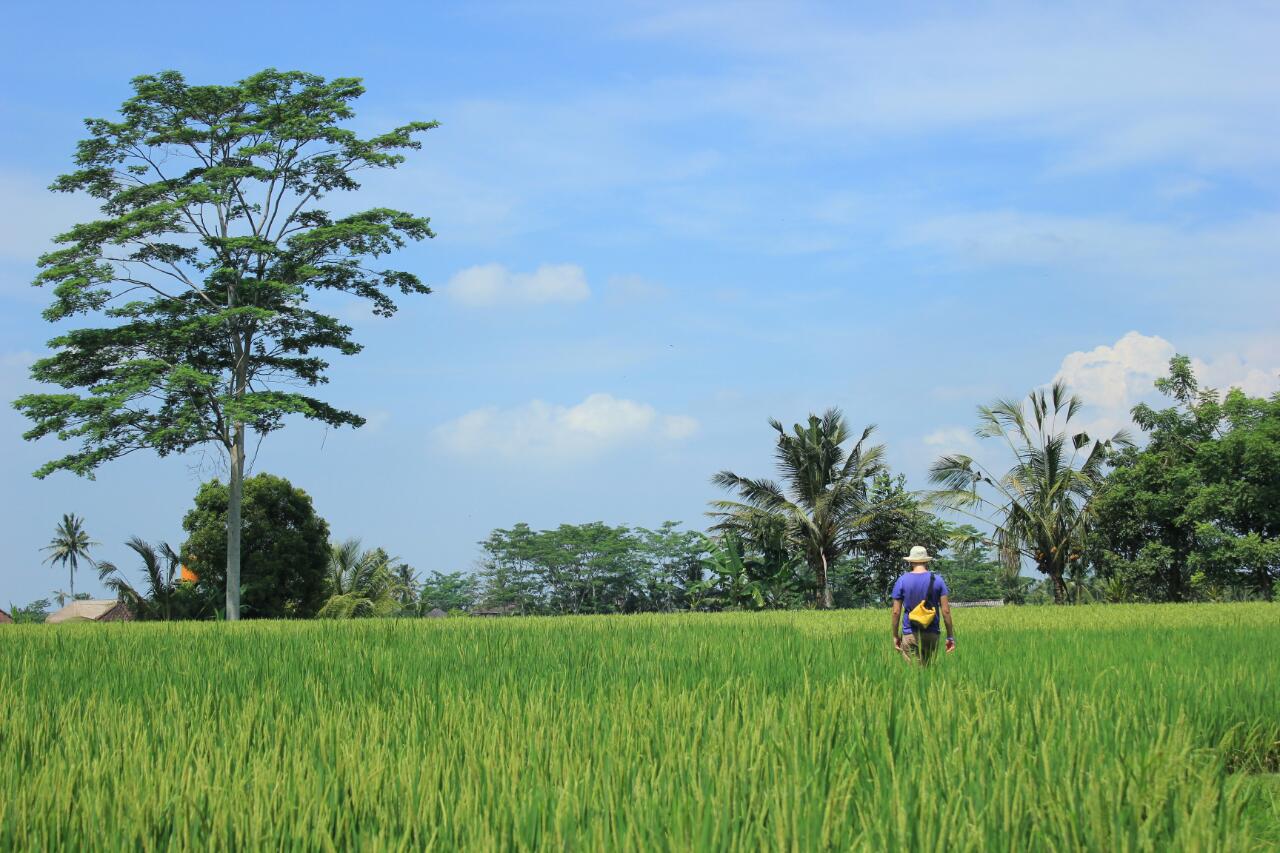 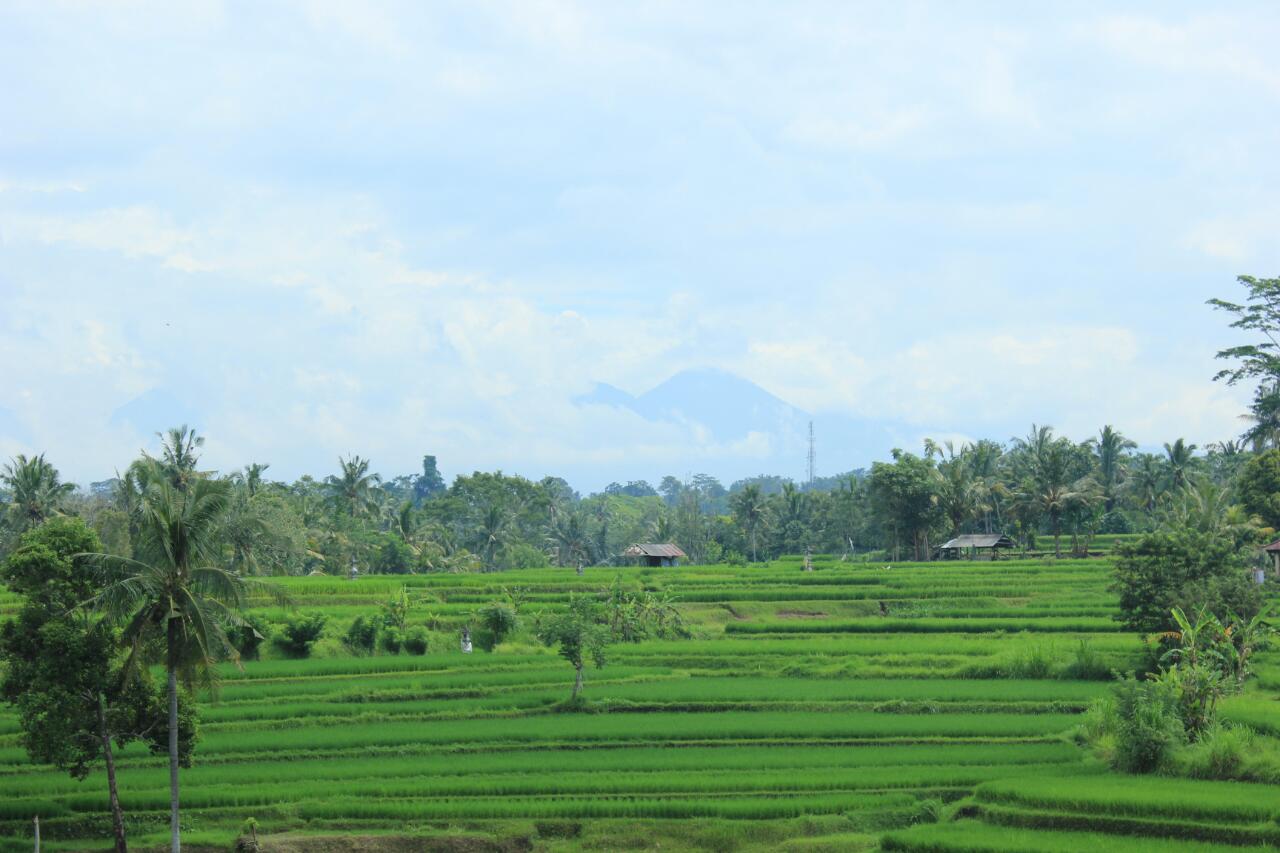 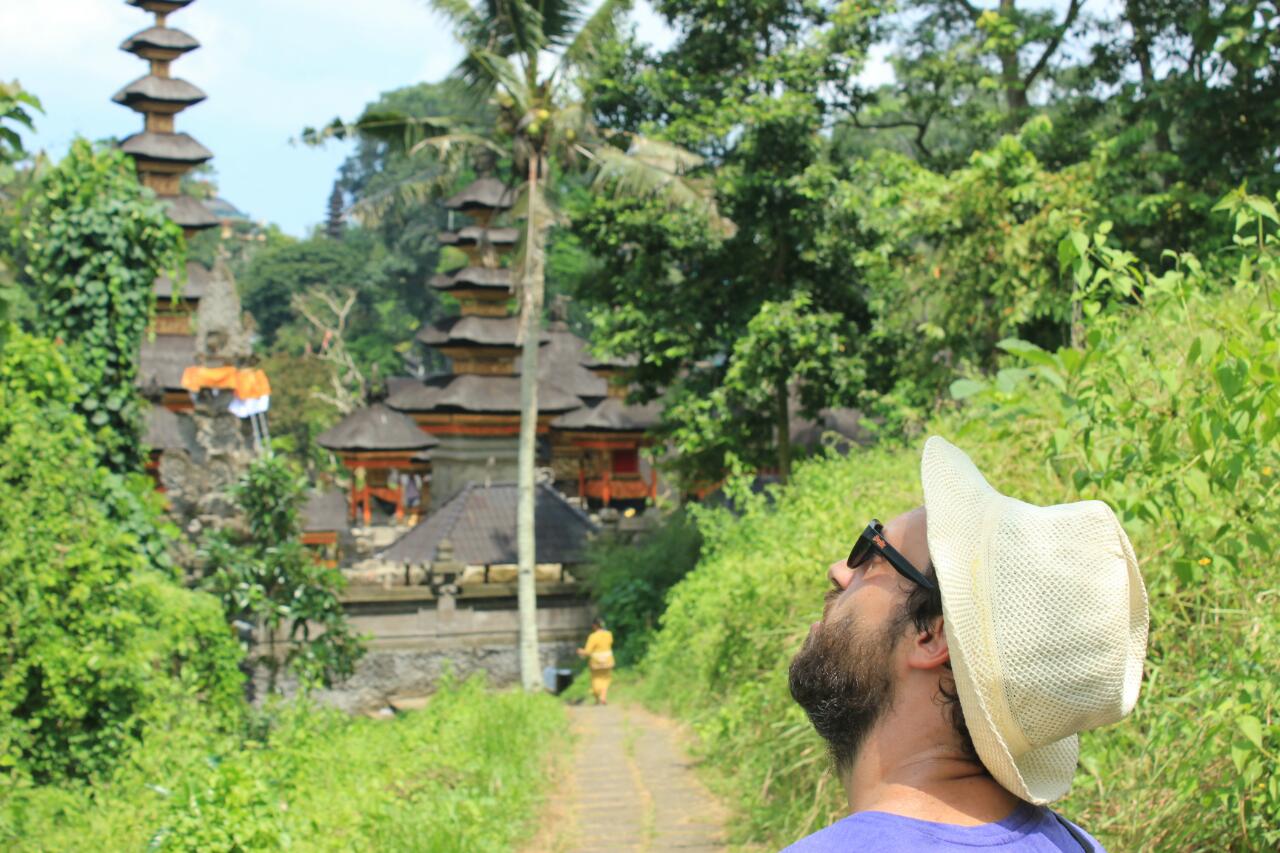 We spent lots of our time (and money) in a little local restaurant called Sopa, which is nevertheless definitely aimed at western tourists. They make great vegetarian food and at amazing prices. It’s so nice to find a place you like when travelling around. Even though a lot of people thing you are just on a big holiday it’s not really the case. That’s why it’s important to find a good place to eat especially when you can so rarely cook for yourself. Sometimes you just need to be able to be sure of what you eat or know that you are going to get a good tasty meal during the day and not be constantly gambling with the menus of various restaurants. As we were getting amazing banana pancakes for breakfast and lunch and dinner wer sorted we were very happy bunnies.

As Indonesia is our last Asian country and our last country before we hit Australia where we’ll have to work a little our speed of travelling has slowed down considerably and the amount of touristy or cultural things we do has gotten less and less. At the same time there are lots of things to do here as I mentioned so we decided to climb the volcano, mount Batu to enjoy a nice sunrise. It involves getting up at 1.45 am and getting picked up at 2 am before being driven to the base of the mountain and starting the trek in absolute darkness at around 4 am. Armed with a touch and a friendly guide, who we decided to call “Nasi Goreng” (he kept sort of singing or saying that) we went slowly but surely up the mountain. It takes 2 hours to get up and the views are just breathtaking. You even see as far as Lombok and we had a perfect view of the volcano on Lombok from on top of our volcano on Bali! Have a look at some of the views, I was wet and sweaty when I reached the top! 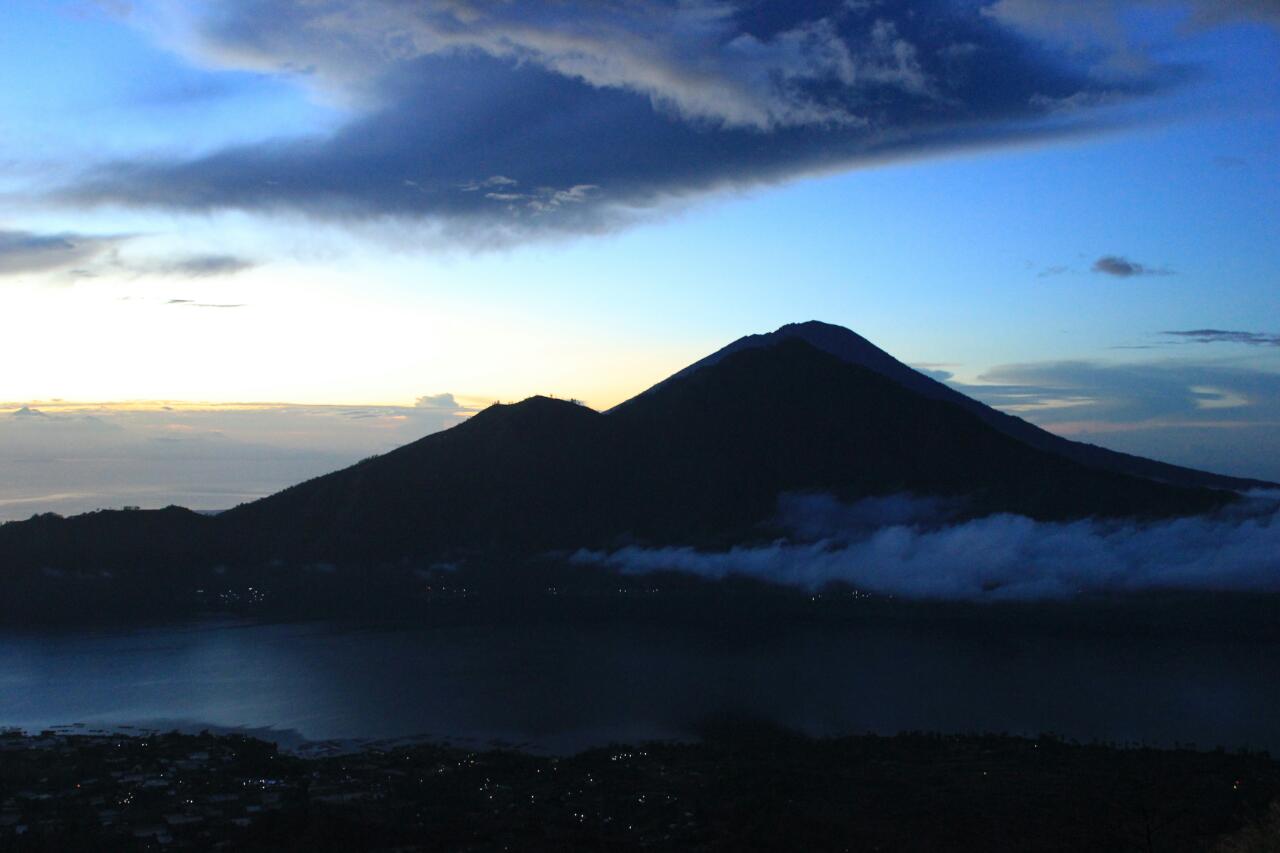 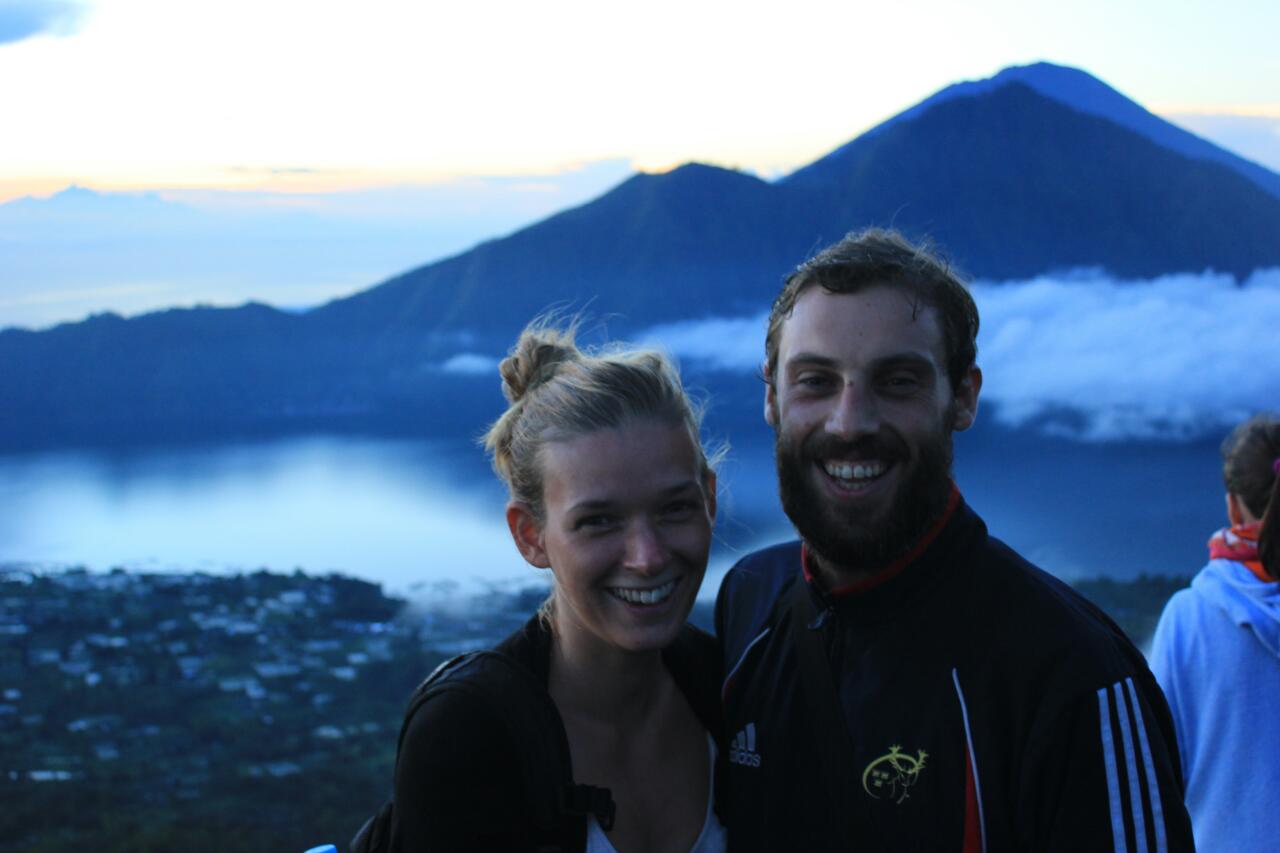 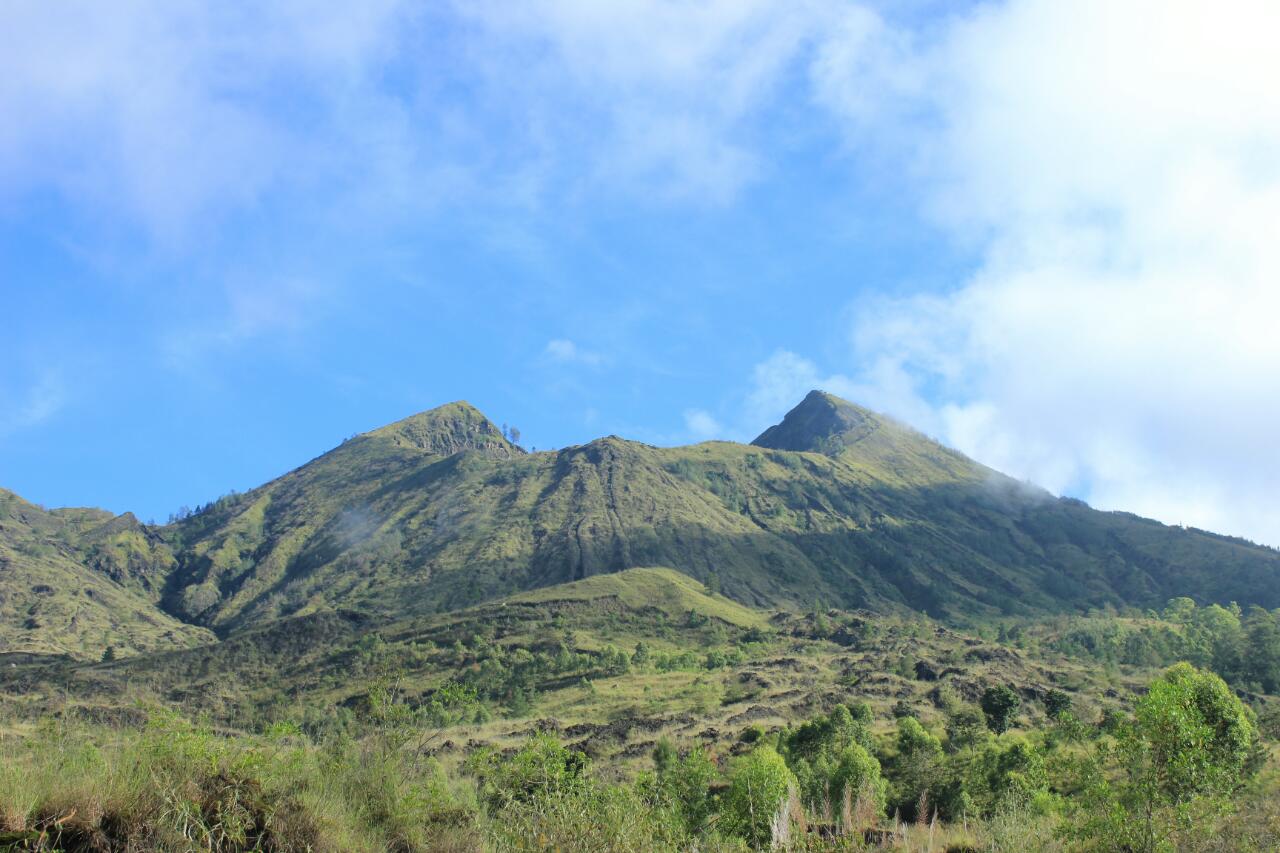 The volcano missing it's top due to eruption some years ago

One other thing we did which actually turned out to be a hidden highlight was white water rafting. Sadly we didn’t get any pictures,  but boy was it incredibly cool. I’d wanted to do it for a bit, but never gotten round to it so far. Getting there and back took ages thanks to the crazy Bali traffic, but that didn’t bother us. Thanks to the homestay boss we’d gotten a super deal on the rafting paying only circa $25 pp. After a short safety briefing we got into the raft. It was made up of our guide, a Chinese dude and us two. About 70% of the people there were Chinese and one of the boats was filled with a few girls who seemed fairly unsure about the whole thing and I had already made my prediction that it wouldn’t take long before they were swimming in the river! Sure enough they did take a plunge or two and it was pretty hilarious to watch. After setting off from the start everything seemed calm and not dangerous at all, but about 10 mins into the journey the heavens opened and I’ve never see harder rain in my life. We were getting wet from the river and from above and it just created a seriously unbelievable atmosphere. Now that we were wet to the bone we could really just go wild in the river. The more it rained the more water was making its way into the river and we could see the rain washing away parts of the banks of the river. Suddenly there were waterfalls cascading down from the sides of some of the cliffs too. We even went under one massive waterfall and it was such a cool feeling.

Now you may be thinking, “hey Donal get to some serious action” & I can deliver. After taking a short break about halfway our guide explained to us that the big 4 metre drop was coming up soon. We were super excited to say the least. Now don’t forget all the while it has been raining cats and dogs and river has turned from blue to Brown with all the mud. Up ahead we see a commotion with men waving and blowing whistles…..they were warning us not to do the jump off the middle. We just about managed to get the raft off to the side and pull up to the bank. This is where the chaos begins. One of the younger guides didn’t quite manage to see the warning in time and in an attempt to steer the raft to the riverbank beside us jumped out and tried in vain to pull the raft to shore. He realised it wasn’t going to happen and just let the raft go with the passangers still in the raft. He had managed to get them at least to go over a side part of the drop which wasn’t as bad and they seemed ok on the other side. We told our guide we were up for the jump too and went over with him directing things. It was a super cool experience and very scary. The power of the river was just immense and some rafts decided against the jump.

Once we got all of the rafts from our company over the drop we continued onwards but our guide warned us that this part would be tricky. The waves were just so incredibly powerful we were doing our best to navigate the rough bends in the river. Turning one corner we were confronted by 2 Chinese guys standing on a massive rock in the middle of the river with the raft jammed up against the rock, but no guide or fellow passangers in sight. They looked pretty distressed, especially the girl. We once again stopped and our guide tied up our raft and went to see how he could help these guys. Long story short we spent 45 mins in the lashing rain watching multiple guides rescue these stranded guys and eventually leveraging the raft out too. It kind of put a downer on things as we were pretty much freezing by this stage, but the free buffet lunch soon helped pick everyone’s spirits up!

We went back to Ubud and decided it was about time to check out some more Indonesian islands…..next stop: Lombok