So if you had have asked me maybe 3 years ago about the prospect of moving to Australia or even just travelling there for a while I wouldn’t have been massively excited about the prospect. Fast forward to present day Donal and things have definitely changed.

After sort of establishing myself in Melbourne it was quite tough to move on again after 5 months and also to bring the adventure to a close for now. On my last night out I had a wild night with some of my closest mates from the rugby team and I was quite emotional as the night ended. I was even more emotional o the first of May sitting in Melbourne airport all alone. I have to admit a few tears squeezed their way out and I was fairly upset at leaving Melbourne. I have to admit that I had a great time at the rugby club even if the “managers” of the team left a bit of a bitter taste in the mouth after almost every game, but the guys at the club were top blokes and the atmosphere was pretty darn good. That was running through my head in the airport and also the thought that I’ll probably never see most of these guys ever again – what a pity.

Alas all good things come to an end and at least I could leave Australia with my head held high, even though there were times when I thought I’d never last as long as I did. Many thanks to a certain Mr. Burke for talking me off the ledge at Christmas, that telephone conversation brought me back from the brink and gave the courage to hold on and fly to Melbourne and the rest is history – good times!!!

Obviously a big influence in my life at the time was my own German version of Arnold Schwarzenegger – we just called him “Big G” in an affectionate way. I was looked after like a friend of many years even though we barely knew each other and Georg played a starring role in my development in Melbourne hooking me into the social system and giving me a place to stay during my time. It really makes a massive difference to have someone to pick you up from the airport and pick you up in life in general, which was much appreciated upon my arrival in Melbourne after a disastrous personal campaign in Europe for me. 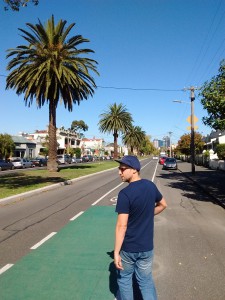 A final sunny day in Melbs

I can definitely say I learned a lot down under and not just the naughty swear words! I can safely recommend it to anyone who wants to experience something different and also if you have a bit of money to burn as it is one hell of an expensive place!

2 thoughts on “A tearful goodbye”